Will the Palestinian Authority dump the shekel? 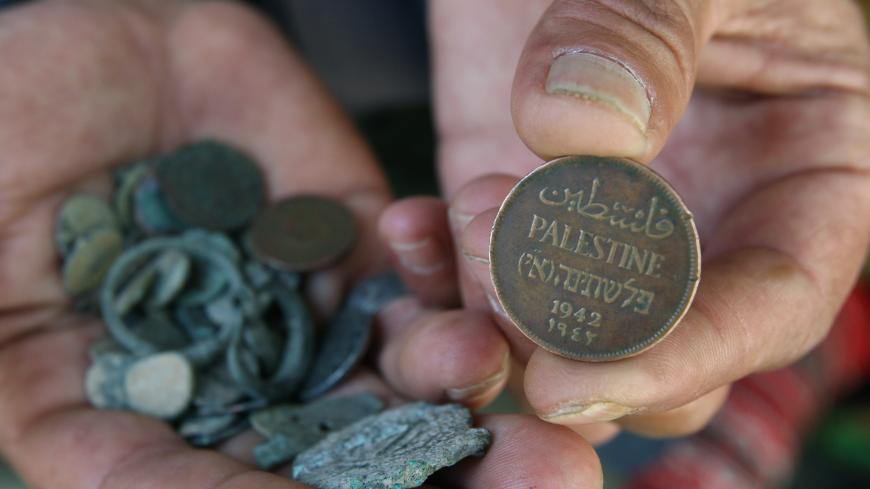 In April 2017, Palestinian President Mahmoud Abbas announced that he was severing ties between the West Bank territory under his control and the Gaza Strip, which Hamas controlled. Now, senior Palestinian Authority (PA) officials have told Al-Monitor that Abbas is preparing to disengage from Israel. The first indication of his intentions became evident in a Feb. 6 PA announcement that it has tasked a committee with formulating operational plans for severing ties with Israel in various spheres, including replacing the Israeli shekel with another currency.

The economic sphere is, indeed, crucial to the continued rule of the PA and even more so to the lives of the Palestinians in the West Bank. Under the 1993 Israeli-Palestinian Oslo Accords and the 1995 Cairo Agreement, the Palestinian economy is inexorably linked with the Israeli economy in virtually every respect: currency, infrastructure, land and air passage, employment of Palestinian laborers in Israel and more. Israel also imposes value added tax and customs tariffs on goods for the PA arriving through Israeli ports and transfers the funds to the Palestinians. These taxes come to hundreds of millions of dollars annually, and Israel uses their transfer on occasion to exert pressure on the PA or to punish it.

The Feb. 6 announcement said that an option is being examined to issue an independent Palestinian currency or to use some other currency in place of the shekel. In the past, trade on the West Bank was primarily conducted using the Jordanian dinar, which was considered a strong and stable currency. The economic crisis in the neighboring Hashemite kingdom in recent years has led, however, to a decline of the dinar and the widespread use of the shekel, including for paying PA employees' salaries in the West Bank and Gaza.

The panel set up to examine the currency issue is unlikely to recommend a shift from the stable Israeli shekel to the Jordanian currency given the vicissitudes of the kingdom’s economy and its need for foreign aid. The PA would encounter additional insurmountable challenges given that the World Bank would be unlikely to approve such a request since the PA is not a sovereign state.

The PA's desire to dump the Israeli shekel is not only a matter of extricating itself from agreements that bind its economy to Israel's. Palestinian and Israeli economic experts point to the difficulty of dealing with the growing strength of the shekel on the global financial market given that a strong shekel erodes the profitability of Palestinian exports.

Avichai Snir of the Netanya Academic College and Infinity Investment Fund noted in an October 2017 article on the Hebrew-language Walla website that Israeli exporters, especially in the high-tech sector, are managing fine with the stronger shekel because their products are unique and in great demand. The relative advantage of Palestinian exporters, however, lies in cheaper production costs — in particular cheaper labor in the West Bank compared to in Israel — so the strong shekel has dealt them a fatal blow.

Writing in “Middle East Economy,” published by the Dayan Center at Tel Aviv University, Yitzhak Gal, an expert on the region’s economic history, explains that the Palestinians’ economic integration with Israel has created a cost-of-living similar to Israel’s, while their average pay is far lower than that of Israelis. According to Gal, this situation has created a major distortion that will be difficult to remedy without disengagement from the Israeli economy and embarking on an independent economic course to the extent possible.

Will the PA take the risk of issuing its own currency, with all the attendant monetary implications, and probably without international backing? Moreover, would such a currency have any value on global financial markets?

A PA source told Al-Monitor that the Palestinians have wanted to sever ties with the Israeli economy for a decade, but the issue was always set aside pending resolution of the overall Israeli-Palestinian conflict. “Now that everything is clearly on the table, that the Oslo Accords are a thing of the past and there’s no diplomatic process in the foreseeable future, the conclusion is that independent [economic] action is required,” said the source, who spoke on the condition of anonymity.

“The Oslo Accords were from the start interim agreements intended to lead to the establishment of a Palestinian state within five years from the White House signing [in September 1993]. It’s been 25 years, and the PA is forced to operate, or actually to survive, under agreements most of which have become irrelevant and in some cases have even become an immense burden,” said the source.

Nonetheless, he added, the Palestinians fully understand the consequences, explaining, “A Palestinian currency that is not negotiable and is not accepted by banks or international corporations would result in a recession and inflation, which, in turn, would force Palestinian exporters and importers to flee to alternative currencies.”

According to a September 2016 report on the Palestinian economy compiled by the UN Conference on Trade and Development (UNCTAD), if the PA were freed of Israel’s 50-year occupation, its economy would be twice its current size. The report’s authors explain that the Palestinian economy is hobbled not only by its dependence on remittances from Palestinians working in Israel, but also on agricultural output. West Bank farmers have a hard time exporting their products given the limitations on their mobility imposed by Israeli roadblocks and other restrictions. Palestinian merchants encounter the same problems, with transportation and handling costs taking a hefty chunk out of their profits.

Since the UNCTAD report's release, the situation has deteriorated, with the PA’s economy weakened even further. It is therefore unclear why Abbas has chosen to examine economic disengagement from Israel at this time. Is he seeking to break Israel’s chokehold, which he views as preventing an economic turnaround? Alternatively, is he acting out of despair and anger at Israel?

An Israeli security source told Al-Monitor that Abbas’ recent decisions have been hasty and with only one goal in mind — to convince the Palestinian people that he has answers to the grim situation in which he finds himself through no fault of his own. With an economy weak and crying out for help, however, the risk to the PA of economic disengagement is far greater than the economic fruit it might reap in the very distant future, if at all.