Palestinians worry that investigations against Israeli Prime Minister Benjamin Netanyahu will push him to adopt an even more settlement-friendly policy. 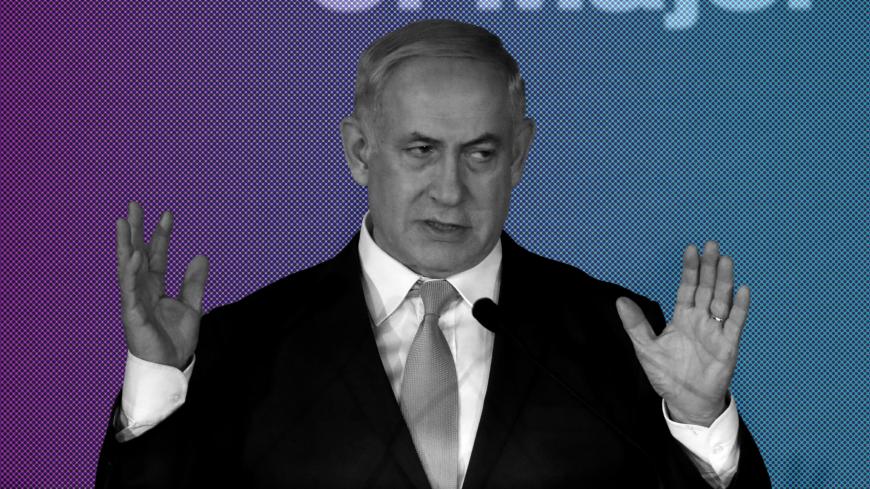 Palestinians were glued to their TV sets on Feb. 13 when the Israeli Police published its recommendations to indict Prime Minister Benjamin Netanyahu over charges of bribery. Netanyahu is suspected to have accepted gifts from US-based Israeli billionaire Arnon Milchan and to be involved in a give-and-take deal with Arnon Mozes, the publisher of Yedioth Ahronoth daily.

For a very brief moment, the Palestinians felt things were going their way. But a senior PLO source close to Palestinian President Mahmoud Abbas expressed concern. He said he was worried over what Netanyahu has in mind in order to prevent an indictment or a trial. He and others in the corridors of power in Ramallah are concerned that Netanyahu will adopt an even more bellicose policy, seeking at any cost to solidify his right-wing base.

The Palestinian leadership suspects that Netanyahu will opt for a major expansion of settlements in the West Bank in order to jeopardize any sovereignty of a Palestinian state. Netanyahu might also choose to annex an Israeli settlement such as Maale Adumim, a step that may set the region on fire. Ramallah also fears that Netanyahu will generate new cycles of violence against Hamas in the Gaza Strip, and that he will order a so-called preventive strike in Lebanon against Hezbollah. Netanyahu could also say out loud that he rejects a US peace initiative.

According to this senior PLO official, the Palestinian leadership is currently preparing a counteroffensive, which would include a warning campaign about such Israeli policies. The campaign would be coordinated by Secretary-General of the PLO Executive Committee Saeb Erekat, targeting the Arab partner states, mainly Egypt, Saudi Arabia, Jordan and Morocco. Similar diplomatic campaigns would also be launched in Europe and elsewhere, especially in Moscow, Brussels, Paris, Berlin and even Washington.

Alongside these campaigns, Ramallah plans to call an emergency meeting of the Arab League. The Palestinians are hoping for a coordinated Arab move at the UN Security Council against Israeli annexation policies.

On the ground, the leadership in Ramallah is already placing all Palestinian security forces on high alert.

A senior Israeli Ministry of Foreign Affairs official brushed off these Palestinian observations as a mixture of Palestinian paranoia and propaganda. The official with direct access to Netanyahu told Al-Monitor that in the daily professional contact with the prime minister, one could not detect anything out of the ordinary.

Netanyahu and his close staff are preparing for a meeting in the Oval Office with US President Donald Trump on March 5. Generating active US policy against an Iranian foothold near the Golan Heights is at the top of Israel’s agenda. So is the threat of an ongoing supply and the manufacturing of sophisticated missiles for Hezbollah in Lebanon. Netanyahu wants Trump to intervene in the region more assertively, especially vis-a-vis Russian President Vladimir Putin.

The Israeli source also noted that Israel is open to US ideas on promoting a US peace initiative, conditioned on Israel being recognized by the Palestinians as a Jewish state, and by Israel maintaining long-term security control of the West Bank.

He added that given the danger of a humanitarian crisis in Gaza, Israel has been asking the United States not to stop the rehabilitation of the Gaza Strip.

On the settlements issue, Netanyahu will claim that expansion will take place mainly in the Jerusalem area, and that he is committed to halting any legal effort for annexation of parts of the West Bank.

Still, reality is most probably somewhere in between the Palestinian fears and the Israeli confidence of “more of the same.” Yet an unstable political situation in Israel could generate also regional instability. And further turbulence in Netanyahu's investigations promise exactly that.