Contrary to the narrative that Iran wants to drag Israel into the Syrian war, Tehran appears to have no incentive to do so. 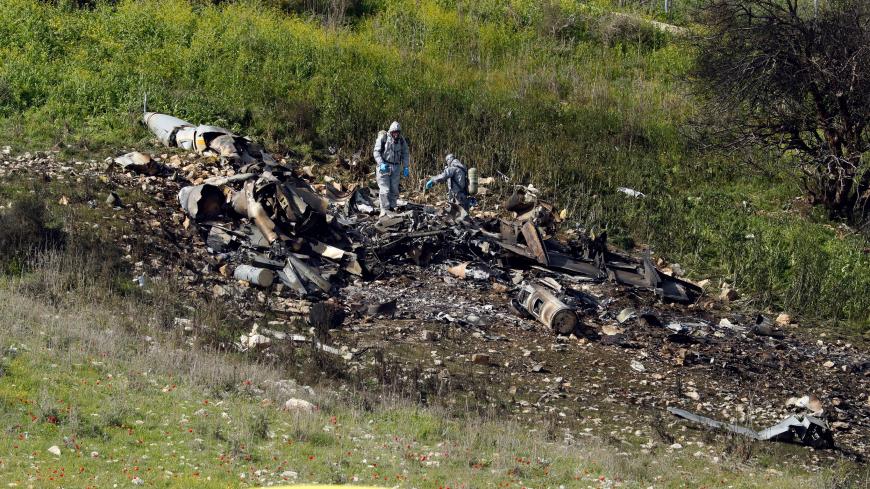 A picture taken in a northern Israeli kibbutz shows the remains of an Israeli F-16 that crashed after coming under fire by Syrian air defenses during attacks against "Iranian targets" in the war-torn country, Harduf, Israel, Feb. 10, 2018. - JACK GUEZ/AFP/Getty Images

The downing of an Israeli F-16 by the Syrian military on Feb. 10 has once again triggered speculations about a possible direct confrontation between Iran and Israel. Shortly after the incident, Israeli Prime Minister Benjamin Netanyahu said that Iran “violated our sovereignty, and infiltrated its drone into Israeli airspace from Syria.” Referring to his previous “warnings” about Iran’s presence in Syria, he also stressed that “Israel will defend itself against any aggression.” Meanwhile, the Israeli army announced that in a retaliatory operation it had struck a number of sites in Syria, including “four Iranian targets near the capital Damascus.”

Reacting to the Israeli claims, Iranian Foreign Ministry spokesman Bahram Ghassemi rejected Iran’s involvement in these events, saying that “the claim of the Zionist regime that an F-16 has been shot down and the involvement of an Iranian drone are too risible to be discussed. The Islamic Republic of Iran has an advisory presence in Syria at the request of its legitimate government.” The following day, Secretary of Iran's Supreme National Security Council Ali Shamkhani labeled the claims made by Tel Aviv as “a lie,” also underlining that Iran’s presence in Syria is “advisory, not military.”

Official statements aside, to achieve a better understanding of what’s really going on between Iran and Israel in Syria, one must first assess whether Iran has the necessary means and genuine political will to trigger escalation in Syria.

First, it should be noted that as is also the case for Russia, Iran’s leverage over the Syrian government is not complete; as such, considering Iran responsible for all that happens in Syria would be misleading. In fact, as the Syrian government has managed to extend its rule to a large part of the country thanks to its recent achievements on the battlefield, it appears to feel more capable of independent maneuvering or adopting independent positions. As such, it is asserting that it commands real authority in the country and that it is able to independently exert it either now or in the post-war period.

As far as Iran is concerned, there have been at least two cases of applying this approach by Damascus. First, while Iran has so far taken a modest stance regarding Turkey’s military operation in northern Syria, Damascus has strongly and repeatedly condemned the move, calling it an act of “aggression” that could face the Syrian army’s military response. Second, some reports published in the Iranian media recently indicated that Bashar al-Assad’s government is not willing to consider a role for Iran in the post-war reconstruction of Syria, instead trying to forge an agreement with the Russians on this issue.

On the other hand, having a deeper look at the current situation, one can reasonably argue that a new escalation in Syria is not in Iran’s interest. First of all, if one accepts the argument that the main reason behind Iran’s presence in Syria has been to preserve Assad’s government, it could be said that Tehran has never been closer to completely achieving this key goal. At present, Assad’s forces have managed to retake about two-thirds of the country from the rebel and terrorist groups and are continuing to advance even further in areas such as Idlib and Deir ez-Zor. In such circumstances, it wouldn’t make any sense for Iran to open a new front in the south, diverting the attention of pro-government forces from their operations elsewhere in the country.

Second, any direct confrontation with Israel in Syria could easily get out of hand, escalating into a full-scale conflict between Tehran and Tel Aviv, which in economic terms would mean huge costs for both sides. As the Iranian government is currently attempting to revive its economy and to overcome a complex set of economic problems, it would be unwise for Tehran to be willing to shift its financial resources to a new conflict abroad.

Third, it’s now seen as a fact that the United States and its European allies are trying to convince Iran to enter a new set of negotiations, this time over its regional activities and missile program. The pretext for this proposal, which has so far been faced with a strong negative response from the Iranian side, is that Iran’s activities are a threat to regional peace and stability. Mindful of this, Iran would naturally not be willing to provide the West with a fresh excuse to increase pressures by igniting a new escalation in one of the main regional hotspots, namely Syria.

Fourth, Iran is fully aware of the extent of ties its main partner in Syria — namely Russia — has with Israel. In fact, from the very beginning of its military presence in Syria, Moscow has been trying to assure Tel Aviv that its core interests as well as security will be preserved. In this vein, any direct act against Israeli interests could put Iran’s growing partnership with Russia at risk; a result that would definitely not be favorable for Iran. Pointing to the recent developments, Russia’s deputy ambassador in Tel Aviv, Leonid Frolov, said, “In the case of aggression against Israel … Russia, too, will be on Israel’s side.” However, he also appeared to dismiss the idea that Iran had deliberately tried to stoke escalation by launching a drone into Israeli airspace, casting doubt on the alleged Iranian origin of the unmanned aircraft.

All in all, it appears highly unlikely that the Golan incident was part of an “Iranian agenda” to seek heightened confrontation in Syria. As such, Israel’s claims of Iran’s involvement in the events of Feb. 10 should rather be viewed as part of its continued desire to “securitize” Iran. The aim of the latter remains the same: to increase international pressure on the Islamic Republic to abandon its missile program and regional activities.