More than anything, the situation in Afrin puts on full display the deep and lingering mistrust between Iran, Turkey and Russia. 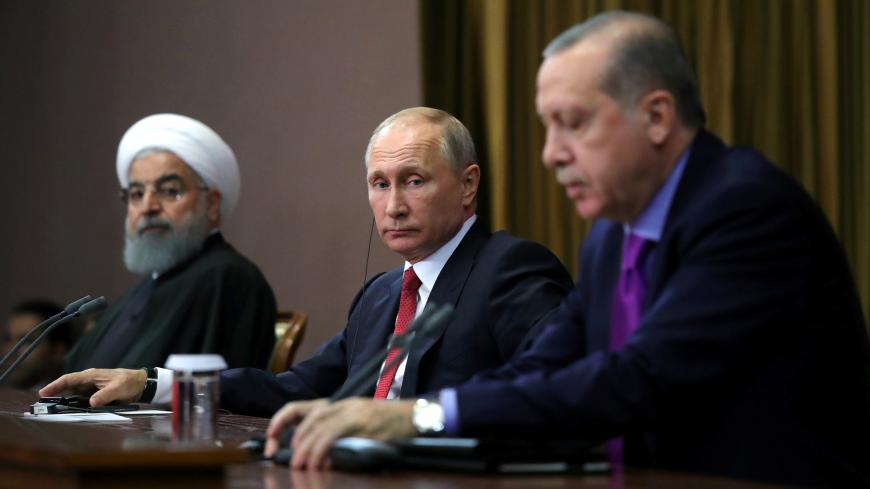 Almost a month after Turkey’s launch of Operation Olive Branch in the northern Syrian district of Afrin, there is no clear outcome. Since the beginning of the campaign, Turkey’s post-Afrin objectives remained a matter of serious concern to other players — mainly Iran — whose reaction was to distance itself from supporting the Turkish assault while simultaneously refraining from supporting the Kurdish People's Protection Units (YPG) in the area.

To Iran, Turkey’s intervention will only complicate the already-complicated situation in Syria and weaken the Sochi peace process that already witnessed a major setback in the Jan. 28 meeting in Russia, when the majority of the Syrian opposition boycotted the conference.

As such, a meeting between the presidents of Turkey, Russia and Iran is expected to take place in Istanbul to discuss the latest development, but a clear time frame for this meeting has yet to be set. The trilateral meeting will follow a similar meeting that took place in Sochi on Nov. 22, 2017, and laid the framework for cooperation between the three states on the Syrian crisis.

According to an Iranian official who spoke on condition of anonymity, Tehran has advised Ankara to be aware of being dragged into a war of attrition in Afrin. The official told Al-Monitor, “The point of view from Iran is that the Kurdish fighters have their lines of support, and many parties might want to see Turkey stuck in a quagmire. Therefore, it’s better to try to contain this adventure or else who knows how much it will drain the Turkish army.”

Tehran is convinced that the Kurdish fighters in Afrin aren’t acting on their own and are receiving generous assistance from various sides. Yet it’s also clear that any serious setback to Turkey in Afrin would mean a new status quo in the north of Syria, and thus also renewed hopes for the Kurds to revive their demand to rule over a coherent entity along the Turkish border. Besides, in the case of a Turkish failure, there will also be much anticipation of a stronger US footprint in Syria that will pose a threat to Iran and its allies’ presence in nearby Aleppo.

The three pillars of the Astana process — namely Russia, Turkey and Iran — are each on a different side in the battle for Afrin, despite some intersections between these actors. This might be a factor that could cause cracks in the framework of the joint path that emerged between the trio in the past few months as a serious attempt to reach a peaceful solution for the ongoing conflict in Syria. While Turkey is on the offensive, Russia is trying to preserve its ties with Ankara while maintaining strong relations with the Kurds.

One military source near Afrin told Al-Monitor on condition of anonymity, “The Russians are mastering the game of contradictions; while not showing opposition to the Turkish side, they didn’t desert the Kurds [and leave them] alone in this battle.” The source added, “The Russians are transporting Kurdish fighters from Hasakah and Qamishli to Afrin. Besides, it would be interesting to know how the Kurds got their anti-tank missiles.”

The Iranians had been trying to broker a deal between the Kurds and the Syrian army to secure the latter’s deployment in the area alongside Kurdish fighters and some groups that are allied with Iran. The Iranian effort is aimed at exiting fighting with the best results possible; preserving its position as a friend to both the Syrian Kurds and Turkey; and, at the same time, barricading the path for other parties who might want to invest in the fighting in Afrin to enhance their position in the Syrian crisis — namely, the United States.

The military source near Afrin told Al-Monitor that alongside the Kurdish fighters defending the city were some Arab Syrian fighters who are known to be affiliated with Iran. The source explained that those militants were responsible for making sure that the Turkish troops don’t cross toward other areas and therefore were armed with anti-tank projectiles to prevent any such incursions. There are serious concerns on both the Syrian and Iranian sides that Turkey might aim to mix the cards once again in northern Syria and take the whole situation back to square one.

Separately, a Turkish military convoy reached the hill of al-Eis to the southwest of the city of Aleppo on Feb. 5, but only after being attacked by militants on two occasions. According to an official Turkish statement, two soldiers were killed when militants launched a rocket and mortar attack on the troops. However, the statement did not specify who the militants were. The Turkish entry into the area was aimed at setting up a new observation point as part of the Astana agreement with Iran and Russia on the creation of de-escalation zones. Under the tripartite deal — aimed at reducing violence — Turkey reportedly agreed to set up a dozen observation posts in Idlib and neighboring provinces.

Yet, despite the agreement, such observation posts might have a negative impact on the Syrian government forces' advance toward Idlib. It is therefore not clear how both Iran and Russia are going to deal with the situation, and whether the de-escalation zones are going to survive the apparent conflict of interests. Once again, this gives a clear indication of the level of mistrust in the field among the big players in the Syrian conflict — and the impact of such mistrust on the bigger picture in the war-torn country.