The Assad regime’s territorial gains and the Turkish offensive in Afrin are conspiring to keep the world’s largest aid donor on the sidelines. 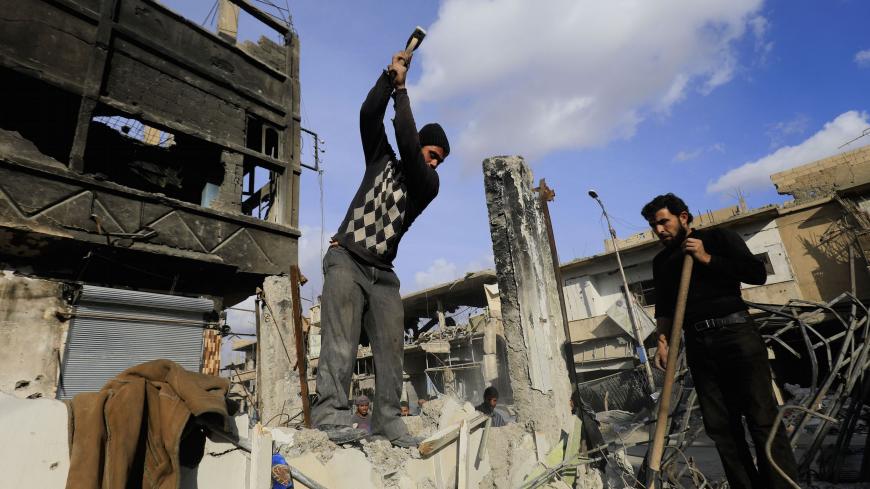 Syrian men work on reconstructing a damaged building in the northern Syrian city of Raqqa, Jan. 16, 2018, after a huge military operation, led on the ground by Kurdish fighters and in the air by US warplanes, defeated jihadis from the Islamic State but also left the city completely disfigured. - GETTY/Delil Souleiman

The Bashar al-Assad regime’s political and territorial gains and the Turkish offensive in Afrin are dealing a double blow to the United States’ ability to get involved in rebuilding Syria.

Washington’s reluctance to help Assad cement his hold on power is ensuring that the world’s largest aid donor remains on the sidelines of international reconstruction efforts. But even short-term humanitarian relief is in jeopardy following Turkey’s incursion into northern Syria to battle US-backed Kurdish forces last month.

Speaking today at a Center for Strategic and International Studies (CSIS) event, Karen Decker, the director of the State Department’s Syrian Transition and Response Team, lambasted Turkey’s ongoing crackdown on nongovernmental aid organizations as an “emotional response” to the US support for the Kurds. Decker went on to describe Turkey as Washington’s “higher partner” compared with the Kurds, but bluntly said it was “incredibly short-sighted in how they have responded to humanitarian and stabilization assistance that’s going into western Syria.”

“I think that’s because there’s a recognition at some level that they don’t want another 2 million refugees on top of the 3.5 million they’ve already got,” she said.

The lack of political consensus and stark geopolitical realities hampering Syria’s reconstruction also prompted Decker to relay a sobering message to Raqqa’s civil council during a visit last week alongside Mark Green, administrator of the US Agency for International Development, and Central Command chief Joseph Votel.

Decker said she warned Raqqa’s local leaders that they were in “tough times because nobody is lining up to rebuild Raqqa and it could be years that every single day you are hit in the face with the same level of destruction that you had the day before because we are not going to empower any part of the Assad regime.”

The United States is the largest bilateral donor of humanitarian aid to Syria, offering almost $7.7 billion since the start of the conflict in 2011. The US Agency for International Development (USAID) also maintains trust funds in Aleppo and southern Syria to provide stabilization assistance for provinces destroyed by seven years of war.

Separately, the Defense Department is providing demining and other stabilization services in Raqqa, the former capital of the so-called Islamic State (IS). The department, however, does not have a formal stabilization fund for Syria, despite its stated intention to keep troops in the country following the defeat of IS.

“We’re working hard to get a legislative proposal,” Mark Swayne, the acting deputy assistant secretary of defense for stability and humanitarian affairs, said at the CSIS event. After getting approval from the White House budget office, he said, the proposal will be sent to Congress.

In the absence of a formal stabilization fund, Secretary of Defense James Mattis recently authorized $5 million in humanitarian and civic aid for Syria on top of the $15 million authorized last year.

The outlook for longer-term reconstruction efforts in Syria also remains uncertain as Washington refuses to provide assistance that would benefit the Assad regime absent a political solution to the conflict. So far, nine rounds of UN-sponsored peace talks haven’t made much progress on that front.

“It’s not even close to a place where you can have a realistic discussion about the reconstruction of Syria right now, frankly,” Maria Longi, USAID’s senior deputy assistant administrator for the Middle East, said at the CSIS event.

“If you take Iraq as an example, which is a whole different space — there’s a central government, they’re further along in the local governance structure — if you look at that, they’re having an initial reconstruction conference next week,” said Longi, who joined Decker on the trip to Raqqa last month.

US estimates on the total cost of reconstructing Syria range from $200 billion to $350 billion.

While laying out Washington’s post-IS Syria strategy last month at a speech at the Hoover Institution, Secretary of State Rex Tillerson vowed that the United States, the European Union and “regional partners” would not provide international reconstruction assistance “to any area under control of the Assad regime.”

“We ask all stakeholders in Syria’s future to do the same,” Tillerson said at the time.

Tillerson’s remarks came after Republican and Democratic leaders on the House Foreign Affairs Committee in December released legislation, the No Assistance for Assad Act, prohibiting nonhumanitarian US assistance from flowing to territory controlled by the regime. The bill specifically prohibits multilateral institutions such as the United Nations, World Bank and International Monetary Fund (IMF) from using US funds to assist the Assad regime in reconstruction efforts. A congressional aide told Al-Monitor that lawmakers introduced the legislation due to fears that the World Bank and UN Development Program could engage with Damascus.

The World Bank and IMF typically provide loans and other support to help the central governments of war-torn countries rebuild. But Adnan Mazarei, the deputy director of the IMF’s Middle East Department, told Al-Monitor that any meaningful reconstruction effort requires meaningful buy-in from all segments of society.

“Successful reconstruction requires a vision that is shared across the country with people feeling that vision addresses their needs and concerns and takes account of their grievances,” Mazarei said in a recent interview. “Success requires a shared vision and a sense of legitimacy of the institutions. Successful reconstruction is not just about rebuilding bridges and roads. It is about creating a social consensus.”

Others argue the United States could help the situation by ending its support for rebel groups and allowing trade and private sector investment to resume, even if it’s under Assad regime control.

Joshua Landis, the director of the Center for Middle East Studies at the University of Oklahoma, said that prior to the war, “roughly a little less than $2 billion from Beirut to Jordan [went] through Syria’s highways.”

“All of that trade has stopped,” Landis told Al-Monitor. “There was a free trade zone on the Jordanian border that has several factories, all of which has been stripped by rebel occupation, all of which employed thousands of people, had very little to do with the government, everything to do with local merchants.”

“Of course it’s helping the Assad government if you open trade,” Landis acknowledged. “But it also is helping your average Syrian who’s impoverished.”

Decker said the United States is encouraging the UN envoy for Syria, Staffan de Mistura, to resuscitate the stalled peace process by incorporating more elements of Syrian civil society still living in the country rather than the current opposition negotiating teams, which largely reside abroad.

“We’ve got to get a political process moving and everybody identifies that as the thing that needs to happen next and everyone’s really sketchy on how that’s going to happen,” Decker said in response to a question from Al-Monitor. “One thing that I think is extremely helpful in how the political folks are looking at the next Geneva process … is the idea that it will not be limited to largely exile-based Syrian political groups.”

“There needs to be a role for the people who are currently inside Syria keeping the peace,” she added.

Even as the United States stays out of Assad-held territory, the regime’s Russian, Iranian and Chinese backers have their own plans. Melissa Dalton, the deputy director for CSIS’ International Security Program, said stabilization and longer-term reconstruction efforts are both “inherently more of a political task.”

“The Iranians, the Russians, the Chinese are looking quite closely at opportunities in Assad-controlled territory,” she said.

The Russians, for example, have contracted out a private security firm to protect an Assad-held oil facility, in exchange for 25% of production revenue, and China has agreed to invest $2 billion in Syria’s industrial parks.

Correction: Feb. 6, 2018. A previous version of this story incorrectly reported annual trade between Lebanon and Jordan through Syria at $200 billion instead of $2 billion.