USAID has appointed a special representative for the beleaguered minority group following intense pressure from the vice president. 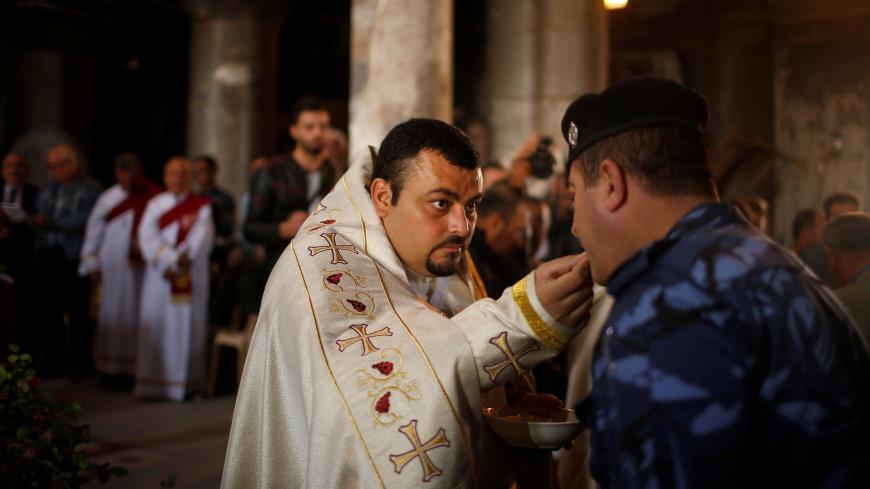 Displaced Iraqi Christians now have their own special liaison to the premier US aid agency, thanks to pressure from Vice President Mike Pence.

USAID Administrator Mark Green has appointed Max Primorac as special representative for minority assistance programs to oversee the distribution of US aid for Iraqi Christians and Yazidis as they seek to rebuild their lives.

“To ensure help goes when and where it’s needed most, USAID has sent a special representative for minority assistance programs to work with churches directly on how to best focus our attention,” a White House official told Al-Monitor. The official also said the Donald Trump administration “has also dedicated $145 million to support persecuted religious communities rebuilding in Iraq.”

The White House official also said the Trump administration is prioritizing US “refugee admissions for those who face such extreme faith persecution that they can’t return to their home country.”

Republicans in Congress and minority rights advocates have long complained that the United States and the UN have not done enough to assist Iraqi Christians displaced by the genocidal rampage of the Islamic State (IS). But critics believe things are finally starting to turn around.

“Aid has been slowly trickling out,” said Nina Shea, a senior fellow at the conservative Hudson Institute, who has pushed the Trump administration to do more to support Iraqi Christians. “USAID didn’t seriously tackle the problem until a month ago” when it appointed Primorac.

The US Consulate in Erbil tweeted out a picture of Primorac meeting with religious minority groups Sunday.

Despite its pro-Christian rhetoric, the Trump administration has only admitted 23 Christian refugees from the Middle East so far this year as it cracks down on migrant flows to the United States, according to the Evangelical Immigration Table, a pro-immigrant Christian coalition. Secretary of State Mike Pompeo announced earlier this month that the United States will lower the maximum number of refugees it accepts from 45,000 this year — an already historic low — to 30,000 next year.

Last year’s State Department Report on International Religious Freedom says there are some 250,000 Christians in Iraq, most of whom live in the Ninevah Plains and Iraqi Kurdistan — down from 800,000 in 2002 before the US invasion.

Stabilization aid aims to restore basic services such as electricity, running water, temporary shelter and health services so displaced people can return to their homes and resume some semblance of a normal life.

Primorac previously oversaw stabilization and reconstruction projects in Iraq during the George W. Bush administration. More recently, he served as president of the Institute for Stabilization and Transition before leaving in February to become a senior adviser for USAID’s Middle East bureau. He became USAID’s envoy for Iraqi minority groups in August.

Notably, Primorac has made common cause with Rep. Chris Smith, R-N.J., in urging the United States to do more to specifically target assistance for Iraqi Christians.

Smith has held at least 10 hearings on the issue. The congressman used his most recent hearing last year to highlight an unsolicited stabilization proposal submitted to USAID by the Nineveh Reconstruction Committee, a collective of Iraqi Christian groups. Primorac helped draft the $22.5 million proposal to “rehabilitate over 9,000 partially damaged homes in seven towns” in his capacity as secretary and treasurer of the Nineveh Reconstruction Committee’s sister branch in the United States.

“Personnel is policy,” Smith told Al-Monitor. “You get the right people in the gatekeeper positions with a commitment.”

“Personnel is policy,” Smith told Al-Monitor. “You get the right people in the gatekeeper positions with a commitment.”

Smith has been instrumental in pushing for USAID to divert US funding streams directly to Iraqi genocide victims rather than funding UN-backed stabilization projects, which he argues have been ineffective.

Still, Trump picked a career USAID staffer, Michael Harvey, for the post immediately above Longi’s position in June. Harvey praised her “knowledge and dedication acquired over a long and distinguished career with the US government” during his confirmation hearing before the Senate Foreign Relations Committee last week.

“I think the vice president wanted something to happen in a very speedy fashion and was disappointed to hear that was not the case and received a lot of feedback from Iraqi Christians here in the United States and back over in the Middle East,” Philippe Nassif, the executive director of In Defense of Christians, an advocacy group that supports Pence’s minority aid agenda, told Al-Monitor.

“They were getting stood up and I think that bothered him and he just had to come out and make some changes at USAID and show that they’re deeply engaged,” said Nassif.

Pence, who has strong ties to Christian advocacy groups, first vowed to divert aid streams from the UN directly to Iraqi Christians and Yazidis in a speech before In Defense of Christians last year.

The day after Smith’s op-ed came out, Pence directed Green to travel to Iraq to meet with minority groups and “report back with a plan to accelerate aid to those in greatest need.” The vice president’s office vowed that Pence “will not tolerate bureaucratic delays.”

“It’s changing,” Smith told Al-Monitor. “Mark Green led a delegation to many parts, including Erbil, and came back … further informed to what the needs were. And they are systematically setting out to meet those needs.”

The House unanimously passed Smith legislation authorizing the Trump administration to provide aid directly to IS genocide victims in June. And while the Senate Foreign Relations Committee advanced the bill in the upper chamber earlier this month, Sen. Patrick Leahy, D-Vt., has held up the bill on the floor.

Leahy spokesman David Carle told Al-Monitor that the senator has “made several proposed edits to the bill, which he believes would improve it. We saw the bill for the first time this week and they are asking for it to be approved by unanimous consent without changes or debate.”

Smith’s bill notwithstanding, the State Department says it has directed more than $118 million in aid for Iraqi minorities since last year.

Earlier this year, the United States withheld $75 million of its contribution to the UN Development Program, which oversees Iraqi stabilization aid, until the agency deploys $55 million of its current US contribution to Iraqi minorities. And in July, Green announced that the United States would fund longer-term reconstruction projects for 10 Christian communities in the Ninevah Plains.

Nonetheless, Washington refused to commit funds for Iraq’s reconstruction as the Trump administration attempts to slash aid across the board. At a February pledging conference in Kuwait, the United States said that it will instead rely on private sector investment in Iraq through the Overseas Private Investment Corporation and the Export-Import Bank. Baghdad estimates that it will need roughly $100 billion to rebuild the country following the chaos and damage that ensued in the fight against IS.

by Murielle KASPRZAK and Joseph SCHMID | AFP | May 26, 2022
END_OF_DOCUMENT_TOKEN_TO_BE_REPLACED