Congress clashes with Trump administration over aid for Iraqi Christians

The Senate is under pressure to quickly pass a House bill encouraging the State Department to bypass the United Nations in doling out humanitarian assistance. 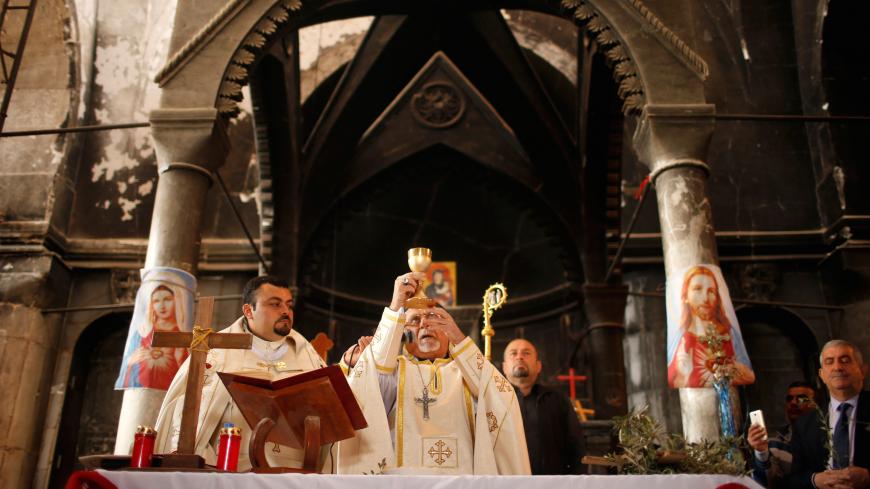 Disappointed with United Nations efforts to provide humanitarian aid to Iraqi minorities, Congress is calling on the Trump administration to bypass the world body and provide assistance directly to Christians and other genocide victims.

Even as the Islamic State (IS) loses its last grasp on Iraq, the group’s Yazidi and Christian victims are clamoring for a boost in US support so they can rebuild their lives. They complain that ethnic minorities are having trouble accessing the $1.3 billion that the United States allocated for humanitarian aid to Iraq in 2017, and have turned to Congress for help.

Testifying at a House Foreign Affairs Committee hearing last week, a former Yazidi sex slave who goes by the pseudonym Shireen warned that IS’ genocidal campaign will succeed without international help. The hearing aimed to hasten congressional action on the Iraq and Syria Genocide Emergency Relief and Accountability Act, which would authorize the State Department and the US Agency for International Development (USAID) to fund faith-based entities providing humanitarian assistance to Iraqi and Syrian genocide and war crime victims rather than funnel the money through UN agencies.

“Without serious action from you and the world governments, many of these people will continue to flee their ancient homelands of Syria and Iraq,” Shireen said.

Although the House passed the bill in June, its sponsor, Rep. Chris Smith, R-N.J., convened the hearing to urge the Senate to act. Senate leaders declined to say whether they intend to bring up the bill.

"We hope that [the Senate] will consider our existential plight and that time is short for us and make it law soon," said Stephen Rasche, the legal counsel for the Chaldean Catholic Archdiocese of Erbil, which has supported many of the Christian refugees who have not entered UN camps.

The Senate Foreign Relations Committee marked up Smith’s bill in September, but largely merged it with the Syrian War Crimes Accountability Act, which would form a congressional study group on war crimes and human rights violations resulting from the war in Syria. As a result, the House would have to vote on the bill again for it to become law.

"There’s no ill-will here, there’s no bad faith,” Sen. Marco Rubio, R-Fla., said at a Senate Foreign Relations Committee hearing examining the issue. “The UN would say, ‘The money’s here, it’s available,’ but [Iraqi minorities] don’t come … It doesn’t seem like the UN officials … go any further than that and ask why are people not utilizing it and why are they not coming for it.”

Smith and others in Congress have harshly criticized the State Department and USAID for continuing to provide most of the aid via the UN despite a provision in 2017 spending legislation directing them to ensure greater aid accessibility for genocide victims.

“Career staff at the State Department and USAID have ignored the law and thwarted the will of the president, Congress and the people we represent,” Smith said at the hearing. “These bureaucrats have refused to direct assistance to religious and ethnic minority communities, even to enable them to survive genocide.”

The 2017 act directed that funds “be made available for humanitarian assistance for vulnerable and persecuted religious minorities, including victims of genocide designated by the secretary of state.” The State Department determined that IS committed genocide against Yazidis, Christians and other religious minorities last year.

The spending bill also directs the State Department and USAID to implement an “immediate, coordinated, and sustained response” for these groups while “[improving] access to secure locations for obtaining humanitarian and resettlement services.”

An estimated 800,000 to 1.4 million Christians lived in Iraq in 2002, but their numbers have plummeted to fewer than 250,000 as of 2016. And advocates say few Christians have returned to their homeland in the ethnically and religiously diverse Ninevah Plains since its liberation from IS earlier this year.

USAID, however, insists it is adequately providing assistance to displaced minorities.

“The United States has provided $115 million to the successful [United Nations Development Program (UNDP)] Funding Facility for Stabilization,” a USAID official told Al-Monitor. “This has resulted in 2.2 million Iraqis returning to their homes. A sizeable portion of this assistance is for minority communities.”

“The UN with USAID comes up with a list of projects that it claims it’s doing in these … minority areas,” Shea told Al-Monitor. “We’ve gotten feedback from local minorities that actually nothing is happening or that what is happening is superficial. It’s cosmetic. It’s not the major projects that are needed like power and water for these towns.”

However, Lise Grande, the deputy special representative of the UN Assistance Mission for Iraq, said the UN works with both the Iraqi government and local religious leaders in the Ninevah Plains to provide crucial infrastructure to Christian communities such as an electric grid and roads.

And while Smith’s bill could potentially prompt USAID to donate money to Christian humanitarian relief organizations, Grande noted that the UN already works with such organizations. In particular, she pointed to the fact that the World Health Organization funded the Christian aid organization Samaritan’s Purse to provide a field hospital for the Christian town of Bartella.