Is Congress paving the way for a Christian safe zone in Iraq?

A bipartisan effort to denounce an ongoing genocide is picking up steam. That's just the first step. 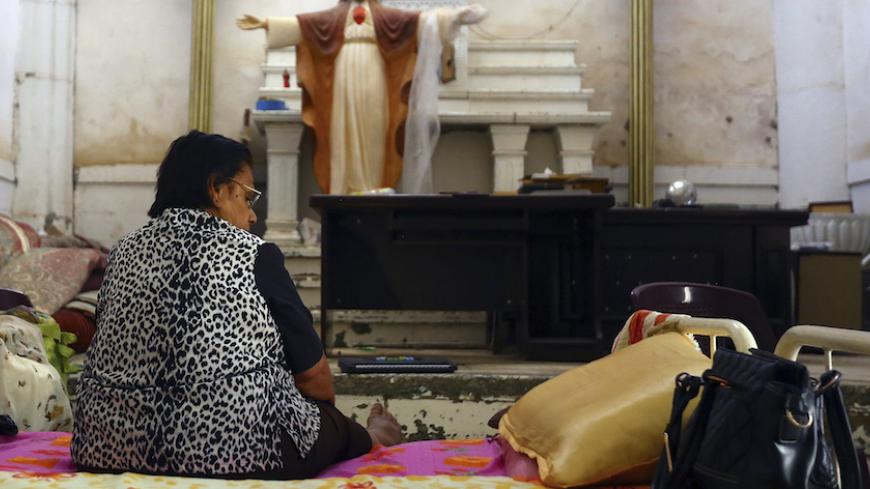 An Iraqi Christian woman fleeing the violence in the Iraqi city of Mosul, sits inside the Sacred Heart of Jesus Chaldean Church in the province of Ninevah, July 20, 2014. - REUTERS/Stringer

Can the US Congress help save Middle East Christians from extinction?

Christian activists are making the unlikely gamble as their yearslong exodus from Syria and Iraq has turned into an outright stampede under the Islamic State (IS). They’re launching a lobbying blitz to get the United States to label their plight a genocide — and create pressure for the subsequent creation of a Christian safe haven in Iraq.

“We are forming a lobby team and trying to raise some money to hire [a] very respected diplomat so we can get more countries involved in this issue,” said Loay Mikhael, head of the Foreign Relations Committee at the Chaldean Syriac Assyrian Popular Council.

“What we are trying to do right here, right now, is we’re trying to push this genocide resolution to be passed by the House or Senate,” he told Al-Monitor. “If that passes, then we can go and speak to people and tell them, OK, the Christians and other minorities face genocide and it’s recognized by the Congress. That means they face atrocities and crimes against humanity, so it’s time to do something for them.”

“The first goal is to elevate international consciousness of the problem,” Rep. Jeff Fortenberry, R-Neb., told Al-Monitor. “You then create the gateway for a fuller discussion about security concerns, economic and political integration. One of the ideas out there is safety zones guaranteeing security of religious minorities in certain areas."

The resolution, introduced exactly two months ago, had garnered 146 cosponsors as of Nov. 9. It had the support of former House Speaker John Boehner, R-Ohio, and has been co-sponsored by Rep. Ed Royce, R-Calif., whose House Foreign Affairs panel is now reviewing the resolution.

The resolution does not spell out a plan for helping the Christians and other minorities, but calls on other countries and the United Nations to follow the US lead and call their slaughter a genocide. It says the world should “collaborate on measures to prevent further war crimes” and prosecute the perpetrators of violence, particularly the forced displacement from the Ninevah Plain, “a historic heartland of Christianity.”

For Mikhael, that means helping the Christians expel IS from the 80 percent of the Ninevah Plain it still occupies.

“If they decided they want to save that area, then OK, train our people, train the Kurds, give them more equipment — or liberate Ninevah Plain for us, and we will protect it,” he said. “Without a safe haven — without international protection for the Ninevah Plain — there will be no Christians living in Iraq anymore.”

The latest effort comes as the number of Christians in Iraq has dwindled from 1.5 million before the US invasion to fewer than 500,000 today. The UN human-rights panel concluded in March that IS actions against Christians and other minorities “may constitute genocide” and Pope Francis used the g-word during his July 10 trip to Bolivia.

"Today we are dismayed to see how in the Middle East and elsewhere in the world many of our brothers and sisters are persecuted, tortured and killed for their faith in Jesus," Francis said. "In this third world war, waged piecemeal, which we are now experiencing, a form of genocide is taking place, and it must end."

The campaign for a safe zone for Syrian and Iraqi Christians is being spearheaded by several rights groups, including A Demand for Action and In Defense of Christians working with coalitions of Christian churches in the Middle East. The proposal for the creation of an autonomous province in the ancient Christian Assyrian homeland in the Ninevah Plain dates back at least five years, but has gained new traction as various Christian denominations have come together in the face of the IS threat.

“We do hope to see some kind of means by which these communities would have international protection in the region — most likely in Iraq,” said Kristina Olney, head of government relations for IDC. “We are in the process of consulting with our contacts in the region, in Iraq in particular, to come up with a concrete proposal.”

At its first summit last year in Washington, IDC brought together all the Eastern rite patriarchs — in the flesh or represented by their bishops — for the first time since the Council of Florence in the 15th century. Bringing Iraqi leaders together on the ground is proving just as challenging.

In a blow to advocates of an autonomous Christian zone, the leader of the Assyrian Democratic Movement in Iraq denounced the idea in an interview last week with Al-Monitor. Yonadam Kanna, who is also a member of the Iraqi parliament, said the Council of Ministers’ decision in January 2014 to split the existing Ninevah province in two — since put on hold by the IS onslaught — was not a precursor to autonomy for the Ninevah Plain area.

“Those who made such demands are people outside of Iraq, while we — who work hard in parliament — espouse the principles prescribed in Iraq’s constitution and proclaim the importance of living as part of a single homeland that unites Iraqis of all ilk,” Kanna told Al-Monitor. “We further think that calls for the establishment of an autonomous region are racist in nature and serve to isolate us from one another.”

And the governor of Kirkuk, Najmaldin Karim, warned just days later that such a zone could create a “big target” on the backs of Christians.

“I’m telling you, the Christian community is leaving,” Karim told Al-Monitor. “Creating a safe haven — what are you going to create? Those areas are all mixed.”

“When we say we want a province or an autonomous region for the Christians in Ninevah Plain, that means we will have our own parliament, a percentage from the Iraqi budget, Christian police forces that can control the area and secure the area,” he said. “We don’t want to be isolated from the other people. We don’t want an independent country.”

Part of the problem, said resolution co-sponsor Anna Eshoo, D-Calif., is that the Ninevah Plain itself is disputed. While Christians rely on the Kurds to fight IS and take care of their displaced people in neighboring Iraqi Kurdistan, the Kurds themselves may be unwilling to give up their claims — further complicating any plans for a safe haven.

“Yes, this is the goal of some people — I understand it very well. But it’s a very complicated undertaking,” said Eshoo, the only member of Congress of Assyrian descent. “This is not our land. We have to deal with a sovereign government, as stretched and as limited and as troubled as it is. It’s like if someone came to our country and said, you make a 51st state.”

Those concerns may help explain the US government’s apparent reluctance to get involved in the issue.

Congress has passed several laws since 2008 have called on the State Department to assist religious and ethnic minority groups in Iraq, but a 2012 Government Accountability Office report found they were sometimes ignored. Last year’s defense bill also urged the Department of Defense to include local security forces protecting Ninevah Plain minorities when allocating assistance under the $1.6 billion Iraq Train and Equip Fund.

Lawmakers vowed to double down.

“We have to do something,” said Fortenberry. “People are dying. Christianity in the Middle East is shattered.”