While Congress seeks to ensure that President Donald Trump resumes Syria stabilization aid, they also want to keep it out of the hands of Bashar al-Assad. 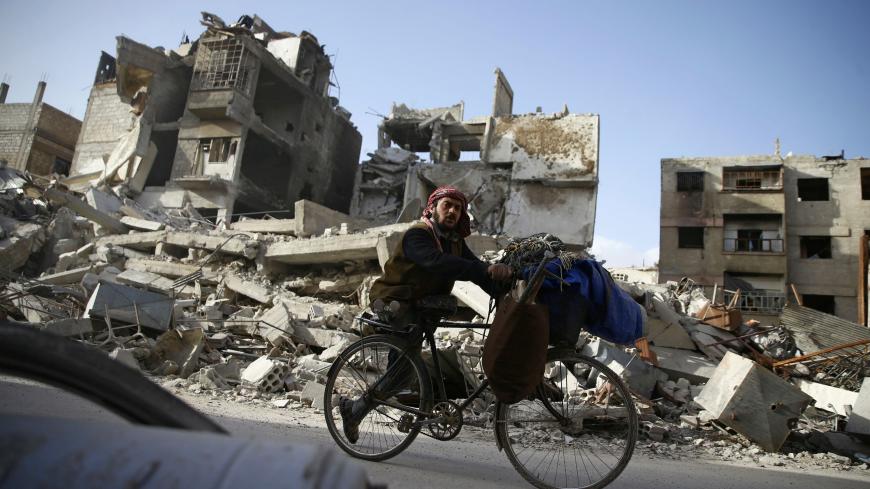 A handicapped man rides a bicycle past damaged buildings in the besieged town of Douma in eastern Ghouta in Damascus, Syria, March 1, 2018. - REUTERS/Bassam Khabieh

President Donald Trump’s Syria policy is coming under heightened scrutiny from Congress following his decision to freeze $200 million in stabilization aid to Syria.

The purse-string holders in the Senate today cleared an annual foreign aid spending bill that allocates $150 million in Syrian stabilization assistance in an apparent rebuke of Trump’s aid freeze. While Congress has authorized funding to help Syrian civilians rebuild their country since 2013, this is the first time congressional appropriators have mandated stabilization funding levels in the bill.

House lawmakers have also voiced concern about the Syria aid freeze but without mandating funding levels. The lower chamber, however, agrees with the White House that the current regime should not benefit from US funding streams. To that end, the House version of the spending bill, released last week, includes new language stipulating that non-humanitarian assistance “should not be used in areas of Syria controlled by a government led by Bashar al-Assad or associated forces.”

“The directive reflects USAID [US Agency for International Development] policy already in place regarding civilian assistance for Syria, which is to not provide such assistance in areas controlled by the regime,” a staffer on the House Appropriations Committee told Al-Monitor.

While prior spending bills have stipulated that funding is partly intended to “further the legitimacy and viability of the Syrian opposition,” this is the first time House appropriators have explicitly placed limits on non-lethal aid inside Assad-held territory. Previous spending bills have contained provisions on using the money for projects that support “or otherwise legitimize the government of Iran.”

Although there’s overwhelming consensus within Congress and the administration on restricting non-humanitarian aid to the Assad regime as leverage, some analysts question its efficacy.

“The US government's refusal to allow any funds to be spent on Syrian reconstruction in government-held areas not only ties the hands of US officials who may seek to leverage concessions from the Syrian government, but it is also more likely to hurt the Syrian people than the Syrian regime,” Joshua Landis, the director of the Center for Middle East Studies at the University of Oklahoma, told Al-Monitor. “These additional financial restrictions will do little to loosen regime control over the people and will likely serve to delay the restoration of education and health institutions the people depend on.”

The United States estimates that Syria’s reconstruction will cost between $200 billion and $350 billion. China, meanwhile, has agreed to invest $2 billion in Syria’s industrial parks, while Russia has agreed to deploy a private security firm to protect an Assad regime oil facility in exchange for 25% of the production revenue.

House appropriators added the spending bill restriction even though the full chamber in April unanimously agreed to pass the No Assistance for Assad Act, which still awaits a final vote in the Senate. Lawmakers introduced the bill to limit US stabilization and reconstruction assistance in Assad-held areas out of concern that the World Bank and International Monetary Fund would work with the regime in their efforts to rebuild the war-torn country.

The House spending bill contains more limited exemptions than the No Assistance for Assad Act. In addition to the humanitarian exceptions, that bill also contains an exemption for certain “local organizations” in Assad regime territory and for funding to help facilitate the removal of chemical weapons from the country.