The Palestinian village with only three residents

While all of the inhabitants of the town of Shoshahla left under Israeli threats, three people have returned and continue to cling to their land and refuse to leave a second time. 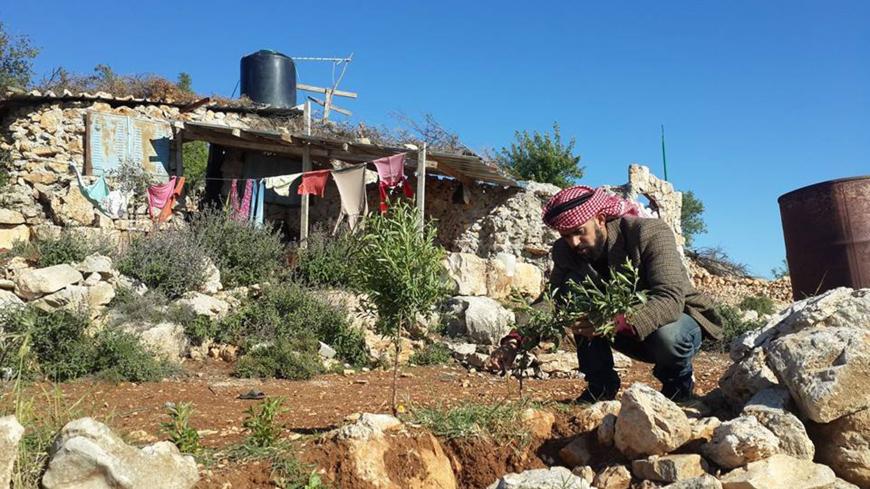 BETHLEHEM, West Bank — To the southwest of the town of al-Khader, 5 kilometers (3 miles) from the city of Bethlehem, lies Shoshahla village located at the foot of a mountain surrounded by five Israeli settlements: Sidi Bouaz, Eliezer, Efrat, Neve Daniel and Kfar Etzion. Only three people — a man, his wife and their daughter — live in Shoshahla and continue to cling to a land they inherited from their ancestors. This small family, which was forced to migrate decades ago under Israeli threats, chose to return to Shoshahla in the early 1990s and is refusing to leave again despite the primitive life they lead.

The village of Shoshahla faces continuous attacks from settlers who destroy homes, write racist slogans on walls, deprive inhabitants of the basic necessities of life and force them to use primitive means when traveling to neighboring cities and villages. Settlers are seeking to maintain a tight grip on the only remaining family and prompt them to leave their home and land. Several attacks have been launched on the village, the most recent of which was when an Israeli military force stormed the village on July 29, 2017, forcing residents to leave their homes at gunpoint.

Muhannad Salah, 37, is the only Palestinian left with his family in the village. He told Al-Monitor, “The village of Shoshahla was built in 1878 during the Ottoman rule over Palestine. It stretches over an area of ​​1,200 acres. Up until 1976, 30 Palestinian families lived in the village but they migrated to the nearby al-Khader village as a result of the Israeli wars that were raging at the time. These families feared that the residents of neighboring settlements would attack and kill them. Only 50 meters [164 feet] separate the village from the closest settlement.”

Salah said, “In 1992, I went back to the village after I had left a couple of years before, and I repaired my family's house despite the lack of water and electricity. My family and I live a very primitive life in a house made of rock and clay, and we use an old kerosene lamp for lighting. We get water from an old well that I repaired. I use wood for cooking and heating during the winter. I also rely on breeding sheep and birds, and I sell various agricultural crops to the Bethlehem market so I can cover a small part of my family’s needs."

He noted, “The village is home to an ancient Islamic cemetery and an old and damaged historic mosque named after the village. I am currently trying to revive the village by inviting its original inhabitants who live in the nearby town of al-Khader to return and reclaim the land they abandoned years ago and block any Israeli attempts to steal the village lands."

“I am the only Palestinian who still has the name of the village Shoshahla on his ID card. My family and I have been harassed and assaulted by the settlers. I was repeatedly arrested by the Israeli army and forced to leave the village. When a group of settlers from the settlement of Kfar Etzion burned my house in 2016, I went to file a complaint with the Israeli authorities. I was arrested and only released when I paid a fine. But I will preserve this land that I inherited from my ancestors and will defy the Israelis,” Salah added. 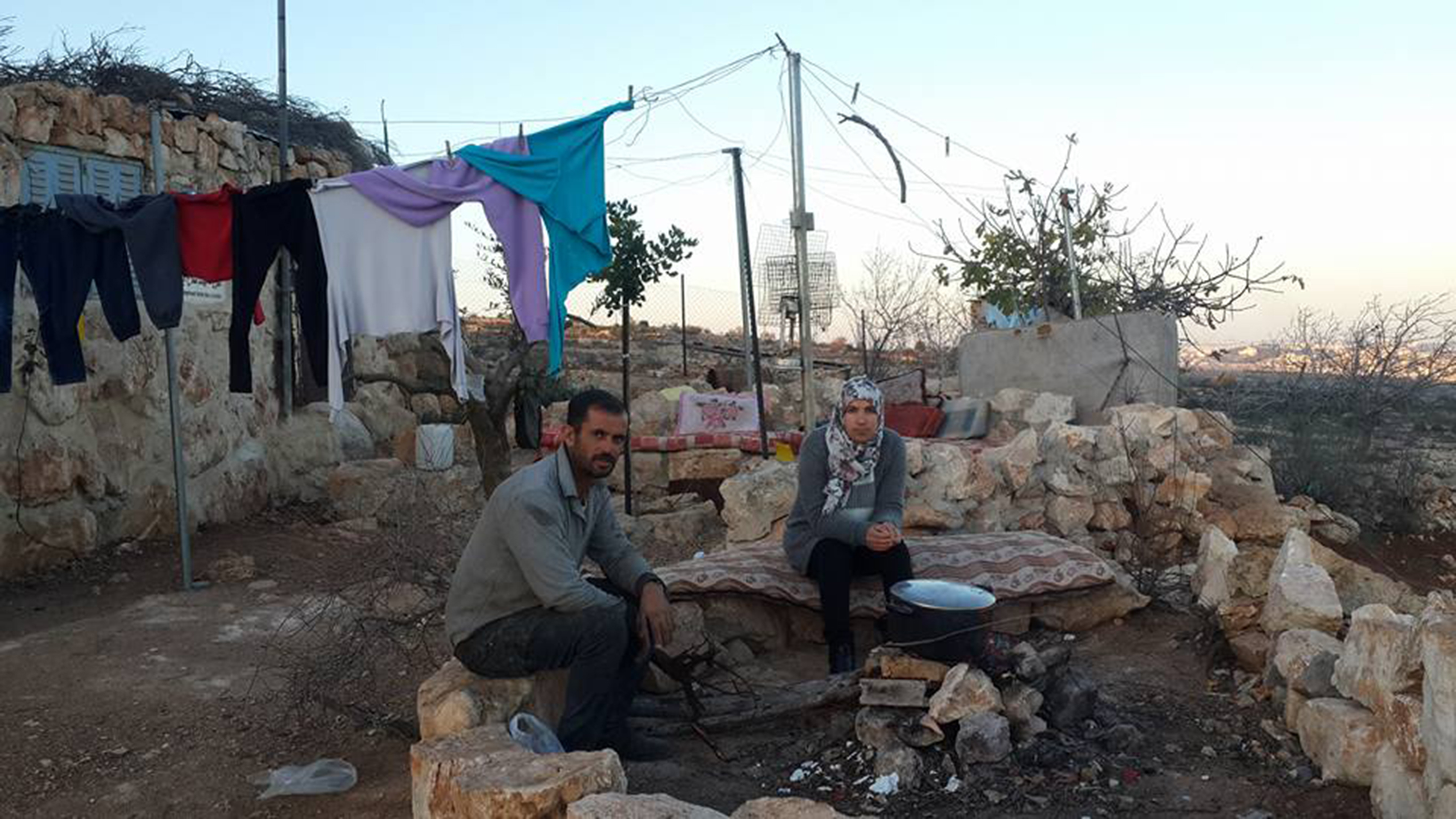 “While settlements surround the village from all directions and shelter more than 120,000 settlers, my family and I still lead a normal life despite the Israeli harassment. My wife and only daughter help me persevere despite the lack of the most basic amenities,” he said.

The village of Shoshahla is located in Area C, which is under Israeli control and which accounts for 60% of the West Bank. Israel has maintained almost complete control over the area following the signing in 1995 of the Interim Agreement, known as “Oslo II,” between Israel and the PLO. The agreement divides the West Bank into three areas: Area A, Area B and Area C.

Hasan Bureijeh, the representative of the Colonization and Wall Resistance Commission (CWRC) in Bethlehem, told Al-Monitor, “Shoshahla is an ancient and historical village where signs of Ottoman seals can be found on the walls of houses. Its lands are the property of Palestinian citizens.”

He said, “The CWRC supports Salah’s family resistance in the face of the Israeli Judaization plan.”

Bureijeh added, “The CWRC has reclaimed several agricultural lands in the village and restored more than four houses to lure families back, but Israel is forbidding Palestinians from returning. A structural plan has been prepared with the help of government agencies to provide the village with electricity using solar cells in the coming period. Such a plan aims to breathe new life into the village and help preserve the Palestinian cultural and historical heritage."

“We mobilize Palestinian and foreign delegations from around the world and invite them to visit the confiscated or threatened Palestinian lands by planting dozens of olive trees in these areas to defend the right of the Palestinians to their land and have them witness the Israeli violations on the ground. These delegations are also invited so that they convey the ongoing Israeli violations to their people,” Bureijeh noted.

Iman al-Titi, the director of the archaeology department at the Palestinian Ministry of Tourism and Antiquities in Bethlehem, told Al-Monitor, “Shoshahla is an important historical and archaeological landmark. The village is home to ancient grape presses, water wells and heritage palaces such as the Hanbal Palace. We are working on an integrated plan to restore the village and protect its cultural and heritage sites. The village is part of our Palestinian identity.”

Titi said, “The next stage will witness the launch of a tourist route to the village of Shoshahla in order for people to get acquainted with its archaeological and heritage landmarks. Despite the obstacles that this route may face for being located in the Israeli-controlled Area C, it will include Masar Ibrahim al-Khalil, which is a long-distance cultural walking route stretching from the north of Jenin to the south of Hebron.”

According to B'Tselem - The Israeli Information Center for Human Rights in the Occupied Territories, the number of Israeli settlements amounted to more than 200 between 1967 and the end of 2016 and were inhabited by around 600,000 Israeli settlers.