The mass arrests in Turkey after the failed coup in July 2016 have prompted many Turks to flee their country for Europe. 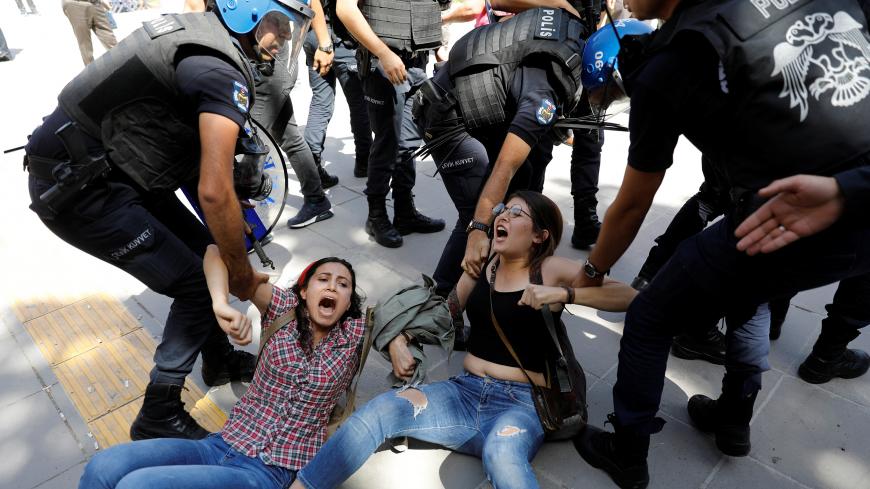 Riot police detain protesters during the trial of two Turkish teachers who went on a hunger strike over their dismissal under a government decree following the July 2016 failed coup, outside of a courthouse, Ankara, Turkey, Sept. 14, 2017. - REUTERS/Umit Bektas

This past November, three bodies were found washed ashore the Greek island of Lesbos. They were later identified as a Turkish husband and wife, Huseyin and Nur Maden, and one of their three children. The Madens were teachers in Turkey, but they were among the 150,000 civil servants dismissed from their jobs after the failed coup in July 2016. Some of those dismissed tried to flee to Greece to avoid arrest or find work. More than 12,000 Turks applied for asylum in Europe for the first time in 2017, according to Eurostat. This figure is triple what it was the year preceding the failed coup and is the highest it has been in the past decade.

Since July 2016, Turkish authorities have arrested over 50,000 people, including journalists and intellectuals. Around 150,000 Turks have both had their passports revoked and lost their jobs as police officers, soldiers, teachers and public servants. For some, the solution was to leave Turkey and find work in another country, where they could have a better life and avoid prosecution.

With their passports revoked by the Turkish government, Turks prefer to go to Greece as opposed to other European countries since they can arrange transport by boat via smugglers. The journey from the Turkish coast to certain Greek islands can be short, distance-wise.

"Turkish refugees [in Athens] are the most educated and intellectual segment of Turkish society," said Murat, who fled Turkey for Greece after July 2016. "We can learn a new language or adapt to the culture in Europe really fast."

"We tried to start over, but we were already marginalized in the community as ‘putschists,’" said Murat. "Our children were not accepted to schools, and finally, when 50 police arrived at our parent's village to detain my wife, by chance we were not there. I sold my car within a week and with that money, we came to Greece."

The Gulenists are not the only ones who have had to leave Turkey following the coup attempt. There are others, like Merve, 21, and her uncle Hasan. Merve was only 19 when she was arrested after the coup attempt and put in jail for a year. "I was studying philosophy in Tunceli and was part of a left-wing student organization at my university," she said. "Now there are only two possibilities left for us Kurds in Turkey. If you don’t want to be jailed, you should either join the PKK [Kurdistan Workers Party] fighters or flee into exile."

Hasan was a member of the Peoples’ Democratic Party in the district of Sur in Turkey's mainly Kurdish southeastern province of Diyarbakir, which has witnessed violent clashes between Turkish security forces and the PKK-affiliated Civil Protection Units. The Turkish army imposed a curfew in Sur and destroyed more than 80% of the houses. “I saw my friends and colleagues dying," he said. "I lost my home, job, village and everything I had. I could either die or try for a new life." Hasan and Merve took the same boat to Greece. He laughed as he mentioned that it was the first time they had traveled outside of Turkey.

Life as a refugee is harsh. The Greek police detained Murat and his family upon their arrival. They stayed in police custody for a week until moving to a refugee camp. Once the refugees are caught without documents by Greek police, they have to register with local asylum services to receive a temporary ID card. Meanwhile, the refugees can decide if they want to apply for asylum in Greece or not.

“There is no job or future in Greece, even for Greeks," said Hasan. "Why would we stay in Greece?” Hasan dreams of going to Germany.

Murat said he has tried six times to travel to another European country with a fake ID, but each time has ended in failure. He applied for an asylum hearing, which will take place in March 2020.

Turkish refugees in Greece have organized their own communities and living situations. Zeynep and her uncle live in the town of Lavrion with 400 other Kurdish refugees in a self-organized refugee camp. They receive no help from the Greek authorities, though they receive food from volunteers. Gulenists live together in rented apartments and often arrange meetings among fellow Gulenists. They keep in touch with Turkish refugees in other European countries to share information and stand in solidarity.

Just before Turkish President Recep Tayyip Erdogan’s visit to Greece in December 2017, nine Turkish citizens were arrested there over their alleged links to the Turkish militant organization, DHKP-C, or the Revolutionary People's Liberation Party-Front. That same month, Greece's independent asylum authority granted asylum to Suleyman Ozkaynakci, one of the eight Turkish soldiers who fled to Greece after the coup attempt. A week after he was granted asylum, Ozkaynakci was detained and his asylum suspended by the Greek authorities. That same week, the Greek Reporter noted the rise in Turkish refugees to Greece. It appears, then, that the situation of Turkish refugees depends on the state of relations between Greece and Turkey.

*All refugees' names were changed upon requests of the refugees.

*Christoph Kurbel contributed to this report.