Many supporters of the outlawed Gulen movement have tried to enter Greece since the crackdown against them in Turkey following the 2016 coup. 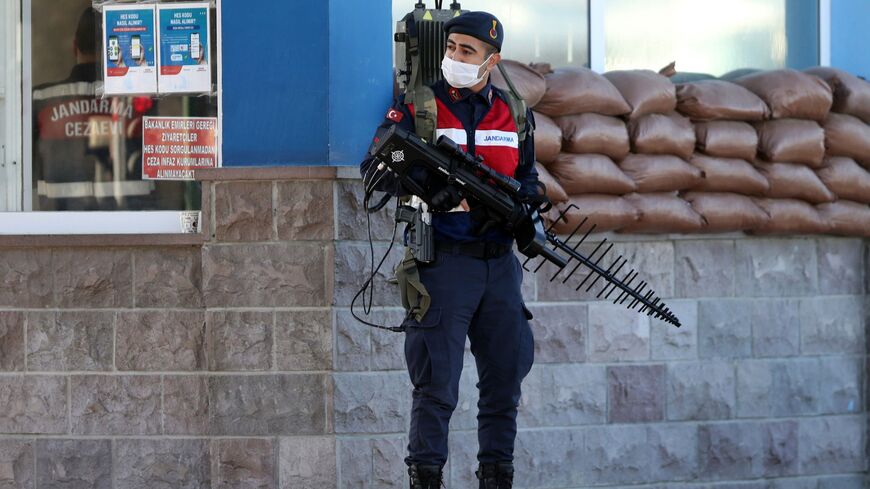 A Turkish soldier patrols next to the entrance of the Sincan Penal Institution at the 4th Heavy Penal Court near Ankara, on Nov. 26, 2020. A Turkish court sentenced hundreds of military and civilian personnel at an air base to life prison sentences later that day, proclaiming them guilty of involvement in the 2016 failed coup attempt against President Recep Tayyip Erdogan’s government. Fethullah Gulen, a US-based Muslim preacher who was once an ally of Erdogan, is accused of ordering the failed putsch. - AFP via Getty Images

Turkish authorities arrested a group of people for allegedly seeking to enter Greece illegally Thursday, and accused some of them of belonging to the outlawed Gulen movement.

Turkish border police arrested five people in Meric near the Greek border. The police said four of them belonged to the Gulen movement, according to a tweet from the Turkish Defense Ministry.

Fethullah Gulen is a US-based, Turkish Islamic scholar who leads the eponymous movement. He has considerable support in Turkey. President Recep Tayyip Erdogan blamed Gulen’s supporters for the 2016 coup attempt, and has been cracking down heavily on the group ever since. In April, police arrested hundreds of military personnel for alleged Gulenist ties.

Gulen supporters and other Turkish citizens who have been persecuted since the coup have tried to flee to neighboring Greece before, and there was an increase in illegal journeys to the European country post-2016. The phenomenon is continuing. Turkish police also arrested an alleged Gulen supporter for trying to flee to Greece on Monday.

Turkish authorities pursue alleged Gulen supporters around the world. In January, Ukaine deported a group of suspected Gulenists to Turkey. In June, Turkey was accused of kidnapping a Gulen-affiliated teacher in Kyrgyzstan.

Greece and Turkey have long had a difficult relationship. On Tuesday, Turkish Foreign Ministry spokesman Tanju Bilgic said, “Greece itself is a safe haven for terrorist organizations with a disgraceful track record,” in a reference to Gulenists going there. The two states notably also disagree on Turkey’s offshore drilling ambitions in parts of the eastern Mediterranean claimed by Greece and Cyprus. Turkey has also worked to repair its relations with Greece this year.