As many Turks openly say the president's party has lost its mojo, it really means Muslim Brotherhood networks are collapsing there; the reasons also help explain the rise and potential fall of the cult of Erdogan. 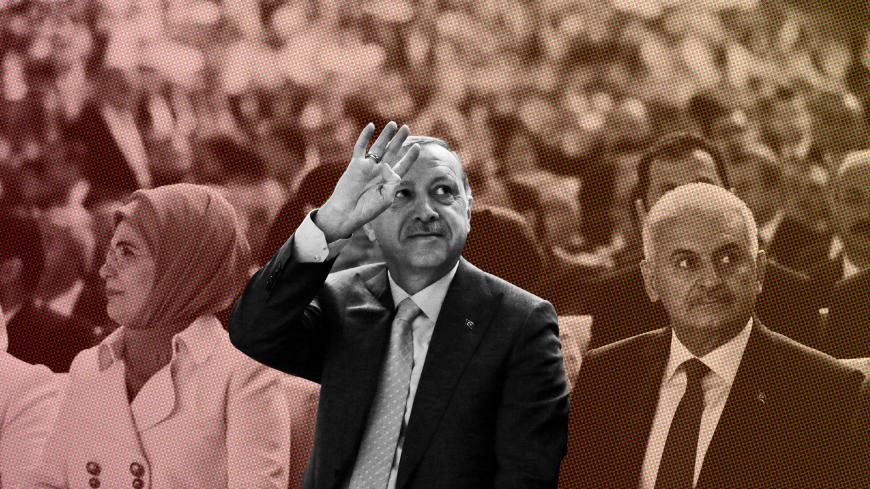 Turkish President Recep Tayyip Erdogan, accompanied by his wife, Emine, and Prime Minister Binali Yildirim wave to supporters during the congress of the ruling Justice and Development Party in Ankara, Turkey, May 21, 2017. - REUTERS/Burhan Ozbilici

A line heard frequently in Turkey is, “The Justice and Development Party [AKP] has no saga left to tell.”

The word “saga” can be explained as promises that capture and excite constituents. This rhetoric has been heard more often since August, when several AKP mayors were pressured to resign. That action came after Turkish President Recep Tayyip Erdogan in May 2017 had candidly observed the diminishing enthusiasm in his party's ranks, which he compared with “metal fatigue.” Al-Monitor observed how Erdoganmania evolved into Erdogan fatigue by July, and since then most pundits have been using "the end of the AKP’s saga" as a careful way of explaining the dissolving political structure.

Since July, the discomfort has grown far beyond fatigue, despite a well-institutionalized censorship on media. The AKP has not just run out of ideas to excite the masses, but also is experiencing erosion of its ideological core — namely the Islamist movement Muslim Brotherhood. Erdogan, seen as the AKP's crux, remains unchallenged, but he and his slogans have lost their impact. Crowds in every city Erdogan visits seem to cheer for him and applaud at the end of his remarks, but there are signs of discontent.

For example, on Dec. 15, while speaking in Istanbul, Erdogan asked the crowd, “Who does the Islamic world look up to?" Failing to get an answer, he said, “You are quiet; where do they look? Of course they are looking at Turkey.”

On Dec. 24, speaking in the predominantly Kurdish southeastern town of Sirnak, Erdogan got angry with his audience for cheering at the wrong moment. He recalled how Sirnak had only generated a yes vote of 28% for the April constitutional referendum that expanded the presidency's powers. The misplaced response — by an apparently disinterested audience cheering out of habit rather than enthusiasm — visibly bothered the president, but the crowd just kept clapping and cheering. Erdogan stopped and said, “Why did you clap? I think it is a misunderstanding.”

There are several indications that slowly even the crowds that gather to cheer Erdogan are failing him, because the novel ideas and solidarity promise of the Muslim Brotherhood no longer work in Turkey.

There are six main patterns for explaining how the Brotherhood is now on life support in Turkey.

First is the alienation of the Kurds in Turkey. One of the AKP’s biggest promises was to embrace every Muslim and end the bloodshed of war in southeastern Turkey with the Kurdistan Workers Party in particular. Until the pro-Kurdish Peoples’ Democratic Party was able to enter the Turkish parliament, the AKP took pride in representing the Kurds. Yet the peace process collapsed and the AKP showed little to no effort to restart it. Instead, Erdogan opted to form an alliance with the ultranationalist Nationalist Action Party, also known as the Grey Wolves, which resulted in further destruction of Kurdish cities.

In the meantime, the AKP should be given credit for opening up social and cultural public spaces to different Islamist groups. Over the years, to advocate for Islam and strengthen its core — while battling extreme secularist rules and regulations — the AKP encouraged various religious orders. For decades, most of the attention has focused on the effort to allow women to wear headscarves in public. But the July 15, 2016, coup attempt showed that different Islamist movements — in this case specifically, the Gulen movement — had penetrated state institutions extensively. The AKP’s tireless efforts to rid government agencies of the Gulen movement (which Turkey now refers to as a terrorist organization) shows us these Islamists have actually been in charge of several state agencies for decades. Now there are signs that the movement is being replaced by other Islamist groups.

Erdogan plays Islamist groups against each other. For example, on Jan. 20, the Official Gazette announced that 256 tax-exempt waqfs (religious and charitable foundations), including the Ismailaga religious order and Ensar Waqf, have been given a place in official protocol for national celebrations. Several other religious endowments have been established during the AKP's rule, most of which advocate more conservative versions of Islam than the Muslim Brotherhood. In sum, the second reason for the Brotherhood's weakening in Turkey is simply diversification of Islamist groups and their leadership, although none challenge Erdogan or openly demand to replace most Brotherhood networks. Alternative mosques and groups operating under the waqfs are competing for and complementing the services of Turkey’s top religious agency, the Diyanet (Directorate of Religious Affairs).

The third reason for the Muslim Brotherhood's weakened state is the failure of Erdogan's dream: to raise a pious generation. Hundreds of religious schools (imam-hatip schools) have been established all around the country, but the quality of education they provide has been below satisfactory and enrollment rates have fallen to 30%. The government has not been able to provide an alternative for these schools.

The fourth reason is the party's failure to fulfill economic promises. Despite impressive national growth rates and grandiose landmark projects, the Turkish economy is struggling: Inflation and unemployment levels are in double digits, the Turkish lira is losing against the euro and the US dollar, and farmlands are disappearing due largely to droughts. Recently, there have been a few instances in which Erdogan’s rallies have been disturbed by workers demanding permanent jobs. One unemployed construction worker attempted to self-immolate in front of the parliament building Jan. 12. He told the media he was an AKP member who desperately needed a job.

The fifth explanation is the AKP’s inability to restructure itself and control expanding nepotism. Despite Erdogan’s struggle to renew party cadres and rejuvenate the political arena, the number of people who acquire government and private-sector positions because of their family connections continues to rise. Internally, it seems there are bitter feuds and childish competitions among senior AKP members.

Last but not least is the domino effect — that is, Turkish Brotherhood networks have been weakened by regional defeats of the movement. Egypt, Tunisia, Syria, Qatar and Hamas have all had their own challenges since the Arab Spring uprisings in 2011. The AKP government has really tried to host dissidents and help struggling Brotherhood leaders on multiple fronts, but it hasn't worked. Particularly, the imprisonment of Egypt's former president, Mohammed Morsi, and the failure of the Brotherhood in Syria crippled the Turkish Brotherhood’s rhetoric and resistance.

In Turkey, contrary to the fearmongering of conspiracy theory-loving columnists, the Muslim Brotherhood wasn't ousted by imperial powers or militant secular groups. Its gradual corrosion is an internal issue. The Brotherhood network was based on civil society’s collaboration and cooperation to fill the vacuums created in areas the states neglected such as health care, education and other basic needs of communities. The original idea was to lead by example and help everyone. Yet in Turkey, after acquiring the state powers and resources, these unofficial networks have gradually stopped expanding and become only effective tools to rally groups around the political party and the ballot box.

As the AKP gradually evolved into a much-dreaded one-man rule, the Turkish Muslim Brotherhood lost its solidarity. This, however, should neither be read as the end of Islamism in Turkey nor as the loss of Erdogan’s stronghold on the country. It rather means the Muslim Brotherhood is no longer the locomotive engine for AKP’s election victories. Therefore, Erdogan will need more rally-around-the-flag climax moments — be they "God-given," such as the July 2016 coup attempt, or the military-led operation on Afrin, Syria.