With yet another emergency status decree, Turkey's president makes himself top gun of the country's entire defense industry. 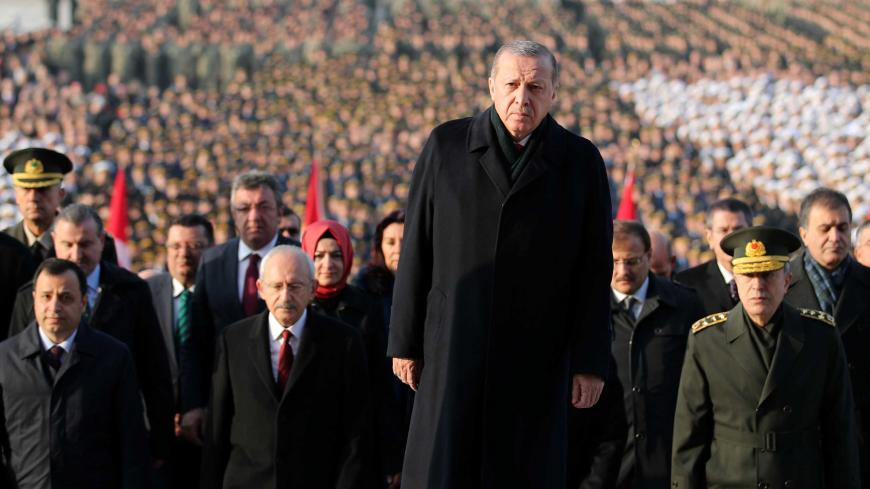 Turkey's president is continuing to assume more and more power by issuing emergency status decrees. Most recently, he has taken over the country's defense industry.

This is the second major move illustrating how executive powers are being transferred from the prime minister to the president, following an August decree that attached the National Intelligence Organization (MIT) to the president.

On Dec. 24, President Recep Tayyip Erdogan issued the decree placing the Undersecretariat for Defense Industries (SSM) under the president's full control rather than the Defense Ministry's. SSM is the key government institution in charge of the state's defense procurement and was allocated nearly $11 billion in the 2018 general budget. SSM has the power to procure, produce and sign deals for all military and police forces of the country. SSM has the highest share of the defense budget, with authority to decide what to buy and from whom. SSM is also directly responsible for the Defense Industry Support Fund, which had about $3 billion in reserve funds in 2016.

According to the new decree, the president will also chair the Defense Industry Executive Committee, which consists of the prime minister, the chief of general staff, and the interior and national defense ministers. The committee will meet upon invitation of the president, who will determine meeting agendas. The SSM provides the committee’s secretariat services.

The committee will decide on the strategic goals of Turkish security-sector actors, primarily the military and the Gendarmerie General Command, and select companies to work on procurement for the sector. The committee is also authorized to finance scholarships and training to develop human resources for the defense industry.

With this major decree, the president will control the Turkish Armed Forces Foundation, which earns 43% of the Turkish defense industry's total revenues while undertaking 41% of defense exports. As a result, the president will also control the foundation's extensive holdings, including 85% of the equity of Aselsan, the electronics giant of the Turkish defense industry, which ranked No. 67 on the Stockholm International Peace Research Institute's 2016 top 100 list of arms‐producing and military services companies. (The Turkish government's Anadolu Agency just announced that Aselsan signed a $92.5 million contract with Turkish defense and commercial vehicle maker BMC Otomotiv.)

The Turkish Armed Forces Foundation also owns 54.5% of Turkish Aerospace Industries Inc. (TAI), a pioneering Turkish defense firm in the field of aerospace and satellites, and SSM owns another 45.5%.  TAI ranked No. 76 on the Stockholm International Peace Research Institute's list.

Other major holdings include 55% of Roketsan, the only designer and manufacturer of rocket systems in Turkey; 99% of Havelsan, Turkey's top software, informatics and systems integration firm; 55% of Tusas, Turkey’s pioneering firm in aerospace technologies; 99% of Isbir, which provides power generators and alternators for important defense and public projects; and 97% of Aspilsan, a manufacturer of original equipment battery and battery pack products for major defense industry systems.

With the new legislation, the president will also serve as chairman of the Defense Industry Support Fund, replacing the defense minister as the final authority over SSM and the Turkish Armed Forces Foundation. The foundation, with its slickly produced promotions, is managed mostly by retired generals and receives serious donations in the form of money, businesses and real estate from all segments of society.

The decree also designates $15 million in starting capital for the Military Factories and Shipyards Management Corp. (ASFAT) to regulate about 30 military factories attached to the Ministry of Defense. ASFAT is authorized to take orders from national public institutions and foreign customers and can hire foreign personnel.

Erdogan recently told reporters, “I had 11 years of experience with the Defense Industry Undersecretariat when I was the prime minister. The Turkish defense industry has to operate as an integral unit. When they are separate pieces, it becomes difficult to succeed. When Havelsan, Aselsan and TAI are all separate hegemonic entities, success isn't possible. We thought of bringing them all under a single authority. The prime minister will be on its executive council, which will also include the minister of interior, chief of general staff, defense minister and undersecretary of the defense industry."

Erdogan’s remarks revealed his reasons for attaching the entire Turkish defense industry to him:

The president will personally supervise the following critical projects, he said, to improve motivation and speed project completion:

But the political opposition objects to Erdogan's absolute control of the entire Turkish defense industry, which they say denies parliament its essential oversight function.

“If we remember the enormity of the budget of the defense industry and the importance of its decisions related to national security, what's being done is making the parliament powerless while boosting the powers of the palace [presidential] regime," said lawmaker Murat Bakan, a member of the opposition Republican People’s Party.

"Why didn’t they enact a law for this arrangement instead of an emergency status decree? We see hundreds of arrangements imposed with emergency decrees that are not submitted to the parliament,” Bakan added.

With this decree, we see the merging of three processes:

To me, those three processes should be managed delicately and separately. Their merging, at the end of the day, risks politicizing all of them, particularly defense procurement and maintenance systems. In addition to the risk of politicization, if we factor in the decline of meritocratic management and a shortage of intellectual capital in the country’s security sector, it might become difficult to manage Turkey’s military procurement system, which requires top-notch technical input.

We can't ignore that burden on Turkey’s presidential palace, and that reality is becoming clearer by the day.