The Turkish government uses the defense industry to build its foreign relationships and to improve domestic standing. 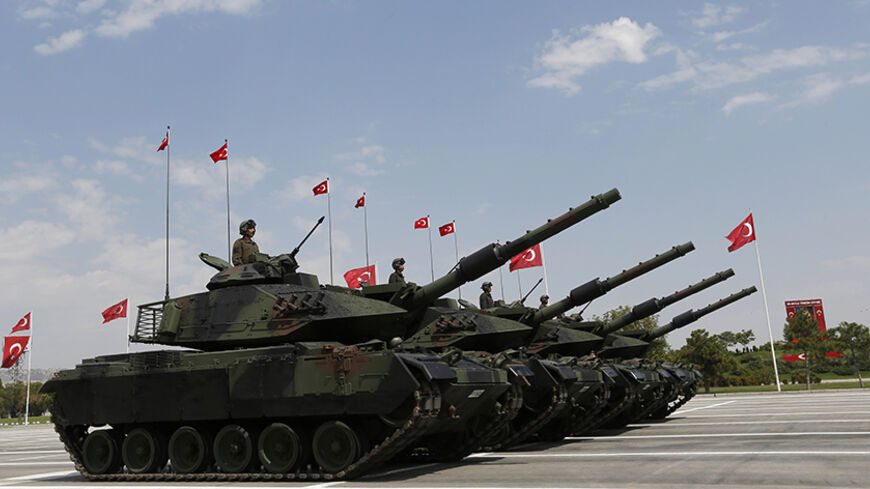 Justice and Development Party (AKP) decision-makers, obsessed of late with the idea of the “New Turkey,” have decided that to be a powerful state Turkey has to rely on a “national government-strong army-strong national defense industry” formula.

In the AKP’s aspiration to become a powerful regional and global force, the defense industry has emerged as an important political instrument.

Fikri Turkel, a writer for the pro-government daily Yeni Safak, writes about Turkey’s place in the $1.5 trillion annual global defense market, which is expected to reach $2.5 trillion in the next 10 years. Turkish decision-makers constantly say that by 2023, Turkey must get at least $25 billion from this lucrative market.

In 2008, Turkey’s defense industry exports were $600 million. At the end of 2012, exports doubled to $1.2 billion. In 2013, the number of companies working in Turkey's defense sector was more than 500, while exports neared $1.5 billion. The target for 2014 defense exports is estimated at $1.8 billion. President Recep Tayyip Erdogan in his inaugural speech to the parliament spoke about the Turkish defense industry. He said, "Turkey can now manufacture its own tanks, combat ships, attack helicopters, UAVs, communication satellites, its national infantry rifle, rocket launchers and much other defensive equipment."

In fact, 39% of Turkey’s 2013 defense industry exports were to the United States; this included airplane and helicopter assembly parts and electronic warfare software and equipment. The second-largest market, with 9.2%, was Saudi Arabia, followed by the United Arab Emirates, Bahrain, Iraq, Italy, Spain, France, Germany and Rwanda.

Latif Aral Alis, president of the Union of Defense and Aerospace Industry Exporters, said, “To some countries, we export not goods but services. For example, Turkey is developing Malaysia’s unmanned naval vehicle project. We want to open up to Central Asia, the Far East and Africa. We want to be a preferred exporter of naval vehicles.”

The driving engine of the growth of Turkey’s defense industry is the Undersecretariat of the Defense Industry (SSM) attached to the Ministry of National Defense. It is the decision-making center for all political, economic and strategic decisions related to the military industry. In the last five years, the total contracts it issued increased by 85% to reach $20 billion. SSM is targeting revenue of $8 billion in the defense and aeronautics sectors while achieving $2 billion in exports. The grandest SMM projects include the joint strike fighter with $16 billion, the ATAK helicopter with $3.3 billion and 2 billion euros ($2.56 billion) for the New Type submarine.

The AKP government is attaching importance to adding muscle to its “New Turkey” slogan also for domestic political gain. Strengthening the defense industry is seen as an integral part of the country's aspiration to become a regional and global leader in addition to expanding the country’s economy. The Turkish public loves to hear about defense industry success stories; these become an element of national pride.

In all countries of the world, the defense industry is a semi-transparent sector that usually has certain immunities and privileges. In Turkey, where state corporations dominate the sector, political and military decision-makers are both employers and managers of the sector. In such a configuration, it is easier for the sector to hide behind a wall of secrecy.

Lale Kemal, known for her articles in the defense field, said in an article titled “Will you build a warplane for prestige?” that the public has to be a bit more awake to boasts of “We will make a warplane, we are selling these weapons” — which sounds good to the ear but is misleading. She said people should know that huge sums of tax revenues are spent on these projects, some of them needlessly. She said a Turkey that says, “I will produce all my weapons and save myself from dependency abroad” continues to squander its limited resources in this field.

There are frequent complaints that small and medium-size companies known to be close to the government are encouraged to enter the defense industry, where they get preferential treatment. According to academic Sait Yilmaz, the government continues to look after partisan supporters when it comes to defense-contract awards. For example, Murad Bayar, who headed the Undersecretariat of the Defense Industry for 10 years, was removed from his post on March 28; the companies the government favors stayed. The government simply removed Bayar and appointed the Turkish Airlines general manager as the new undersecretary. There has been frequent criticism that mega-projects such as the ATAK helicopter, the national warship project and Altay, the national tank project, were politically motivated decisions that will inevitable result in defense budget deficits.

The government wants to use the defense industry as a significant instrument of foreign policy to improve its foreign relations and to build new relationships. Minister of Defense Ismet Yilmaz said Turkey, with its strong army, has become a country that many other counties want to cooperate with. He said, "To date, we have signed military training, technical and scientific cooperation agreements with 67 countries. We signed agreements for defense industry cooperation with 55 countries. We have military training agreements with 52 countries.”

With such high-profile ventures, Turkey’s defense industry has become a major topic of political debate in Turkey. Throughout history, countries have used the pretext of the threat of attack by external enemies, danger to national security and combating imperialism to expand their defense industries. The aspirations and narratives of the AKP government for the revival of neo-Ottomanism, to be a leader of the Sunni Islam world and to be a political power with influence in the Middle East, the Balkans and the Caucasus have certainly oriented the country toward a major military-industry complex.

Nurhan Yenturk, who says military spending and the defense industry need to be more transparent and held accountable, says it is crucial for parliament to exercise more audit powers and supervision. Unfortunately, in Turkey there is an aversion to concepts such as transparency, accountability, parliamentary oversight and open, constructive debate in this sector.

People instead watch with glee and pride TV programs that are nothing but populist political shows on new national weapons systems and equipment.