How lucrative is Turkey’s defense industry?

A permanent agenda item of Erdogan’s foreign travels is military cooperation and finding markets for Turkey’s defense industry products, but it's sometimes difficult to tell how much of the achievement touted in this area is real. 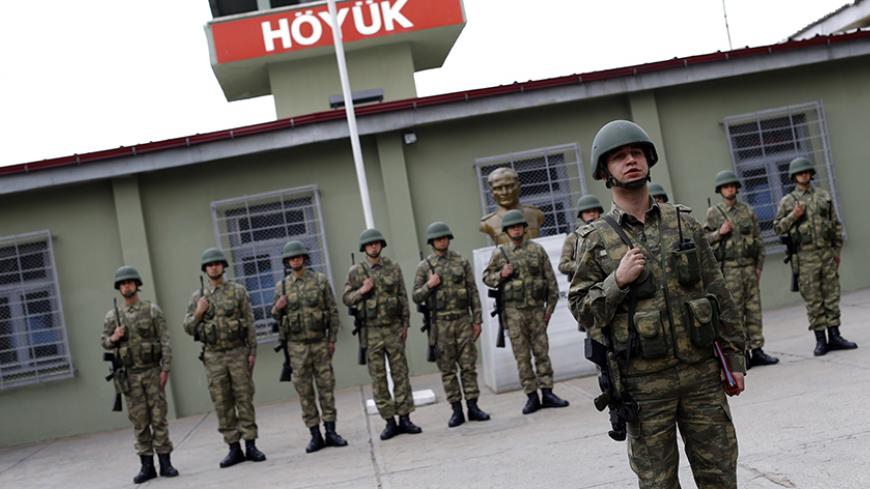 Turkish soldiers stand at attention at Hoyuk military post on the border between Turkey and Syria near the southeastern city of Kilis, Turkey, March 2, 2017. - REUTERS/Murad Sezer

Among the most grandiose ambitions of Turkey's Justice and Development Party (AKP) government is making giant strides in national defense, diminishing dependence on foreign sources and eventually becoming an exporter of defense products. Concurrently, the government is making a point of emphasizing "defense and weapons" in its diplomacy.

With abundant embellished reports of inventions and major successes in production of armored vehicles, missiles, helicopters and drones, the ground is prepared for President Recep Tayyip Erdogan’s foreign travels.

According to government officials, this marathon campaign supported by Erdogan’s personal credibility is based on solid foundations. But what is its scope? The latest effort to add credence to ambitious claims came at the International Defense Industry Fair held May 9-13 in Istanbul. Pro-government media claimed the fair was a sensational success.

Turkish media get carried away by these promising events. According to economist Gungor Uras, in 2003, only 25% of the needs of the Turkish Armed Forces were met locally; that figure has reached 68%.

Turkey's investments in the sector now total $3.5 billion, with annual production of $2 billion to $3 billion. The Defense Industry Undersecretariat now supervises 269 projects. Yet Turkey's military expenditures have been stable for more than 15 years. According to data provided by Stockholm International Peace Research Institute (SIPRI), Turkey’s military expenditures were $15.3 billion in 2002 and $14.9 billion in 2016.

Turkey’s political discourse and media reports are constantly referring to cooperation protocols and agreements. But it is not clear how many of these massive investments are actually realized. There's a lack of transparency in the defense industry, and the Turkish government makes a habit of exaggerating pleasing news. Available export figures are modest compared to sensational ambitions. Most of the media's promising articles start with, for example, “Defense industry exports are up seven times over 15 years” — but seven times what? How significant is this increase?

During the past 15 years, annual research and development expenditures have climbed from $1.8 billion to $20 billion.

According to Prime Minister Binali Yildirim, in 2002, Turkey exported $250 million worth of defense products. Figures from Turkey’s Exporters Assembly show that in 2016, Turkey’s defense and aeronautics sector made foreign sales of $1.68 billion. One-third of those sales in 2016 were to the United States, followed by sales to Germany, Malaysia, Azerbaijan, Britain, UAE, Qatar, Saudi Arabia and Tunisia.

Given the emphasis and efforts made, these figures are not mind-boggling, especially as the AKP Vision Document for 2023 calls for $25 billion of annual defense industry exports. In 2011, annual defense exports were $883.8 million.

There is a long way to go to achieve the 2023 target. But Demir tried to sound optimistic. “We want to reach the $25 billion level in 2023. We are determined. We are not going to change that target, although it seems somewhat ambitious. We will expand the sector and increase international cooperation,” he said.

This vibrancy in the defense industry, although not yet backed up by numbers, indicates Turkey’s goals. The psychological motivation here comes from a government mesmerized by the grandeur of the Ottoman era and that dreams of making Turkey's army the strongest and increasing Turkey's global influence. Turkey is not content with its place among weapons-exporting countries. SIPRI says Turkey is the 16th-largest exporter in that sector.

Several other factors encourage Turkey’s focus on this sector. First, Turkey is aware of Iran’s advances in developing its own defense systems and doesn't want to lag behind. Second, Turkey now believes that it can’t be a regional leader simply by depending on NATO. Moreover, Turkey’s disputes with the West encourage it to become more independent in defense. Of course, Turkey’s increasingly interventionist foreign policy is another element encouraging its national defense industry.