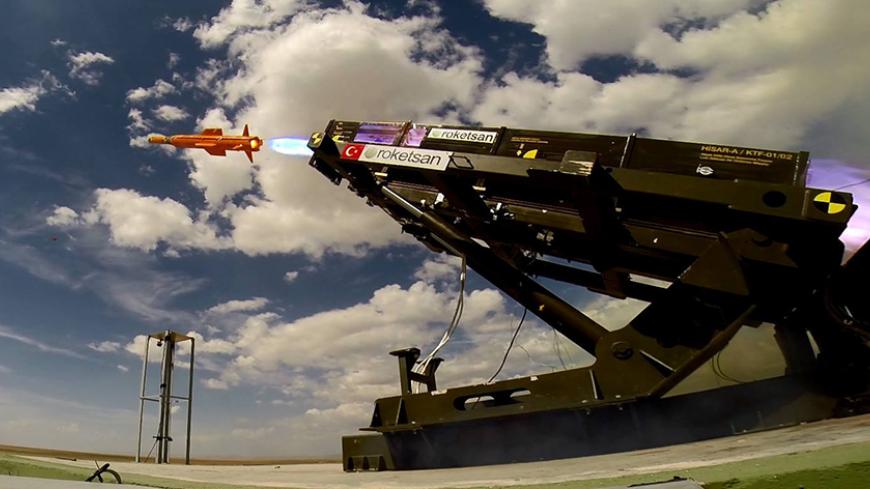 One of Turkish company Roketsan's products is seen in an undated promotional image. - Facebook/roketsangururumuz

Attendees of the biennial International Defense Industry Fair (IDEF) can expect to see many brand-new products, including a record number of items made by Turkish companies targeting foreign buyers. The fair, held by the Turkish Armed Forces Foundation and designed for the defense, security, maritime, and air and space industries, will take place in Istanbul on May 9-12. Turkey is the only NATO member to hold a defense industry exhibit in the Middle East.

Defense expert Hakan Kilic told Al-Monitor that in previous years, IDEF events displayed either items co-produced by Turkish companies or products of foreign companies targeting the Turkish market. This year, however, a record number of products made by the Turkish defense industry will be on display.

“For me, the most important development of the fair this year will be that the Turkish Armed Forces [TSK] is no longer the sole potential customer at a fair where 600 companies from 50 countries will be exhibiting,” he said.

The most anticipated projects at this year’s fair will be the KAAN missile system produced by TSK-affiliated Roketsan AS and the TRG-300 (Tiger) Kaplan missiles, which will be shown for the first time. Another system making its debut is the Bora (Turkish for Storm) long-range missile that Turkey is developing by transferring the technology of China's B 61-11-M model. Bora will be Turkey's first missile that can reach beyond 300 kilometers (186 miles).

Simulators developed to train pilots of Atak assault helicopters will also be shown for the first time. Another initial showing will be a 155 mm (6-inch) high-mobility artillery, to be mounted on 6x6 trucks, being developed by Turkey’s state-owned Mechanical and Chemistry Industry Corporation.

Also bound to attract attention will be the prototype Hurkus-C turboprop-powered plane, made to provide close air support in low-intensity combat, and the UMTAS air-to-surface anti-tank guided missiles this plane will be armed with.

The electromagnetic railgun Sapan (Turkish for Sling) will be another product attracting inquiries. This system is expected to open a new era in air and missile defense technology. Turkey has already produced a prototype and wants to advance in this field to become the fifth state — after the United States, the United Kingdom, China and Russia — to have the technology.

Another project making its initial appearance will be the national combat plane (TFX) project and Goktug, the Turkish version of the US-made Sidewinder-9 guided missiles.

This year’s IDEF is expected to emphasize solutions to issues encountered during Turkey's Operation Euphrates Shield and internal security operations. Focal points will include many aerial platforms such as the TFX, the national project to develop helicopters and a variety of drone projects.

Turkey is truly interested in developing its defense and aerospace industries. In 2008, its defense exports were only $600 million. In 2016, exports stood at $1.68 billion. But Turkey's defense industry has slowed down during the past three years. For example, in 2016, exports rose only by 1.5% over 2015. For Turkey to achieve its goal of $25 billion in defense industry-related exports by 2023, the sector has to grow by a factor of 15. That doesn’t seem very feasible, as Turkey will first have to cope with important structural questions about the defense, aerospace and space industry sectors.

Defense industry expert Arda Mevlutoglu told Al-Monitor that Turkey is now at a juncture. “The Turkish defense industry registered extremely rapid growth over the last 10 years. Many projects were on the table. But we have now reached the point of transition from prototypes to production. It will have to deal with issues such as assembly-line production and after-sales support. Can we manage sustained production of those prototypes? It won’t be easy. Only if a healthy industrial policy is followed can we perhaps preserve the gains made until now,” he said.

Above all, the sector has a serious productivity issue. Production schedules and budgets are not followed, he noted. Resources aren't used properly or effectively. State support to strengthen the sector is essential, but it must come in a form that encourages competition. Turkey hasn't reached that competitive environment yet, and companies that aren't challenged by competitors can become complacent, lose productivity and forget about innovation.

Another structural problem is the lack of qualified manpower and intellectual capital. According to Mevlutoglu, today there are about 35,000 people in Turkey's defense, aerospace and space industries, but only about 3,000 are engineers and white-collar workers who can be classified as qualified personnel. For Turkey to reach its defense industry exports goal of $25 billion, qualified manpower has to rise fourfold to 12,000. Decision-makers in Ankara don’t have a roadmap or the vision to achieve this personnel goal. Unless they can overcome this serious deficiency, projects they promote will not go much beyond prototypes or very limited production.

Turkey’s defense and aerospace industries increasingly resemble its booming construction sector. Overblown, embellished success reports encourage many companies to enter the fields. But nobody tells them about the failures. There are reports of orders that can’t be filled, deadlines that aren't met and massive failures during testing. Nevertheless, the slogan of the sector is still, “Whatever the TSK wants, we will produce,” which is hardly an innovative approach.

Given the dominance of local giants as Aselsan, Roketsan and Havelsan and the extreme pressures exerted by foreign companies, it is practically impossible for small- and medium-sized Turkish companies in software writing, electronics and optical systems to stand alone, go after tenders and perhaps set off on the road to becoming global brands.

And finally, like everything else in Turkey, increasing politicization of the sector is also becoming a major structural impediment to its growth.