The Turkish navy aims at becoming a major global force by 2033. 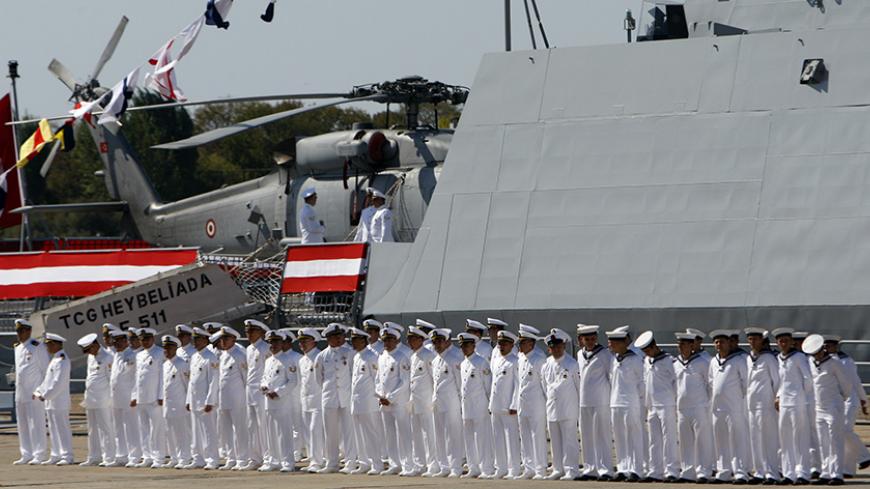 The most important event of the International Defense Industry Fair, organized in Istanbul May 5-8, was the signing of an agreement between Turkey’s Undersecretariat for Defense Industry (SSM) with Turkish Sedef and Spanish Navantia for construction of a $1.2 billion landing platform dock (LPD) that has emerged as the prestige project of the Turkish navy.

This project has become the most expensive defense project to be attempted in Turkey.

The LPD is planned to be delivered to the Turkish navy in 2021. Mujdat Uludag, the director of the Naval Vessels Department of the SSM, said, "Our naval command will deploy the LPD that will be constructed in Turkey in operational areas of the Aegean, Black Sea and Mediterranean and when necessary in the Indian Ocean and the Atlantic.”

This ship is designed to accommodate 1,450 persons and could sail for 50 days without resupply at 22-knot speed. The LPD, when needed, will be used for natural disaster relief with its fully equipped 34-bed hospital. The LPD, which will displace 27,436 tons fully laden with a length of 231 meters (757 feet), is the biggest naval platform of the Turkish navy. At the request of the navy command, a ski jump will installed on the LPD. This will enable Turkey to acquire 15 F-35B (short takeoff, vertical landing) aircraft as part of 100 F-35s it plans to purchase.

Although Turkish news media has been describing the LPD as an aircraft carrier, experts say it will have facilities and capabilities beyond those of a carrier. Expert Devrim Yaylali, who knows the Turkish navy well, told Al-Monitor that this platform, although it will not carry as many planes as a regular aircraft carrier, will nevertheless have its own fighter plane component. But, distinct from a carrier, it will be able to deploy combat troops, their weapons, ammunition, main battle tanks and other vehicles to crisis zones and will take part in landing operations with the landing ships it will carry in its pool.

Yaylali said, "This capability will boost force redeployment capability of the Turkish navy phenomenally." Yaylali also noted that there could well be other uses of the platform in areas of Turkey’s interests.

"In addition to its military uses, this ship will be useful in operations other than war. For example, in 2011 when the civil war broke out in Libya, scores of civilian and military vessels were mobilized to evacuate more than 20,000 Turks working in that country and these vessels had to make many risky trips. If we had had a platform vessel we could have evacuated our citizens faster with fewer trips and with less exposure to risks. Moreover, the armed helicopters or combat aircraft based on the LPD could have provided protection to the evacuees from the air. Or, in 2004, when Turkey decided to send assistance to Indonesia after the Aceh tsunami, we could have sent more relief supplies and delivered them to the victims from the air and the sea. The medical facilities of the LPD could have provided essential medical assistance to suffering civilians.”

From Yaylali’s remarks, it seems that the capabilities offered by the LPD will make it an important instrument of foreign policy that will accentuate Turkey’s soft power beyond its military prowess.

The project is supported enthusiastically not only by the Turkish navy but also by President Recep Tayyip Erdogan and other Justice and Development Party (AKP) politicians. There are actually rumors that the ceremony to sign the agreement for the LPD was hastily moved up to this year's defense industry fair under pressure from Erdogan. In short, the project has become a prominent prestige military-security project for the Turkish navy and an internal and external foreign policy tool for AKP leaders.

Another aspect that adds to the importance of the LPD project will be its major contribution to alleviate the serious and highly damaging traumas the Turkish navy suffered from the Sledgehammer and Ergenekon coup plot cases.

Ilker Gurel, who is doing research on naval security at Bilkent University of Ankara, had an ambitious vision in mind when he was speaking to Al-Monitor:

”A country that aims at becoming one of the top 10 economies of the world in 2033 with $2 trillion gross national product — that will be one of 32 countries using nuclear energy by building two nuclear power stations and which will have production capacity based on about a population of 90 million — will need to have national interests on a global scale. ... Today, perhaps it is the navy command that best forecasts the future by working on having a base in Qatar, increasing its capacity to intervene in Somalia and showing the flag in the Asia-Pacific in recent years. Now with the LPD project the navy seems to have succeeded in taking a quantum leap.”

It appears that the military and political decision-makers have achieved a consensus on equipping Turkey with new military capacities and strengthening its national defense industry. The military, more concerned with the technical dimensions of this consensus, are pursuing a transformation and restructuring process with the “TSK 2033 Vision” while politicians will want to use this new capacity and energy in domestic and foreign politics.

There is, however, much concern about how the military decision-makers will manage this major transformation and restructuring process given the foreign dynamics it has to deal with, such as: the civil war in Syria and the conflict in Iraq; the Islamic State threat; clashes in Ukraine; escalating ethnic, religious and sectarian tensions in the Middle East and the Balkans; the internal dynamics of the fragile solution process with the Kurds; the debate on authoritarianism and societal polarization; the legal and structural issues of Turkey’s border security; and how to cleanse the ranks of Gulenists who are said to have penetrated the TSK. In short, in coming months, Turkish generals will have to make use of all their skills.