Moscow is taking a low-key approach to the demonstrations in Iran, trying not to step on any toes while assessing how the unrest might affect Russia, as well as its efforts in Syria. 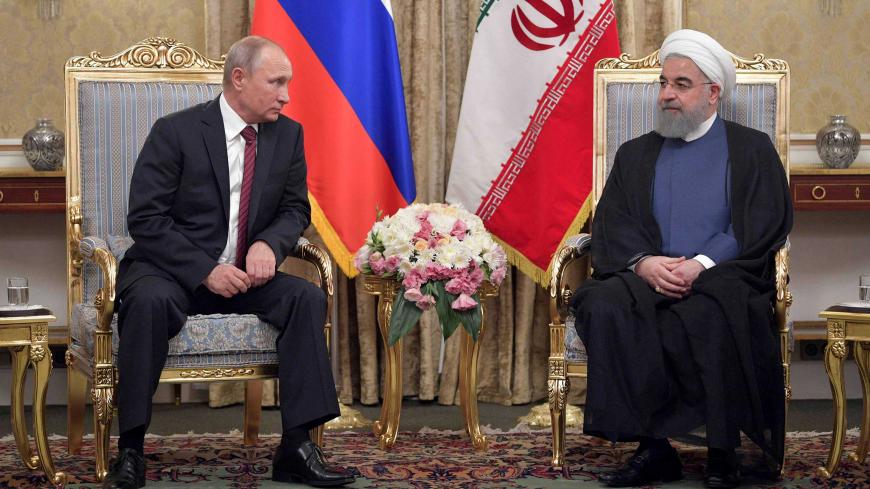 MOSCOW — Russia is carefully observing the mass unrest across Iran, taking a very cautious stance of not saying or doing anything that might be seen as encroaching on Iranian domestic issues.

"We express hope that the situation won’t develop under the scenario of bloodshed and violence," the statement read. "External interference destabilizing the situation is inadmissible."

Major Russian-state TV networks doubled down on the message. While they mentioned economic grievances and the unemployment situation in Iran, they stressed that the challenges are “manageable,” but that “outside forces” are working hard to aggravate the problems. TV channel Russia-1 said in a news program that Iranian Supreme Leader Ayatollah Ali Khamenei's claims that the protests were being fueled by the United States, the UK and Saudi Arabia "weren’t entirely groundless." The station referred to “Iranian sources” that suggested “every third tweet instigating protests [was coming] from Riyadh."

“When Trump came into office he promised that the US would reject regime change anywhere in the world," a retired Russian diplomat, speaking not for attribution, told Al-Monitor by phone. "What we are seeing now is the United States continuing to do what it had been doing for decades — urging [others] to oust governments via information campaigns, support for protest movements and, possibly, covert operations.”

Conservative commentators referred to the CIA's Iran Mission Center, set up in July by the Trump administration, as a sign of America’s long-planned effort to undermine the rule of Iranian authorities.

The more mainstream argument from the right boils down to that Moscow needs to show more robust support for the protesters to ensure the favor of ordinary Iranians, which could help build ties with any “protest candidate” who might surface.

But as Moscow and Tehran have developed a “special partnership” in Syria, the Kremlin is unlikely to seriously consider such a move. What Russia is worried about, though, is whether the protests are going to weaken the scope of Iran’s engagement in Syria. The forces of Syrian President Bashar al-Assad have been advancing on key rebel-held areas in the past few days and — given Russia’s relative pullout — Tehran could jeopardize the situation for the pro-Assad coalition by scaling back operations. There could be a silver lining, however: The situation might push Tehran to join Moscow in advocating a speedier political solution to the Syrian conflict, which is increasingly consuming financial resources and burning political capital. For Moscow to figure out the accuracy of this scenario, it’s important to understand just how serious the protests are.

Russia’s leading Iran expert, Vladimir Sazhin of the Institute of Oriental Studies of the Russian Academy of Sciences, doubts the protests will lead to regime change but says they could lead to serious political change inside the country.

He said that President Rouhani's government has done a lot in the economic area but that Iranian activity " in Iraq, Syria and Yemen distracted a lot of resources, which spurred indignation among some parts of the population." He added, "The educated are displeased with the restrictions that 'the Islamic component' places on them."

The liberal media in Russia reject the idea that “outside interference” is a driving force behind the protests. Rather, an argument is being made that Iranians' protest claims are similar to those that feed the protest mood in Russia itself: economic grievances and corruption.

To proponents of this narrative, the debate over the “Persian Spring” in Moscow reflects — or should reflect — bigger concerns over Russia’s own presidential election in March.

In the 2012 election campaign, Vladimir Putin’s slogans were “Strong Economy — Strong Russia” and “Strong Russia in a Complicated World.” Putin’s critics don’t feel he was successful in delivering both. His supporters tend to believe he has made Russia a more powerful player globally, but they tacitly recognize there’s a lot of work to be done on the economic side.

While Russia’s Central Election Committee says 75% of Russians are ready to vote for Putin on March 18, another survey showed 24% of Russians cite low wages and the overall quality of life as “the most significant problem” for the country (last year it was 14%). Other top problems cited were the state of the economy (21%) and social policies (18%). Paradoxically, 85% of those surveyed said they are happy — the highest since 1991.

Sergey Markedonov, Russia’s leading expert on the Caucasus, argued that comparing the unrest in Iran with occasional protests on the streets of Moscow isn't valid. “Russia and Iran are way too different on many levels," he said. "While Iran is a very ideologized country, Russia, in its turn, is lacking ideology. Besides, Iran is a country with a rich history of protests. Using protests as a template to [predict an impending] fall of authoritarian governments is rather wishful thinking — not a serious attempt to get a grasp on what is really happening in both countries.”

The other extreme, he argued, is the conservative narrative that sees the Iranian protests as a link in the chain of “color revolutions” — the series of mostly nonviolent uprisings in the Balkans and parts of the former Soviet Union in the early 2000s. “This is a gross simplification," Markedonov said. "Protests in Ukraine, Egypt and Iran are all of different natures.”

Sazhin said, “The two groups in Iran — liberal Reformists led by Rouhani, and conservatives who seek to maintain Islamization — continue to struggle. The liberals can twist the protests to support their own agenda, saying, 'See, the people want change. Don’t stand in the way of our reforms!' The conservatives, on their side, may respond, 'Look, the liberals failed to carry out their reforms; we need to be tightening the screws.' So in a way, the protests play the game of both camps.”