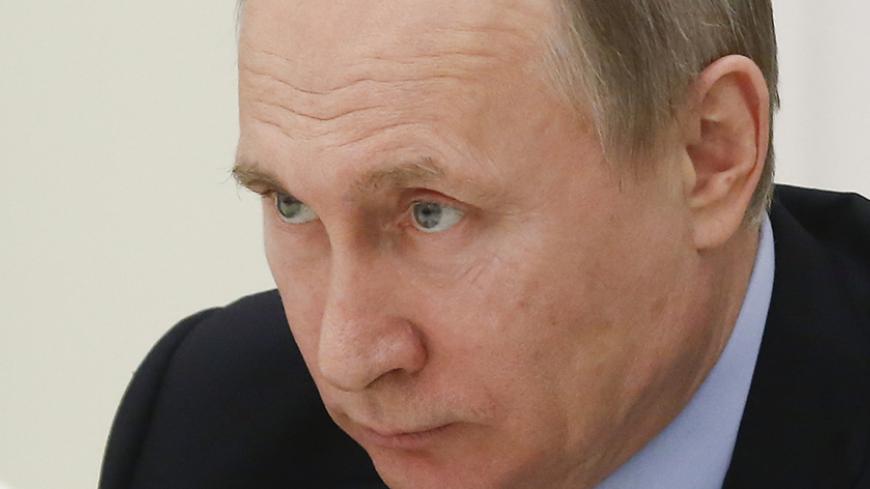 Russian President Vladimir Putin attends a meeting with Li Zhanshu, the director of the General Office of the Central Committee of the Communist Party of China, at the Kremlin in Moscow, April 26, 2017. - REUTERS/Maxim Shemetov

On April 20, Iranian conservative presidential candidate Ebrahim Raisi met with visiting Tatarstan President Rustam Minnikhanov — an encounter that Raisi probably did not expect would end up causing problems ahead of the May 19 presidential elections.

The hard-line Tasnim News Agency, which is seen as backing Raisi and reported the meeting, described Minnikhanov as an envoy of Russian President Vladimir Putin, seemingly to highlight Raisi’s stature.

During the meeting, Minnikhanov reportedly told Raisi, “We hope that the relationship between Iran and Tatarstan will be [further] developed.” He added, “Vladimir Putin gives special importance to the spread of religion, including Islam, as he has formed a strategic group, which I head, for developing relations with Islam [the Islamic world].”

Tatarstan is a federal republic in the Russian Federation, in the Volga region. In 2010, then-Russian President [and current Prime Minister] Dmitry Medvedev nominated Minnikhanov as its president.

Following the Minnikhanov-Raisi meeting, which was widely reported under the headline “Putin’s envoy met Raisi,” many moderates and Reformists harshly criticized the conservative presidential candidate.

Iranians commonly hold unfavorable views of Britain and Russia in particular, given historical grievances about occurrences such as czarist Russia’s annexation of vast Iranian territories under the treaties of Gulistan in 1814 and Turkmenchay in 1828. To this day, the names of these treaties are used in the political lexicon as references to humiliating agreements and commitments.

In reaction to the controversial meeting, Alireza Rahimi, a member of parliament’s foreign policy and national security commission, said April 22, “The recent meeting raises the suspicion of [Russian] interference in the [May 19] elections, which is not appropriate.”

Rahimi added that if the meeting was held within the framework of Raisi’s presidential campaign, it would be considered as beyond protocol and that Iran’s Foreign Ministry should thus explain what was sought through the holding of such a meeting.

On the other hand, Hossein Sobhani-Far, the head of the parliamentary friendship committee between Iran and Russia, denied that Moscow was interfering in Iran’s elections. “The Tatar president is Muslim and sought to visit [the holy shrine of the eighth Shiite imam, which Raisi manages]. … It is unlikely that a small province [Tatarstan] of a country would interfere in Iran’s elections,” Sobhani-Far said April 22.

This is not the first time that reports about potential Russian interference in Iran’s internal affairs have raised eyebrows. In December, the Tabnak news site, close to former Islamic Revolutionary Guard Corps commander Mohsen Rezaie, called on Iranian officials to send a message to Moscow that it not meddle in Iran’s domestic affairs.

According to an April 26 report in the Reformist Ghanoon daily, conservatives made a similar move in the 1997 presidential elections, when Mohammad Javad Larijani, a supporter of conservative candidate Ali Akbar Nategh-Nuri, met with a high-ranking British diplomat amid the campaigning. News of the meeting was leaked and is believed to have played a role in Nategh-Nuri’s defeat to Reformist Mohammad Khatami.

Ghanoon also said that in czarist Russia, a form of life-or-death bet was common in which a player would place a single round in a revolver, spin the cylinder, place the muzzle against his head and pull the trigger. Ghanoon continued, “This dangerous game is recognized as Russian roulette. It seems that Raisi’s meeting with Putin’s envoy evokes Russian roulette. Raisi will either lose many of his votes due to the negative propaganda, or this meeting will open the gates of success and triumph to him.”