In an impromptu visit with reporters on Friday, US Defense Secretary James Mattis denied that Iran had succeeded in constructing a "land bridge" through the Middle East. 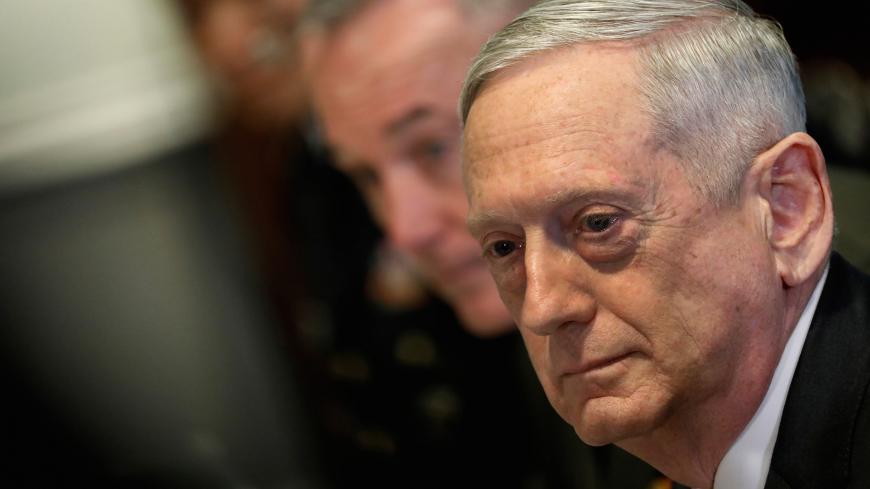 As the Pentagon prepares to release its first strategy under the Donald Trump administration later this month, US Defense Secretary James Mattis said today that Iran has not succeeded in creating a so-called land bridge through Syria to the Mediterranean Sea.

Over the summer, Iranian-backed groups helped Syria’s President Bashar al-Assad regain access to large oil fields near the Iraqi border and gave Tehran a chance to link up with Shiite militias in Iraq. The move stoked fears that Iran would use those gains to send more Shiite fighters into the region and establish a Shiite crescent all the way to Lebanon.

Mattis said Iran’s progress in creating land links to Tehran had been stalled due to the ongoing fighting in the region against Islamic State (IS) remnants and other forces.

“There’s still enough rough terrain, rough enemy units that haven’t been cleaned up,” Mattis said. “Plus, we’ve got the combination of the people we’re fighting and advising in Syria are abutting in some cases, Russian forces who are abetting the regime abutting the Turkish elements. I don’t think there’s a land bridge right now.”

US forces are expected to remain in country as the United Nations attempts to resurrect political talks that stalled last month when pro-Assad groups refused to participate. Though the United States has 2,000 troops in Syria to advise forces fighting IS, Mattis has indicated that American units will not enter regime-held territory to defeat the militant group.

Mattis refused to signal whether American troops could be used to deal with Iran’s growing presence in the country. In December, the Wall Street Journal reported that White House national security adviser H.R. McMaster may give a policy speech early this year outlining a new US strategy in Syria.

While credible figures on Iranian-backed troops in Syria are hard to come by, the number of deaths of Shiite fighters in the country appears to have surged over the past year as Tehran has deepened its involvement. Speaking in December, McMaster indicated that Tehran helps provide as much as 80% of Assad’s fighting force. Last month’s National Security Strategy called Iran a “rogue state” and a primary competitor to America’s interests in the Middle East.

Yet it’s not clear that US efforts to deter Iran in Syria are connected to a broader regional strategy.

As the Trump administration faces several deadlines next week on whether to reimpose sanctions on Iran that were lifted under the 2015 nuclear deal, Mattis said the Pentagon would continue to call out signs of Iranian misbehavior in the Middle East, without going into detail. Concrete military steps may become more apparent with the January release of the National Defense Strategy, the Pentagon’s unclassified assessment of global military challenges that the United States faces.

Last month, US Ambassador to the United Nations Nikki Haley held a press conference in front of what she said were segments of Iranian missile parts used in Houthi attacks against Saudi Arabia from Yemen, as part of a concerted US effort to name and shame Iran.

“We watch all the time for the indicators,” Mattis said. “So if anybody thinks they’re not exporting ballistic missiles or weapons or explosive boats down to Yemen, there it is. We all know what they’re doing in Syria. We’ve seen what they’re doing in Bahrain and the eastern province of Saudi Arabia. So it goes on, and my intent is to show that to the world.”

But Mattis said that ongoing protests in Iran would not impact his advice to Trump on whether to reimpose sanctions on Iran that were lifted under the nuclear deal.