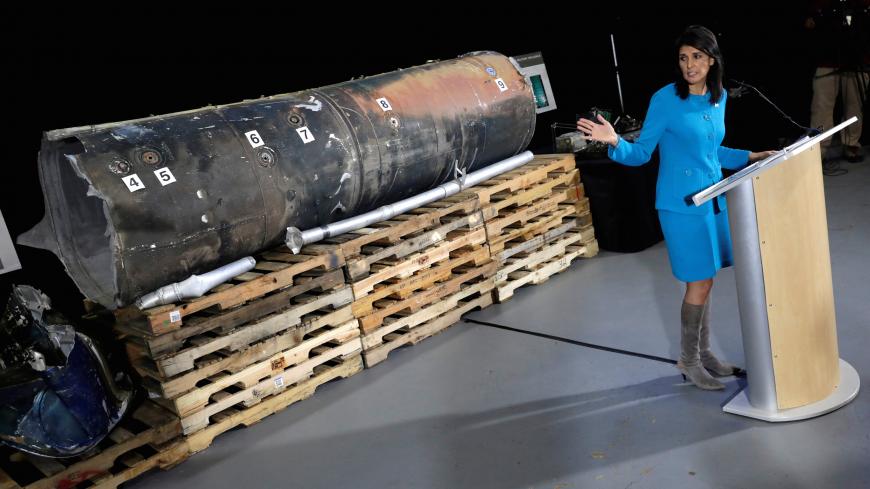 US Ambassador to the United Nations Nikki Haley briefs the media in front of remains of an Iranian Qiam ballistic missile provided by the Pentagon at Joint Base Anacostia-Bolling in Washington, Dec. 14, 2017. - REUTERS/Yuri Gripas

Standing in a US military air hangar amid a tableau of alleged Iranian missile parts, US Ambassador to the United Nations Nikki Haley called out Tehran in strong terms today for “destabilizing behavior” throughout the Middle East but provided little clarity on how Washington would respond.

The announcement drew together missile fuselages allegedly fired on Saudi Arabia in July and November by the Iran-backed Houthi rebel group in Yemen, combined with diagrams and markings that US officials said confirmed their Iranian origin. Haley said the decision to declassify the evidence came as part of the Donald Trump administration’s effort to call out Iran’s support for proxies across the region.

“We did this for a single urgent purpose, because Iran’s regime cannot be allowed to engage in this lawless behavior anymore,” Haley said.

US officials believe that the Houthis used a type of missile to target Saudi Arabia in November not yet seen in the yearslong conflict. The Saudi air force used US-built Patriot missile batteries to shoot down the alleged Iranian Qiam-1 missile over King Fahd International Airport, near Dammam, a major oil production center. US officials said that the weapons displayed today were missing large stabilizer fins that are present on other short-range ballistic missiles.

While Haley called for UN action to disrupt the alleged Iranian weapons pipeline to Yemen, she provided reporters with no new information that indicated how the missiles got into the country despite an ongoing Saudi-led embargo.

Previously, Houthi forces, which are believed by the United States to receive training and equipment from Iran's Islamic Revolutionary Guard Corps (IRGC), used Scud-B and Scud-C missiles to attempt to strike Riyadh.

Today’s announcement comes on the heels of a UN report that indicates Iran could be violating a handful of Security Council resolutions by trafficking arms near the Gulf of Oman and allowing Qasem Soleimani, the head of the IRGC’s Quds Force, to travel to the battlefield in Iraq and Syria. The report also found that Iran had possibly participated in the transfer of ballistic missile parts to Houthi rebels in Yemen. Those findings served as a key basis of Haley’s presentation.

Though the nuclear deal, signed under the Barack Obama administration, did not explicitly cover Iran’s ballistic missile program or alleged support for terrorist groups, the UN Security Council resolution endorsing the pact does call upon Iran to end those activities.

"When the president said that there were problems, these are the problems that he was talking about,” Haley said. “It’s hard to find a conflict or a terrorist group in the Middle East that doesn’t have Iran’s fingerprints all over it.”

She indicated that the Pentagon also planned to declassify Iranian-marked weapons used in conflicts in Lebanon, Syria and Iraq.

Yet beyond accounting for alleged evidence of Iranian malfeasance, Haley did not make clear how the Trump administration would respond. International delegations and members of Congress will soon view the missile fragments, and Haley cited Trump’s October decision to kick the nuclear deal back to Congress, and the UN report on the Yemen projectiles, as evidence that the United States was preparing a tougher response.

It’s not clear when that will be coming. Saudi Arabia’s Crown Prince Mohammed bin Salman said in October that Iran’s supply of missiles to the Shiite rebels in the conflict could constitute “direct military aggression” on par with an act of war, but Pentagon officials have not indicated that Washington is preparing to respond to the November attack.