Secretary of Defense James Mattis insisted that Moscow had little control over Syrian troops that attacked US allies; Mattis also dismissed fears that the United States is getting dragged into another Middle East war. 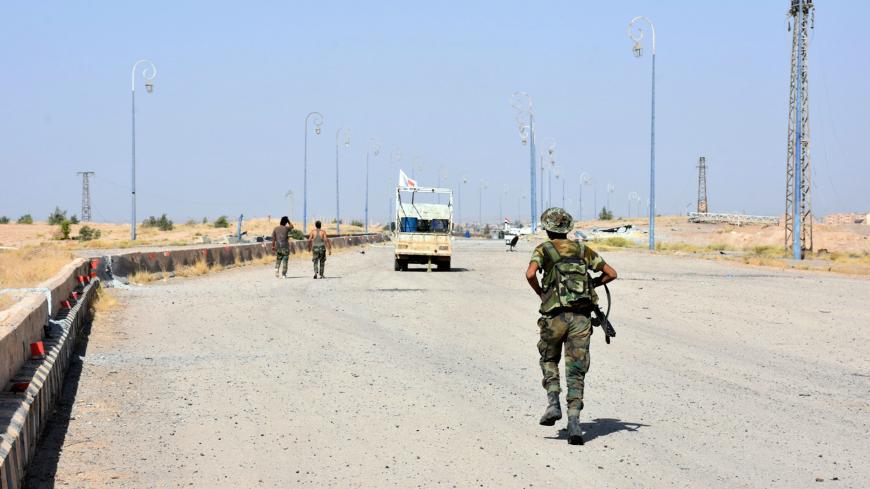 Syrian army soldiers walk along a street in Deir ez-Zor, Syria, Sept. 11, 2017, in a photo provided by the Syrian Arab News Agency. - REUTERS/SANA

The retired Marine general’s comments came one day after US special forces helped repel some 300 pro-Assad troops who reportedly targeted a Syrian Democratic Forces (SDF) facility in Deir ez-Zor with tanks and artillery. The response left about 100 attackers dead, according to the Pentagon.

Mattis said the United States had relayed their concerns about Syrian troop movements to Russian forces via a de-confliction hotline based at a US base in Qatar. Russia’s inability to stop the attack showed a lack of influence over Assad’s troops, he added, rather than a failure of the de-confliction channel.

“There were elements in this very complex battlespace that the Russians do not have control of,” Mattis said in response to a question from Al-Monitor about whether Russia had any influence over the forces that attacked the SDF facility. “You can’t ask Russia to de-conflict something they don’t control.”

Wednesday night’s incident occurred in northeastern Syria, where the 50,000-strong SDF, a mix of Arab and Kurdish fighters, is taking on fewer than 2,000 remaining Islamic State (IS) militants. Simultaneously, the Donald Trump administration has pressed Russia to stop Assad from using chemical weapons against Syrians in rebel-held outposts in the Damascus suburbs of Eastern Ghouta and the northwestern province of Idlib, where Assad-backed units are battling a mix of Islamists and rebel groups.

Three incidents of the Syrian regime using chlorine gas in Eastern Ghouta have been reported over the past 30 days, State Department spokeswoman Heather Nauert said last week. And Mattis told reporters today that the Pentagon was investigating the use of deadly sarin gas by the Assad regime, which prompted US cruise missile strikes in April 2017.

Mattis said he could not verify a CNN report that Russia-backed contractors participated in Wednesday’s attack on US-backed forces. “We don’t think there were any Russians,” Mattis said.

He went on to describe Wednesday night’s clash as a one-off event where US-backed troops under attack took a defensive stand consistent with international law. “We are not getting involved in the Syrian civil war,” he insisted.

Those reassurances have done little to quell the growing unease on Capitol Hill, where lawmakers are increasingly worried that the Donald Trump administration is dragging the country into another Middle East war without proper congressional authorization.

“Yesterday’s confrontation between US and pro-Assad forces in territory retaken from [IS] last year raises serious questions about our continued presence in Syria,” Senate Foreign Relations member Tim Kaine, D-Va., said in a statement today. “I am gravely concerned that the Trump administration is purposefully stumbling into a broader conflict, without a vote of Congress or clear objectives.”

Indeed, some experts believe the reported buildup of Russian military contractors near the Euphrates River, where the majority of anti-IS operations are still going on, shows that Russia is serious about putting pressure on the 2,000 US troops who remain in the country to advise, assist and train Syrian rebel forces.

“The expanding presence of Russian private military contractors has been very effective in shoring up the Assad loyalist forces,” said Nick Heras, a fellow at the Center for a New American Security, a Washington think tank. “There’s a real legit question that the US should ask itself: [whether] the Russians are going to use the [contractors] as a little green man presence to put pressure on the US in eastern Syria.”