Will Fatah launch 'intifada of independence'?

Palestinians warn that absent a diplomatic route toward Palestinian statehood, Fatah might launch in 2018 an intifada of independence. 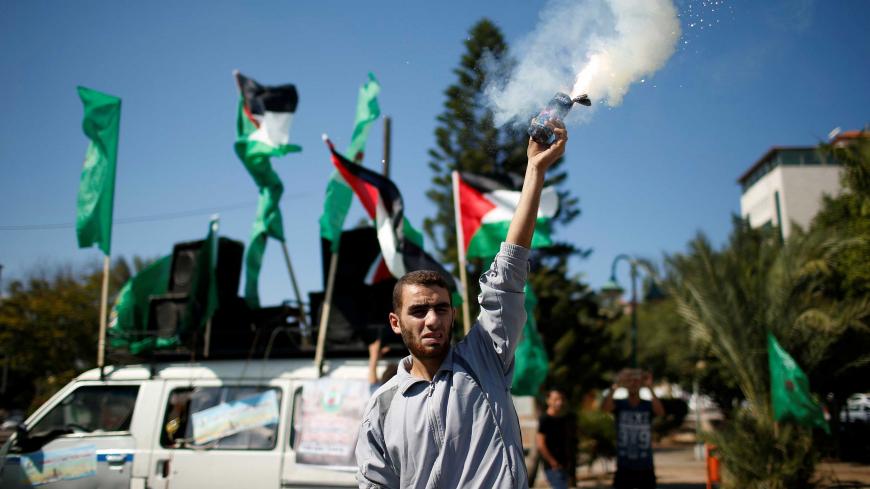 The mood in the West Bank city of Ramallah these days is one of doom and gloom. It seems that all diplomatic doors have closed as US President Donald Trump has decided to take the Israeli government’s side and is apparently guided mostly by domestic considerations. The European Union is relatively isolated by the United States and is mostly concerned with the cohesion of the EU after Brexit. The sweeping majority at the United Nations General Assembly against the US’ Jerusalem proclamation did not produce any tangible results. The diplomatic process is hopelessly deadlocked.

According to a senior PLO official close to President Mahmoud Abbas, the Palestinian president is losing hope that a diplomatic route could lead to statehood in the foreseeable future. Still, Abbas keeps communicating with his main Arab partners — Egypt, Jordan and Saudi Arabia — on various initiatives, such as the recognition of a Palestinian state under occupation by the UN General Assembly. Speaking bitterly, the official admitted that while the Palestinians can collect a large number of diplomatic victories at the UN, on the ground there is only one process taking place — a process that includes the enlargement of Israeli settlements, the deepening of the occupation and a growing economic annexation.

The official told Al-Monitor that he took part in several high-level Fatah deliberations on a strategy for 2018. Abbas has repeatedly instructed not to engage in violence against Israel, but this option has not been taken off the table in any of the deliberations. In one of those meetings, the option of closer unity with Hamas was seriously contemplated. The participants of the meeting argued that with the increasingly frustrated Palestinian public opinion, it is essential to demonstrate greater Palestinian unity. The Palestinian source believes that moving closer to Hamas would enhance the possibility of a new cycle of violence in the Gaza Strip and possibly also in the West Bank.

Speaking on condition of anonymity, the Palestinian source said that 2018 must be a year of decisions. “Either a realistic diplomatic route to statehood will be launched by the United States, or we will be forced to return sooner rather than later to an armed struggle for independence. Otherwise another decade will pass without Palestinian statehood, and we will be forgotten by the international community.” He then expressed Palestinian disappointment with the international community and the Arab world.

And so, the official, together with a group of Fatah members, is looking at an “intifada of independence” in 2018, 70 years after the creation of Israel. Still, he claims that Fatah does not want to have such a strategy imposed by Hamas or by outside players such as former Fatah senior member Mohammed Dahlan.

An intifada of independence in 2018 would take the form of an armed intifada against Israel with the endorsement of Hamas, in possible cooperation with Hezbollah and backed by inter-Arab public opinion. The official emphasized that such a violent campaign for independence would not take two to three months, but two to three years — a kind of war of attrition against the powerful Israeli army.

A senior Israeli Ministry of Foreign Affairs official confirmed that Abbas’ entourage is sending its Arab partners signals of despair over the US decision on Jerusalem and the end of any foreseeable two-state solution process. According to Israeli analysis, Hamas and Fatah are both in a crisis over these recent events. Given the humanitarian disaster in Gaza, Hamas is now working to strengthen its hold in the West Bank and incite violence. Hamas has also been allowing the more radical organizations in the Gaza Strip a free hand to some extent in firing rockets against Israel. Israel has warned both Abbas and Hamas that it will use a strong hand against any violence.

In the longer run, the senior Israeli official believes that Abbas’ regime is dependent on security cooperation with Israel for its survival. He does not take the talks of an independence intifada next year seriously; the Palestinians are far too preoccupied with their internal bickering, he said.

The Israeli official’s usual self-confidence, reflecting Prime Minister Benjamin Netanyahu’s state of mind since the Jerusalem proclamation, might be misplaced. The Palestinian leadership feels really cornered by the international community and to some degree by their Arab partners as well. At some point, the accumulation of such feelings would compel elements in Fatah to push for violent resistance, i.e., a third intifada, and a greater unity with Hamas is definitely possible. Violence generally breaks out as a surprise. The only way to prevent such a surprise is by deploying a serious diplomatic effort for a two-state solution.