While Reformists have been on the sidelines of recent protests in Iran, a number of prominent Reformist leaders recently expressed their support for the right to protest, yet condemned the violence. 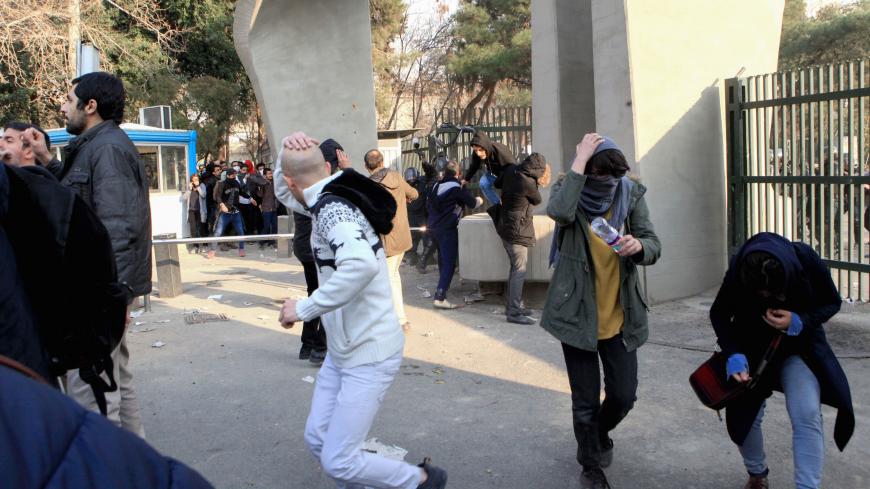 Iranian students run for cover from tear gas at the University of Tehran during a demonstration driven by anger over economic problems, in the capital, Tehran, Iran, Dec. 30, 2017. - STR/AFP/Getty Images

One notable absence in Iran’s current protests has been the lack of Reformist support. Iran’s last two major protests, the student protests of 1999 and the election protests of 2009, were both supported by Reformist figures. Having lost a great deal of political ground in each street protest, Reformists are naturally wary of the effectiveness of such demonstrations and of how the protests could spill over into violence.

In a statement signed by 16 Reformist figures, it seems that at least some within the Reformist camp are attempting to get ahead of the protests that have so far not included them. The letter was signed by some of the more outspoken and influential Reformist figures, including Saeed Hajjarian, often referred to as the main Reformist theoretician, Mostafa Tajzadeh, Feizollah Arabsorkhi, and Mohammad Reza Khatami, a brother of former President Mohammad Khatami and former secretary-general of the Islamic Iran Participation Front, a one-time powerful Reformist group.

The statement read, “The discontent among the people continues and unless fundamental steps are taken to resolve the issues of the protests and the rightful complaints are not addressed appropriately, these events, with even more costs, will be repeated.” The statement continued, “The existing problems and discontent in society have various dimensions. A significant portion of the people are in pain over economic shortcomings, unemployment and low wages. Some are also protesting against political and social restrictions.”

The statement also addressed the role of elections in the protests: “The people have numerous times participated honestly and optimistically in elections and have given a stamp of constitutional and popular approval to the government but unfortunately a measured and timely response to their civic action was not given.”

The statement continued that the lack of institutions to resolve complaints and differences and that the lack of recognition of the legal right to protest has led to street protests and a continuation of protests. “We defend the right of citizens from any group to protest,” the statement read. It added that protests and expressing discontent are not a danger for the government but rather the danger is “hopelessness, lack of trust, anger and violence in place of … dialogue.” The statement also condemned violence, calling it a lose-lose situation, and any type of foreign interference.

Given that the Reformists were not originally part of the protests, did not originally express support for the protests and that through their support for President Hassan Rouhani at the least have a friendly ear within the administration, some Iranians on social media did not welcome the news of the Reformists' statement. Some criticized the statement for claiming that a vote gave legitimacy to the government when in fact some people vote simply between “bad and worse.” Others criticized the statement for not mentioning the 21 killed in the protests. Others on social media mentioned that while the 16 Reformists called for open dialogue and defended the protesters' rights, three of the signers had originally made critical comments about the protests.

The statement had also called for the release of university students who were arrested during the protests. While the students were not visibly part of the protests across the country this past week, dozens were reportedly arrested. Mohammad Rahbari, the secretary of the Islamic Association of Students, said Jan. 7 that a number of university students had already been released and they expect more to be released shortly. Rahbari said the university students arrested did not belong to any one single political group but that they are pursuing their cases with the universities, the Science Ministry and members of parliament.