Iranian Reformists lash out over Tillerson's hints at regime change

Iranian Reformists notably join hands in response to the Trump administration’s signals that it is reverting to a policy of regime change toward the Islamic Republic. 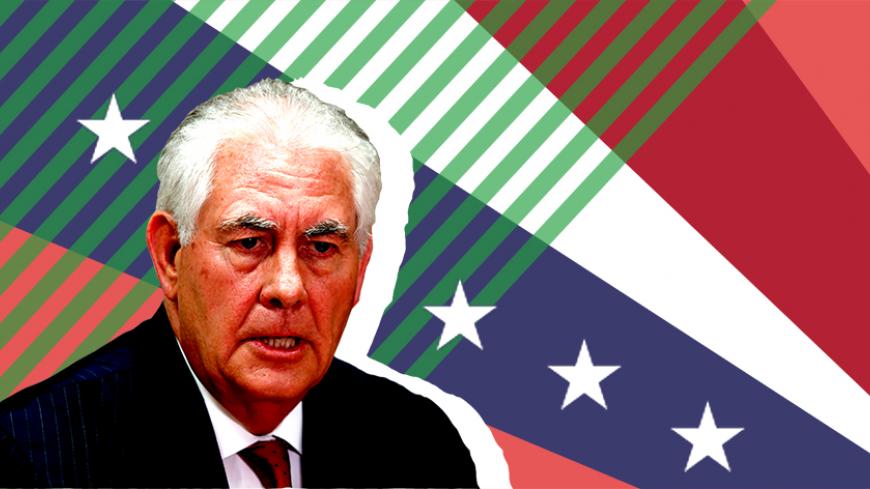 On June 14, US Secretary of State Rex Tillerson spoke of support for a “peaceful transition of government” in Iran, a controversial statement interpreted in Tehran as meaning that US policy is reverting to regime change.

Prominent Reformist figures, including those who have been imprisoned, protested the apparent new policy of the US government toward Iran. In a joint statement June 16, the Reformists condemned Tillerson’s announced posture and described it as “interventionist.”

The Reformist figures wrote in their statement: “Everybody is aware of the fact that the situation in the Middle East and North Africa is not only in a more dangerous situation than other parts of the world, but also that the region hasn’t faced such a big crisis in its history. Although an important part of the crisis is due to internal issues, and the weakness and lack of democratic and free governments in the region, one of the major causes of the crisis is the interference of foreigners, especially the US government. Contrary to its claim of defending human rights, Washington advocates for only the most reactionary countries in the region. Therefore it can be said that the roots of extremism in the region and the world are somehow influenced by their behavior.”

Referring to Tillerson’s recent remarks as “provocative” and “contrary to the legal and international rules,” the Reformists emphasized that "the results [of this rhetoric] are nothing except the increase of instability in the region, and [consequently] development of war and terrorism. … These statements are expressed while an overwhelming majority of people of Iran expressed their [views] by voting, and at the same time the White House is supporting the countries that are being governed wholly tyrannically [with the aim] of plundering the oil revenues of the region.”

Moreover, Mohammad Ali Abtahi, who served as vice president under the presidency of Reformist Mohammad Khatami (1997-2005), said June 15, “We should thank Mr. Tillerson, the US secretary of state. He has said that they are thinking about regime change in Iran. Now everyone in the world knows that Iranians have a unique unity in the face of foreigners’ threats. This unity is the necessity of our country and Tillersons’ remarks can contribute to that.”

Tajzadeh, a prominent Reformist who spent seven years in prison and was only released last year, tweeted June 19, “The bases of Trump’s presidency are so shaky that if he commits any unwise action against Iran, and we act wisely, it is likely that instead of the Islamic Republic, [Trump] himself will be overthrown.”

In response to the Reformists’ statement, conservatives have welcomed their position and contemplated it as a sign of unity in Iran. Seyyed Hossein Naghavi Hosseini, an ultra-conservative member of parliament, said June 18, “The point must be understood that in case of a threat against [our] national security, the new situation won’t distinguish between Reformists or conservatives. All of us will be involved in [such a crisis].”

Furthermore, the Reformists have also notably praised the Islamic Revolutionary Guards Corps (IRGC) for its June 18 missile attacks on Islamic State positions in Syria. The strikes came in apparent response to the June 7 terrorist attacks in Tehran, which left 18 people dead.

Abdollah Ramezanzadeh, who served as government spokesman under Khatami, said June 19, “The IRGC’s missile operation was legal, especially as it occurred in coordination with the neighboring countries, and in particular Syria.” He added, “This is considered a legitimate defense. Therefore, it seems to me that a proper operation has been done and that the country's power should be shown.”

Moreover, Ataollah Mohajerani, a former minister of culture and Islamic guidance who now lives in exile in London, tweeted June 19, “A missile attack on Daesh [Islamic State] in Deir ez-Zor is beyond attacking Daesh and taking revenge for the martyrs of the [June 7] terror operation in Tehran; This is a clear, strong and timely message to all.”