Reformists keep distance from unrest on streets of Iran

Reformists are keeping their distance from what is unfolding on the streets of Iran, reacting differently than they did during the protests following the disputed 2009 presidential elections. 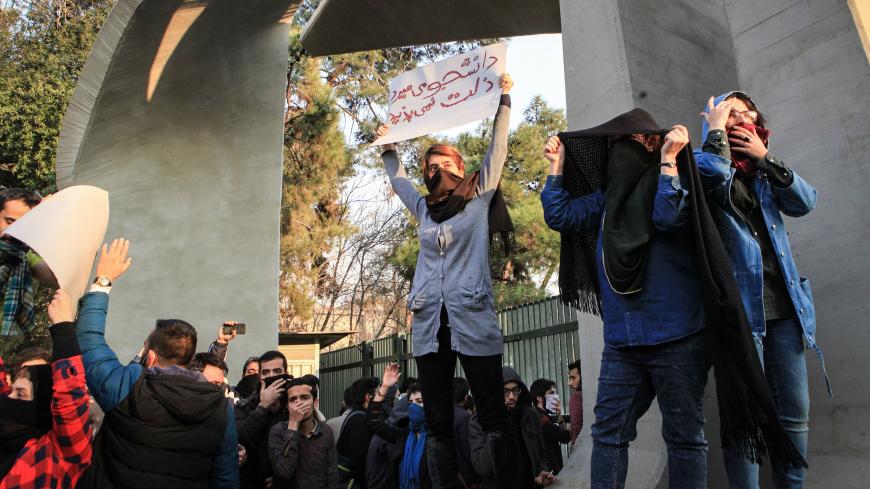 Iranian students protest at the University of Tehran during a demonstration driven by anger over economic problems, Tehran, Iran, Dec. 30, 2017. - STR/AFP/Getty Images

As protests continue in various Iranian cities, Reformists are asking people to show restraint in expressing their discontent. The protests, originally economic in nature and later expanded to include other grievances, have not been welcomed by Reformists inside Iran.

Having initially targeted the conduct of the executive branch, protesters gradually targeted other pillars of the establishment as verbal attacks against the Reformists and the person of the president subsided.

The protests started Dec. 28 in the northeastern cities of Mashhad and Neishabur; this led some analysts to suggest that President Hassan Rouhani’s main rival in the May 2017 elections, Ebrahim Raisi, and his father-in-law, Ahmad Alamolhoda, were behind the organization of these protests, with the aim of putting pressure on the administration. Raisi is the custodian of the Astan-e Quds Razavi charitable foundation in Mashhad, and his father-in-law is the Friday prayers leader there. The suggestion that Raisi and Alamolhoda were involved became more plausible when Iran's first vice president, Eshaq Jahangiri, said the protests were organized by those opposing the administration. On Dec. 29, Jahangiri said, "Some people are using the economy as means for attacking the administration. Something is going on behind the scenes and it needs to be identified."

A prominent Reformist member of parliament from Tehran, Mahmoud Sadeghi, had a different view when he wrote on Twitter the same day, "Even if these protests were pre-organized, it is still better for officials to try to find a solution to people's problems instead of looking for conspiracy theories."

While some Reformists blamed their Principlist rivals for the unrest and generally had a conspiracy-oriented view of what was happening, other Reformists defended the public's right to protest in the streets. Other Reformists claimed that the policies of Mahmoud Ahmadinejad during his 2005-13 presidency lie at the root of the current problems and social discontent. All of the Reformists, however, had one thing in common: They urged people to avoid violence while protesting.

Mostafa Tajzadeh, a Reformist politician and the head of the Election Office in President Mohammad Khatami's 1997-2005 administration, took to Twitter on Dec. 29 to defend the people's right to protest publicly, calling it an inalienable right of Iranian citizens guaranteed in Article 27 of the Iranian Constitution. However, as the protests escalated and became violent, more Reformists took to the public stage and condemned the violence.

On Dec. 30, Abdollah Ramezanzadeh, a government spokesman under Khatami, tweeted, “We can achieve prosperity and freedom through legal means and without violence.” The day before, prominent Reformist Mohammad Ali Abtahi, who served as Khatami's vice president, wrote on his Instagram account, “This is not about being a Reformist or a Principlist or anti-revolutionary. Everyone, from Ahmadinejad to members of the [hard-line] Endurance Front, to various websites and channels, to both supporters and opponents of Rouhani, all should know that stirring up social problems and encouraging street protests will be, more than anything else, to the detriment of the people who live inside Iran and have been tormented by discrimination, the economic situation and unemployment. If this situation continues, we will soon have a police state, there will be more economic hardship, and even the advantages and possibilities that are available today will no longer exist."

Although Reformists have accepted that difficulties do exist and have defended the people's right to protest in the streets, all also seem to believe that continuing the current path of protests is pointless and will only result in crippling the country and making the situation worse.

On Dec. 29, Hamidreza Jalaeipour, a prominent Reformist political analyst and university professor, wrote on his Telegram channel, "The Reformists were criticized for having encouraged the people to vote and were accused of only knowing how to bring people to voting booths. My answer is that we will continue to do the same thing. Voting is the civil and responsible thing to do. If we didn’t have informed participation in society, we would be worse off than Pakistan, Egypt and Syria. Let me frankly tell you that the Reformists do not look for the solutions to the problems of society in the streets.”

These reactions prompted some online users, especially those outside of Iran, to criticize the Reformists and call them opportunistic and power-hungry individuals who want to stay in power no matter what. However, the truth is that the Reformists’ ideology is in opposition to regime change and radical shifts. Just as the Reformists were not looking to overthrow the government following the disputed 2009 presidential elections and were only demanding the revocation of the election results, they are not looking for sudden and radical solutions today and instead prefer to solve challenges through gradual reform.

Saeed Laylaz, a leading Reformist political analyst and university professor, told Al-Monitor, “Although there are problems causing different crises in the country and difficulties for the people, we should remember that not all of these problems can be blamed on the administration since other institutions bear some responsibility as well. Additionally, these difficulties are no excuse for defending violence and chaos in the country.”

He added, “My personal analysis is that in the following days, more Reformist personalities will come forward in defense of the administration and will clarify their position regarding the protests, the right of the people to peaceful assembly and the necessity of avoiding violence. Reformist conduct is always in opposition to any violent movement.”

As such, it appears that Rouhani and his administration face a weighty task: controlling and stabilizing the country without using violence.

by Murielle KASPRZAK and Joseph SCHMID | AFP | May 26, 2022
END_OF_DOCUMENT_TOKEN_TO_BE_REPLACED