Protests in Iran unlikely to bring about change

Despite their sudden spread, protests in Iran are unlikely to instigate the change that demonstrators desire. 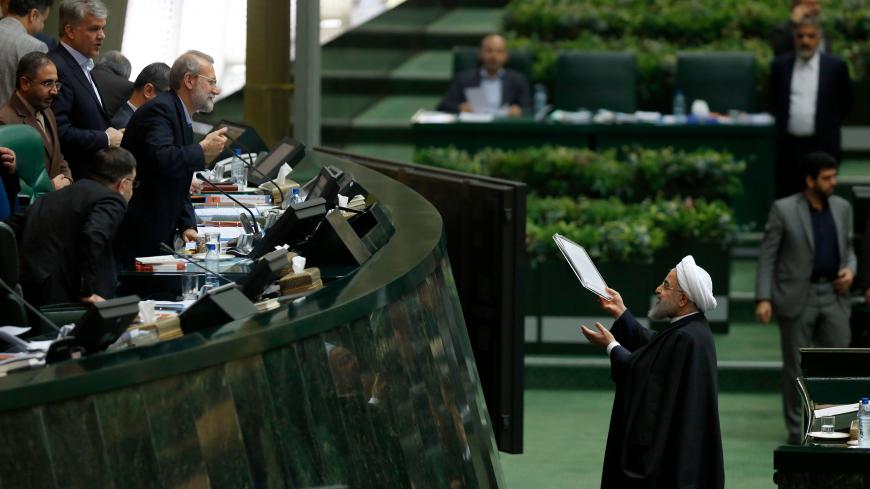 Following months of scattered, issue-specific protests across Iran over matters such as unpaid wages and lost deposits amid bankruptcies of unlicensed credit and financial institutions, the northeastern city of Mashhad saw protests on Dec. 28, mainly over “high prices,” with smaller rallies held in regional towns like Neyshabur and Birjand. The day after, similar protests were also held in other cities around the country. So far, the protests appear provincial: The security deputy of Tehran’s governor said fewer than 50 people gathered at a public square in the capital on Dec. 29.

Iranian authorities have stated that the protests were organized via the popular smartphone app Telegram, pointing the finger at “counter-revolutionaries.” Meanwhile, the administration of President Hassan Rouhani believes that its conservative foes are the culprits behind the unrest.

It has not been lost on observers that the initial protests featured relatively rare chants, such as “Death to Rouhani.” Mashhad is home to conservative cleric Ebrahim Raisi, Rouhani’s main rival in the May 2017 presidential election, and Raisi’s father-in-law, radical cleric Ahmad Alamolhoda, who has defied governmental authority on matters such as the holding of concerts. In this vein, the protests erupted one day after the Tehran police chief announced, in a seismic policy shift, that women would no longer be arrested over “improper veiling” but rather sent to educational classes.

Referring to Rouhani’s conservative rivals, First Vice President Eshaq Jahangiri said, “When a social and political movement is launched on the streets, those who started it will not necessarily be able to control it in the end.” He added, “Those who are behind such events will burn their own fingers. They think they will hurt the government by doing so.”

Apart from targeting high prices, chants at the rallies have also included criticism of Iran’s involvement abroad. But these slogans are not new; they predate Iran’s involvement in Iraq and Syria. Such slogans also clash with surveys that show the Iranian public strongly supports the deployment of military personnel to aid the regime of Bashar al-Assad.

Thus, rather than focusing on the idea of a conservative ploy to undermine Rouhani or that foreign policy is the driver of discontent, one should perhaps focus on the main grievance of the protesters — namely, "high prices."

It is often assumed that low living standards and desperation will induce political mobilization. Yet protests are rarely triggered by the level of poverty in itself — namely, absolute poverty — but rather poverty on a relative contextual basis.

Enter the role of inflation. Theories such as the J-curve — which argue that “revolution is most likely to occur when a long period of rising expectations and gratifications is followed by a period during which gratifications … suddenly drop off while expectations … continue to rise” — seek to explain popular mobilization in the face of contemporary poverty by linking it to previous levels of wealth for the same group. Accordingly, “the majority of revolutionaries thus are likely to be poor people at loose ends who have made some progress toward a new and better life and see themselves now failing to do so.”

Here, the impact of oil price fluctuations on the shah’s regime is highly instructive. The shah’s vast, state-led development plans induced by the spike in oil revenue in the early 1970s radically increased money supply, causing spiraling inflation. Indeed, the average inflation between 1973 and 1977 was 15.66%, five times that of the preceding five-year period.

When oil prices receded between 1975 and 1979, Iran suddenly experienced an economic contraction that forced the government to cut down on services even as inflation remained high. Consequentially, the relative position of the working and middle classes in Iranian society remained static, with members of these key groups seeing their ambitions thwarted as inflation eradicated anticipated socio-economic gains. That the shah, through radical measures, managed to contain inflation in 1978, one year before his fall, was evidently too little too late. As such, applied in the Iranian context, the J-curve theorem explains the revolutionary potential and fermentation of political opposition as a result of thwarted expectations of continuing increases of living standards.

In post-revolutionary Iran, inflation has stubbornly remained in the double digits, with few exceptions. During the Iran-Iraq War, from 1980-88, inflation averaged 17.8%. In the subsequent reconstruction era, under then-President Akbar Hashemi Rafsanjani (1989-97), it averaged 25.28%, with a record peak of 49.4% in the Iranian year ending March 1996. Under Reformist President Mohammad Khatami (1997-2005), inflation was contained at an average of 15.76%. Then, under conservative President Mahmoud Ahmadinejad (2005-13) — who oversaw unprecedented oil revenues and a massive increase in money supply with his signature Mehr Housing Scheme, not to mention a 300% devaluation of the rial triggered by sanctions — inflation averaged 17.66%, peaking above 30% in his final year in office.

When Rouhani first took office in August 2013, annual inflation ran at 34.7%. Discounting this annus horribilis, Iran has experienced an average inflation of 11.9% since March 2014 — the lowest under any Iranian president. In the previous Iranian year ending March 20, 2017, it averaged 8.9%.

Yet while he has slashed inflation by 70% since taking office, living costs have still risen under Rouhani amid increased unemployment, which has particularly hit women, the young and the educated. Despite strong economic growth, joblessness is projected by the International Monetary Fund to remain around 12% in coming years, partly due to the large number of job market entrants, given Iran’s demographic profile. Bloomberg has an excellent graphic on the dynamic between the cut in inflation and the rising cost of living.

As such, inflation in itself is not likely to have ignited the protests in Iran. What should rather be considered is the element of thwarted expectations as a powerful and potentially motivating factor in the broader equation.

To reiterate, drastically reduced inflation and the return of economic growth under Rouhani have not yet translated into sufficient job creation. This has occurred in an environment where higher anticipations about the future are clashing with a reality in which the promised dividends of the nuclear deal — which while greatly strengthening state finances — have yet to trickle down to the average Iranian. If parliament passes the Rouhani administration’s proposed budget bill for the Iranian year beginning March 21, 2018, citizens will not only face the prospect of higher fuel costs but also potentially being cut off from monthly cash subsidy payments.

Despite these serious conundrums, both revolutionary theory and the Iranian experience show that although low living standards are a constant preoccupation, they are not a constant threat. Neither should socio-economic discontent be equated with effective political resistance. Without necessary resources to maintain autonomous collective organization(s) and form popular opposition that is channeled into effective political action, change remains a remote prospect. This is not to mention the absence of a forward-looking ideology that is understandable to the wider population, capable of providing a powerful alternative vision of societal order and narrative of state identity.

Lastly, it should be noted that the protests come on the eve of the ninth of Dey in the Iranian calendar, marked by conservatives as the day when supporters of the political establishment decisively put an end to the protests after the 2009 elections by coming out in force. It is certainly a curious time for Ayatollah Ali Khamenei to be reminded of which constituency is the "real" bedrock of the Islamic Republic in times of crisis. Conversely, it could also serve as a reminder that the faction that is willing to put its own interests ahead of those of the broader political establishment has run its course. Regardless of the latter, given the current circumstances and the socio-economic realities of contemporary Iran, it is only a matter of when, and not whether, the protests will end.