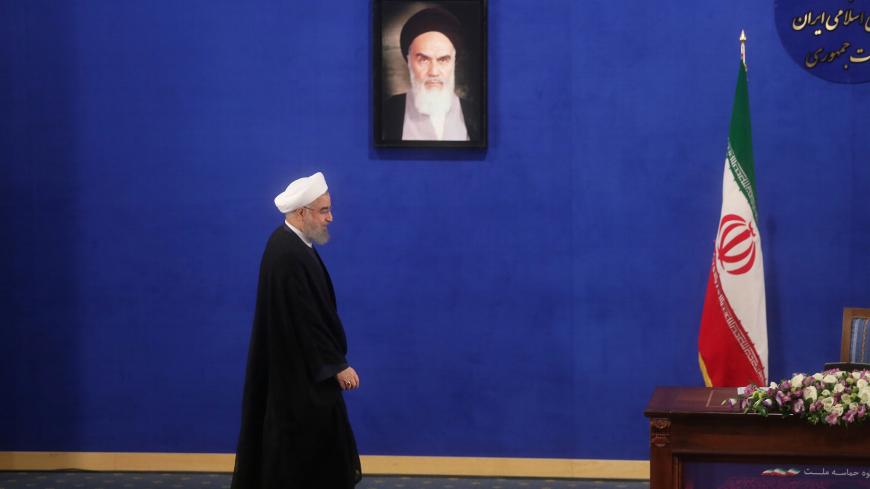 When Iranian President Hassan Rouhani presented his administration’s budget proposal on Dec. 10, he gave a controversial speech on the parliament floor about corruption, which many observers believe played a contributing factor to the protests that rocked Iran. While Rouhani may have hoped the speech would garner public support for his economic plan after parliament rejected his general budget proposal for 2018-19, it seems that the speech may actually backfire, causing the president to retreat on economic reforms, particularly those targeting subsidies.

Of the lawmakers that were present, 120 voted against the budget bill and 83 voted in favor. A joint commission will revise the budget outline. Parliamentary Speaker Ali Larijani gave the commission 72 hours to introduce a revised budget.

The parliamentarians objected to the budget’s proposal on eliminating cash handouts for 33 million Iranians, reducing gasoline subsidies, tax exemptions for low-wage earners and the “lack of attention for the livelihood of teachers.” Regarding the plan to eliminate 33 million Iranians from the cash subsidy payments, parliamentarian Mehrdad Lahooti, a member of the joint commission reviewing the budget, said that the mechanism to eliminate the cash handouts was not explained and this could have “negative consequences for the country.”

The parliamentarians who voted against the budget had expressed hope that the revised bill by the joint commission would address “employment, absolute poverty and resolving economic problems.”

Mohammad Bagher Nobakht, the head of the administration’s Planning and Budget Organization, defended the general budget proposal and criticized parliament’s rejection of it. “According to the law, the budget bill shows the country’s capacities in forecasting resources and expenditures,” Nobakht said. “It is not supposed to be a budget that is accountable for all of the country’s problems for the upcoming year.”

Nobakht asked, “What changes can take place in 72 hours?” He continued that even if parliamentarians wanted to change some of the figures of the budget, they could still have done so after approving the general budget.

The rejection of a general budget proposal is a rare event in Iran. As Nobakht noted, even if parliament had approved the general budget, they would still have the right to make fundamental changes on specific sections afterward. It is not an unlikely theory that the rejection by parliament can perhaps be a signal that there are political motivations behind it and an acknowledgement that the voices of protests have been heard, at least for those who had expressed economic concerns.

Rouhani swept into office in 2013 promising a nuclear deal, better relations with the world and an improved economy. The last campaign promise, a year into the president’s second term, so far has eluded this administration. Beyond the lifting of international sanctions through the nuclear deal and investment opportunities from Western European countries, Rouhani has also attempted to reform some of the economic decisions made by his predecessor, Mahmoud Ahmadinejad. Regardless of what changes the joint commission proposes, the Rouhani administration is now facing an uphill battle.