Why the Rouhani administration must eliminate energy subsidies

Despite pressure from lawmakers and the general public, the Rouhani administration must proceed with fuel-subsidy reform in order to relieve itself of avoidable financial burdens. 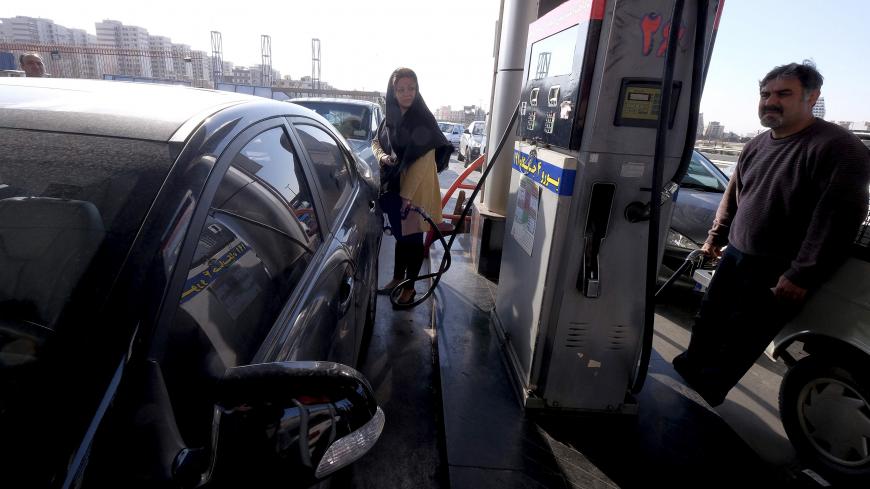 Iranians fill up their cars at a gas station in Tehran, Iran, Jan. 25, 2016. - REUTERS/Raheb Homavandi/TIMA

According to the latest figures from the Central Bank of Iran, the government’s budget deficit spiked by a whopping 105% in the first half of the current Iranian year (which began March 21) compared with the same period the previous year.

Part of the issue has to do with massive fuel subsidies. President Hassan Rouhani’s administration is now obliged to provide at least 180 trillion rials ($4.29 billion) in hidden subsidies to Iranian car owners until spring. But continuing the fuel subsidies appears even more unfeasible now that the United States has reimposed unilateral sanctions targeting Iran’s oil industry, banking system and other key sectors.

Oil sales contributed more than 37% of budget resources in the first half of the Iranian year.

The record budget gap has been coupled with major outbound fuel smuggling in the wake of the rial devaluation in recent months.

Daily gasoline consumption in Iran is almost 88 million liters (23 million US gallons). This is while fuel smuggling stands at between 20 million and 40 million liters (5.3 million to 10.6 million gallons) per day. The profit obtained from the illegal sale of each liter of gasoline is at least five times that fetched at pumps in the country. Thus, at the current rate, it is estimated that fuel smugglers alone pocket nearly 200 trillion rials ($4.76 billion) a year. This is just over half of the amount paid in monthly cash handouts to Iranians.

Half of Iranian households do not possess a car of their own. In other words, the lowest decile of households’ share of subsidized fuel is 1%, in stark contrast with that of the top decile, which benefits from 24% of the fuel subsidies.

With the removal of such untargeted subsidies, the government will be able to balance its revenues and spending with less hardship and break away from chronic annual budget gaps. Ideally, it could boost the livelihood of the underprivileged groups of society, transform the public transportation network, reduce the tax burden on businesses during the current unfavorable economic conditions and expand the country’s infrastructure. However, Rouhani faces a number of challenges in order to remove fuel subsidies.

First, there is opposition to energy-subsidy reform not just in some quarters of government ministries, but also in parliament. For instance, in September, member of parliament Fereydoun Hassanvand — head of parliament's Energy Commission — explicitly said parliament would not allow the government to raise gasoline prices. Reforming the energy subsidy system requires a genuine consensus among all the pillars of the state. On the one hand, some legislators see the reform of the subsidy system as merely equivalent to a rise in prices. On the other, they wrongly perceive that the only motivation behind such grand measures is to alleviate the financial burden on the government's budget. Hence, it leads them to the conclusion that the Rouhani administration intends to offset its budget problems by raising fuel prices. This is perceived as piling pressure on the public and thus their constituents — bearing in mind that parliamentary elections are due in 2020. Thus it is no secret that many members of parliament are at loggerheads with the scheme.

Second, there is a considerable amount of populist economic doctrines internalized in the Islamic Republic. This means that changes might come at a big cost as concern about the possible social and political consequences of such plans pushes top decision-makers to turn a blind eye to subsidy reforms. For quite a long time, Iranian governments have been accustomed to interfering in various economic spheres through price-control mechanisms. They have mostly failed to observe the critical role of pricing to allocate rare resources. In fact, every attempt has been made to curb inefficiencies by means of non-economic measures and a command economy. This has caused society to be told that any price spikes are preposterous. As such, it is only natural that the ruling system is now unable to act contrary to what it has long propagated.

Another issue of utmost significance is that people's perceptions of fuel-subsidy reform are likely to be based on their past experiences. The Iranian public has experienced rising fuel prices while not commensurately benefiting from such reform, as accompanying direct redistribution of resources via cash handouts has been inadequate given the loss of purchasing power due to inflation. Thus, in the eyes of many Iranians, fuel-subsidy reform is simply equivalent to price increases, making it likely that Iranians are generally not poised to be sympathetic to such scheme.

In this equation, it cannot be denied that the Rouhani administration has lost much of its credibility in the past few years, chiefly owing to its poor economic management. Nonetheless, it needs to redress energy subsidies and raise fuel prices to lower the pressure on its budget. Moreover, subsidy reform would be in line with the objectives of the Sixth Development Plan (2016-21), which projects that the implementation of such a scheme would only add a maximum of 2% to overall inflation. The latter is not a significant figure in terms of the advantages deemed for the lower wage-earners in Iran compared with the current rate of inflation of 35%, according to the Statistical Center of Iran.

All in all, it is vital for the Rouhani administration to strictly follow the guidelines of international agencies in order to achieve the objectives of the subsidy-reform program with relative success. To do so, it ought to implement a comprehensive corrective program to alter fuel prices, communicate changes more effectively to the general public, increase prices in a gradual manner, implement targeted measures to support vulnerable households and prevent the effective return of subsidies by designing a mechanism to regulate prices continuously.