Why Gaza merchants are forgiving debt

A new social campaign in the Gaza Strip encourages debt forgiveness in light of people's economic straits due to the 11-year blockade. 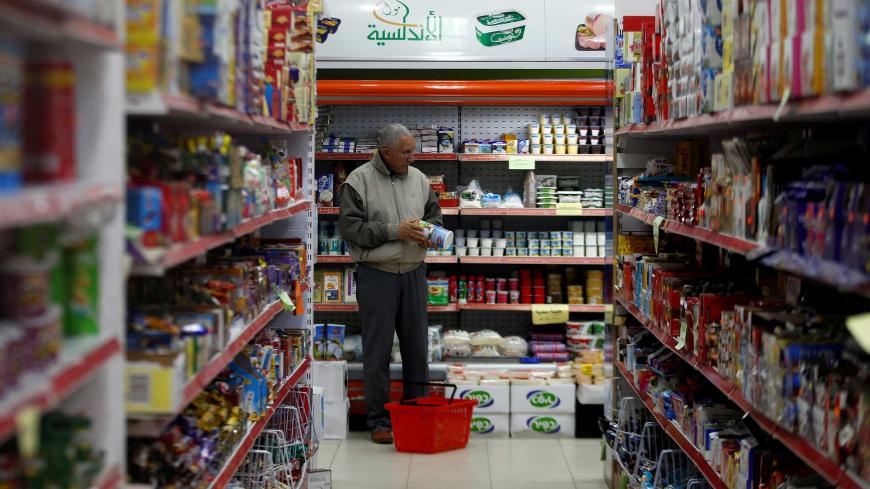 NUSEIRAT CAMP, Gaza Strip — Three hundred young men distributed 600 food packages to poor families in the five governorates of the Gaza Strip on Jan. 19 as part of “Sameh, Toujar” (Forgive and You Shall Receive), a campaign that started Jan. 1. The campaign launched when a group of activists decided to encourage merchants to drop the debt of Gaza residents unable to pay their bills due to the tough economic situation. Salary cuts and the Israeli blockade, ongoing for 11 years, have made life in Gaza difficult.

Campaign spokesman Wael Abu Mohsen, an independent journalist, told Al-Monitor, “The campaign started out unorganized, when Osama Abu Dalal, a 32-year-old owner of a shoe shop in the Gaza Strip, decided to scratch people’s debts during a conversation with a bunch of young social activists about helping the poor. We proposed that he post news about forgiving the debts on Facebook under the hashtag #Sameh_toujar — the campaign slogan.”

“Abu Dalal slashed around $30,000, and we were surprised after the hashtag came out to see lots of traders join the campaign. Many of them publicly forgave citizens their debts. Some merchants called us on the numbers we shared as the organizers of the campaign. They told of their participation on the condition of anonymity, hoping God would reward them.”

Abu Mohsen thinks the merchants’ sense of social responsibility and their voluntary participation in the campaign are the main reasons behind its success. The hashtag led trending in Gaza for three consecutive days. In addition to forgoing the debt of around 1,000 residents so far, the campaign has managed to reduce some legal and medical fees, as doctors and lawyers have gotten into the spirit. According to Abu Mohsen, some 70 merchants have slashed $350,000 in debt, and the amount is expected to rise as the campaign continues.

In short order, the campaign expanded to include providing aid to the needy. “The owners of restaurants and bakeries offered meals for poor families in Gaza, and many big stores fixed food baskets for the poor,” Abu Mohsen said. “During the first week of the campaign, around 400 food baskets were prepared. Therefore, it was essential to organize the campaign’s work. … We put together a group of 10 people to market for the campaign and document the contributions of merchants, doctors and lawyers.”

Abu Dalal told Al-Monitor that the idea to erase people's debt came to him after friends who owed him money began avoiding him. “While I was walking at noon along the beach to exercise, I saw many university students in al-Zahra returning home on foot. I think they could not afford the cost of transportation,” he said. “I felt a social responsibility toward them, and I had to do something. Waiving people’s debts was the only thing I could do, although I lost the savings I had accumulated from working since I was 16.”

He added, “Many traders from the West Bank contacted me to tell me that they had waived the debts that traders from Gaza owed them and that they supported the campaign and would take part. But they preferred not to give their names, because Islam rewards anonymity in good deeds immensely.”

Khaled Safi, social media coordinator of the campaign, told Al-Monitor, “With the quick succession of events, we were unable to communicate with all the participants, so we shared some initiatives under the hashtag #Sameh_toujar on the [campaign’s] Facebook page.”

He noted, “The campaign's main team consists of 10 people, but we also formed a WhatsApp group of 25 religious and media figures to consult about marketing for the campaign and keeping it on the right track. We formed five groups in the five provinces. Each group includes 60 young men and women, and there were 300 volunteers in the Gaza Strip working constantly to gather information about poor families who need help and to document the donations of medical centers, merchants and other donors.”

On Jan. 18, the volunteers provided food and clothing to 200 poor families in Rafah, in the south, and to 500 families in Jabaliya, in the north. “The campaign was widely covered by [local] media thanks to the organizers’ sharing on Facebook, Twitter and WhatsApp,” Safi said. “We are currently working on creating a website under the campaign’s name to document the donations and expenditure to ensure transparency with the public.”