Hamas-affiliated channel Al-Aqsa TV fears financial woes could force it to stop broadcasting for the first time since 2006. 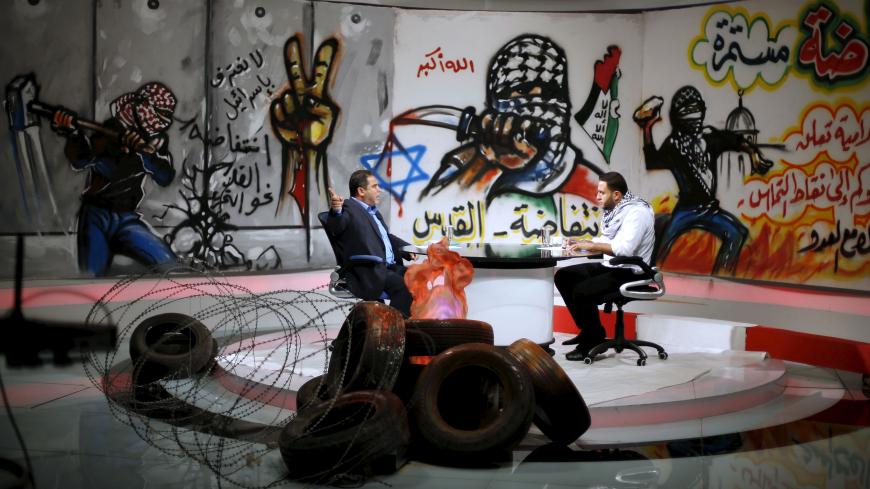 A last-minute, partial debt payment is keeping Hamas' broadcast wing in the Gaza Strip on air — for now — but the organization still faces a financial crisis that threatens what is left of its media assets.

Hamas’ financial woes have worsened in recent years for several reasons: declining Iranian support since 2012, Egypt's campaign to close off smuggling tunnels between Gaza and Sinai since 2013 and shrinking financial donations from abroad. This is all on top of the pressure that weighs on Hamas from the United States, Israel and some Arab countries that accuse the movement of funding terrorism.

The movement’s Al-Aqsa TV channel announced Dec. 19 that financial problems — compounded by Israel's devastating bombing Nov. 12 of the station's Gaza Strip headquarters — would drive it off the air for the first time since 2006. Prominent sources in Hamas told Al-Monitor that senior leaders then made some calls, after which Ismail Haniyeh, head of Hamas’ political bureau, announced Dec. 20 that the channel would not stop broadcasting after all, and that part of its $220,000 debt had been settled.

Al-Aqsa TV broadcasts from the Gaza Strip and has offices for its reporters in Lebanon and Jordan. The channel’s facility in the West Bank was closed in July amid the ongoing Palestinian division.

Essam al-Dalis, deputy head of Hamas’ political bureau, said in a Dec. 19 tweet that the movement should neither disappear from the television scene nor be silenced, despite its financial crisis.

Salama Maroof, head of Hamas' media office in Gaza, said in a Facebook post Dec. 20 that it's unfortunate that what Israel failed to achieve when it bombed A-Aqsa TV headquarters Nov. 12 almost happened anyway as a result of the financial crisis.

Also on Dec. 20, Alaa Rimawi, who was director of Al-Aqsa TV's office in the West Bank before Israel shut it down in July because of its affiliation with Hamas, said on his Facebook page that the channel doesn't represent a specific faction. Rather, he said, it embodies an entire political approach, which is why decision-makers need to do everything to keep it afloat.

Wesam Afifa, director general of Al-Aqsa TV, told Al-Monitor. “The most important aspect of the channel’s financial crisis is the accumulated debt of $220,000 in recent years, which includes the operational and broadcasting fees. Our 200 employees have only been receiving 50% of their salaries over the past year.”

Afifa added, “Perhaps the channel’s administration took longer than it should have to deal with the crisis. But we never expected the crisis to lead to this shocking announcement. [Some of] the channel’s $220,000 debt has been settled and the crisis partially averted. ... But a new year is starting and we need to pay what we already owe in order to sign new broadcasting deals, or the crisis will re-emerge in the coming weeks.”

Al-Aqsa TV receives a large part of its funding from Hamas’ budget, in addition to donations from Hamas supporters abroad like businessmen and traders. These contributors send money to the channel, on condition of anonymity and without revealing the amounts for fear of being pursued by Israel and the United States on charges of funding terrorism.

Al-Aqsa TV doesn't charge viewers subscription fees, and Palestinian companies refrain from running ads on its channels, also fearing the Palestinian Authority (PA) and Israel will accuse them of supporting terrorism. This makes the channel directly and clearly affected by Hamas’ financial crisis.

Hamas' inability to come up with $220,000 has people asking if perhaps the organization isn't properly distributing its few financial resources.

Although the channel is broadcasting, it has no permanent headquarters. The Israeli strikes in November caused $4.5 million in losses. The channel doesn't have enough funding to rebuild the headquarters, and for now is broadcasting from temporary offices in the Gaza Strip.

Hussam al-Dajani, a Hamas expert and political science professor at Ummah University in Gaza, told Al-Monitor, “Since Al-Aqsa TV spoke out about its financial crisis, it has received donations from inside and outside of Palestine. The exact amount received remains unknown, but it was enough to help it partially cover its losses. But the problem has yet to be completely fixed.”

The station has yet to cover the costs caused by the Israeli strike and must produce $220,000 more in the coming weeks to keep broadcasting in 2019.

Al-Quds TV, which is also affiliated with Hamas and broadcasts from Beirut, has been facing a similar crisis for two years. In recent months, Al-Quds TV had to let go dozens of its employees, who have been paid only intermittently, or not at all, for more than a year.

An official from Al-Quds TV told Al-Monitor on condition of anonymity, “The [Al-Quds] channel's crisis is related to Hamas’ financial problems. We owe millions of dollars in salaries and operational expenses. We can't replace our worn-out equipment and we don't have operational budgets.”

He added, “Al-Quds’ administration had to take pre-emptive measures and lay off some employees to save on salaries, restructure management and rationalize consumption.”

Just before Al-Aqsa TV announced it would have to go off the air, the Palestinian Center for Policy and Survey Research published a poll Dec. 18 saying the channel was the most-watched Palestinian channel, with viewership reaching 14%. It was followed by Maan, Felesteen and PalToday with 12% each.

Osama al-Ashqar, a Palestinian media expert based in Sudan, told Al-Monitor, “The financial crisis plaguing Hamas’ media institutions requires urgent action, such as merging large institutions, eliminating small ones, setting a unified budget for media institutions and refraining from establishing new ones until the crisis is over.”

Back when Hamas was well-off, before Israel imposed a siege on the Gaza Strip and the movement's financial sources dried up, Hamas built a comprehensive media network inside and outside the Palestinian territories. It had newspapers, radio stations, TV channels and news websites, all of which drained its budget. When the financial crisis hit, all its institutions, platforms and employees became an administrative and financial burden that Hamas couldn't shoulder.