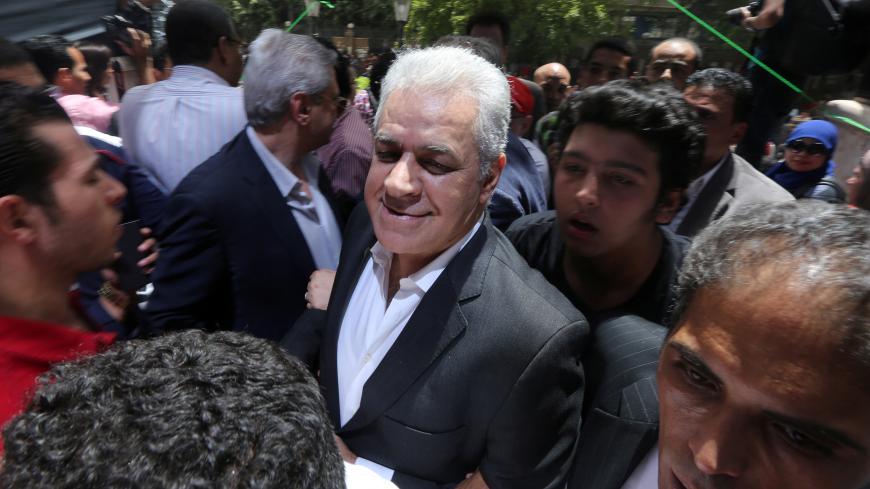 Former presidential candidate and leftist Hamdeen Sabahi is pictured during a protest against restrictions on the press and to demand the release of detained journalists, in front of the Press Syndicate, Cairo, Egypt, May 4, 2016. - REUTERS/Staff

A group of liberal and leftist Egyptian political parties and public figures recently formed a new movement designed to boost the circulation of a government gone stagnant. The movement wants to create political mobility, contribute to amendments to the protest law, improve access to the government and boost political influence for civil society groups and syndicates.

The Civil Democratic Movement is made up of seven liberal parties and about 150 public figures. On Dec. 14, they signed a declaration of principles that includes 11 objectives and demands.

The document calls for establishing the basics of a modern civil democracy, strictly applying the law and constitutional provisions to all people with no exceptions, and facing corruption by implementing the principles of transparency and supervision through elected local councils, independent media and supervisory agencies.

It also calls for "providing the minimum level of economic and social rights for ordinary citizens," adopting the scientific approach in determining priorities for the use of resources, and applying the rules of competitiveness "that prevent the encroachment of one institution or group over another.” The document also highlights the need to use intellectual as well as physical means to comprehensively confront terrorism. The new movement calls for the immediate release of all inmates who were imprisoned for expressing their opinions or staging peaceful demonstrations.

Ammar Ali Hassan, a writer and political analyst, said members launched the movement to pressure the country's leadership to introduce political, economic and security reforms, and to create political mobility that allows for fresh faces to guarantee the prevention of an authoritarian regime.

“Having the upcoming presidential elections around the corner was a very good opportunity for us to launch such a movement,” Hassan, who is a movement member, told Al-Monitor.

Egypt is gearing up to hold its presidential election in March and April. The National Elections Authority said it hasn't yet determined a specific schedule.

“Having the elections and [establishing the] movement at the same time [presents] an opportunity to re-engage Egyptians in political work after they have been avoiding it for a few years now,” Hassan said.

Egypt has long been under fire by human rights groups that accuse the country of abuses. Human Rights Watch released a report in September saying Egyptian authorities had perpetrated systematic torture in jails. The Egyptian Foreign Ministry bristled at the report, accusing the international group of defaming the country's reputation and disregarding the government's recent progress.

President Abdel Fattah al-Sisi continues to assert that Egypt is determined to foster human rights and guarantee more freedoms. At the World Youth Forum in Sharm el-Sheikh in November, Sisi also stressed the importance of confronting terrorism as terror violates human rights and attacks humanity. The forum, however, wound up providing a platform for a social media campaign highlighting the government's human rights abuses.

Abdel Gawad also said that the lack of a crackdown or negative reactions from the political leadership against this bloc to date may indicate the state is willing to foster political pluralism and open the way for more opposition parties. However, he added that it will be hard for such a political bloc to become an influential competitor in the coming presidential election since the political parties involved in the movement are very small. It's still a step in the right direction, he said.

“Political freedom or any other types of freedoms are hard to get established in any country. However, having opposition and political mobility is paramount to establishing a democracy that ensures basic rights for ordinary citizens and guarantees freedoms of expression and opinion,” he added.