Sisi launches academy to train Egypt's next generation of politicians

Egyptian President Abdel Fattah al-Sisi has established a national academy aimed at training young people to enter political life, but some are questioning the real intention. 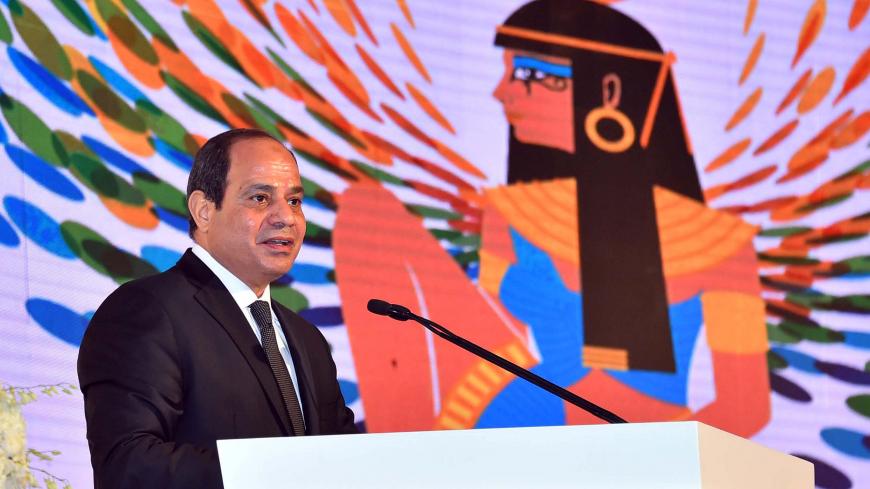 CAIRO — While Egypt's government argues that a newly established academy will boost the involvement of young people in the public domain, some worry it may be used as a tool to ensure loyalty to the regime.

President Abdel Fattah al-Sisi issued a decree setting up the National Academy to Train and Qualify Youth on Aug. 28, in line with recommendations put forward by participants in the first National Youth Conference in November 2016 in Sharm el-Sheikh.

The new academy, built in Giza's 6th of October City over an area of 10,000 square meters (107,600 square feet) with six buildings, is scheduled to start classes later this month. However, questions were raised about its goals as well as its political and public roles. Critics worry its intention is to ensure hegemony over young people to guarantee their loyalty to the regime in exchange for receiving leading positions.

The academy aims to enhance the participation in politics of Egyptian young people, who often abstain from participating in political life due to their lack of trust in the regime. The academy also seeks to prepare young Egyptians to occupy leading positions in the government.

“The academy is a demand of young people rather than a governmental order, especially since the young people who participated in the first youth conference in Sharm el-Sheikh in 2016 demanded that the president establish the academy. The government studied the demand before the president issued his decree in response to their request to establish it in 2017,” Tarek el-Khouly, the secretary of parliament’s Foreign Affairs Committee, told Al-Monitor.

The youth conference aims at opening direct dialogue between young Egyptians and representatives from the state and its various institutions under the sponsorship of Sisi.

Khouly saidt the academy’s objective is to fulfill the requirements of human development of young cadres in all sectors of the state as well as upgrade their skills to ready them for political action in the public domain, through creating a national incubator that consists of all political tendencies and independent movements.

Khouly said the mechanisms for selecting students are along the same lines as the Presidential Leadership Program (PLP). Sisi launched the PLP in September 2015, and under that program the first youth conference was held in October 2016. This conference is held every three months, and four have been convened. The PLP aims at preparing young aspiring leaders by providing academic lectures in political science, administrative sciences and social sciences.

The application process for the new academy includes an online application, taking a written test in Arabic and English and a personal interview with the assessment committee.

In selecting the teaching staff, the administration looked at all political tendencies, as this academy requires life experience; therefore, lecturers are public figures who are not obliged to hold a Ph.D. in a certain major, Khouly said.

Tarek Fahmy, a professor of political science at Cairo University and PLP lecturer, told Al-Monitor, “The academy is not an alternative to political parties, as parties already exist and will carry out their on-the-ground role according to the Political Parties’ Law without any interference whatsoever on the part of the state.”

Fahmy added that the academy is one of the fruits resulting from the PLP, which succeeded on many levels, such as providing a platform for direct dialogue between the state and thousands of young people, raising political and cultural awareness among the young generation and preparing thousands of young people to occupy leading positions. However, the PLP is of a temporary nature, while the Egyptian state needs a permanent organization to train young people to participate in politics. “General criteria and controls are set to select students, among which are excellence and competence in the majors offered by the academy. Students will study subjects such as citizenship, national awareness and human rights,” Khouly added.

Hassan Nafea, the head of the political science department at Cairo University, told Al-Monitor, “I do not believe in this academy or in its role, as it confuses the academic with the ideological. By attempting to control young people and create a young generation whose loyalty is to the president rather than the country, the state is going headlong in the wrong direction.”

“The place for professional and academic preparation in any major is specialized faculties. However, establishing an academy along the same lines of [former President Gamal Abdel] Nasser’s Socialist Vanguard [al-Tali'a al-Ishtiraki] and Gamal Mubarak’s Future Generation Foundation, which was Mubarak’s arm to control young people and guarantee their loyalty to pave the way for his reign, has proven to be a failure,” Nafea added.

Nafea said the place for political education is parties, and that opening the door for freedoms is what helps young people to rise as political leaders. However, putting them in a political mold preset by the state will only contribute to the political deadlock. According to Nafea, not announcing the criteria for enrolling students and teaching staff at the academy reflects how confused the academy is and how it lacks seriousness, as it is being used as a cover to circumvent the role of parties and nongovernmental organizations and take Egypt back to the 1960s.

Haitham el-Hariri, a member of parliament and a member of the 25-30 opposition bloc, told Al-Monitor, “The current political atmosphere is inconsistent with the idea. The main objective of the academy is to prepare young leaders who could lead the journey of our society in the years to come. However, the present inputs show that any young leaders with oppositional thought only belong behind bars and that there is no chance whatsoever for dissidents to breathe free air.”

According to Hariri, many young people with diverse opinions and demands have ended up in prison. “Former presidential candidate Khaled Ali was sentenced to three months in detention for committing ‘a crime against public morality’ because of his stance on the cause of the Tiran and Sanafir islands. Nubian young people were arrested during a singing march … to demand their rights to Nubian entitlements stated under the constitution — which acknowledge their rights to return to the banks of Lake Nasser. Syndicate members practicing their union duty, such as the Real Estate Taxes Syndicate and the Syndicate for Spinning and Weaving, were arrested. Young party leaders, such as the organization secretary in the Egyptian Social Democratic Party, Eslam Mar’ee, are imprisoned for fabricated charges as they went to prison for ‘posing on Facebook.’ Parliament members with oppositional voices were referred to the parliament’s ethics committee. Any citizen who holds an opinion or demands a right is welcome in prison,” Hariri explained.

“The Egyptian state is witnessing an unprecedented deterioration in freedoms such as nationalizing media while the regime’s men own private channels and any oppositional website is shut down, with 424 blocked so far. The cultural scene is being confiscated as El-Karama Libraries, which were founded by human rights activist and lawyer Gamal Eid, were closed, student union elections stopped, elections for heads of universities were canceled and, until this moment, no municipality election was held,” Hariri added.

“In principle, the idea is good. However, the problem is always with the practice that contradicts the essence of noble values,” Mohamed Anwar El-Sadat, the head of the Reform and Development Party, told Al-Monitor.

Sadat wondered, “Will there be diversity among the teaching staff members regardless of inclination, or will the staff consist solely of listen-and-obey pawns such as the case is with the rest of Egypt’s universities?”

Sadat asked if the selection of students would take place according to unbiased mechanisms that gather a wide diversit of young people, regardless of their political inclinations, or if the state would be satisfied with selecting only young people recommended by security agencies, as is currently the case.