A comment by Local Development Minister Abu Bakr al-Gendy concerning citizens of the Upper Egypt governorates has shone a light on the area's extreme poverty and highlighted the need to pursue economic development. 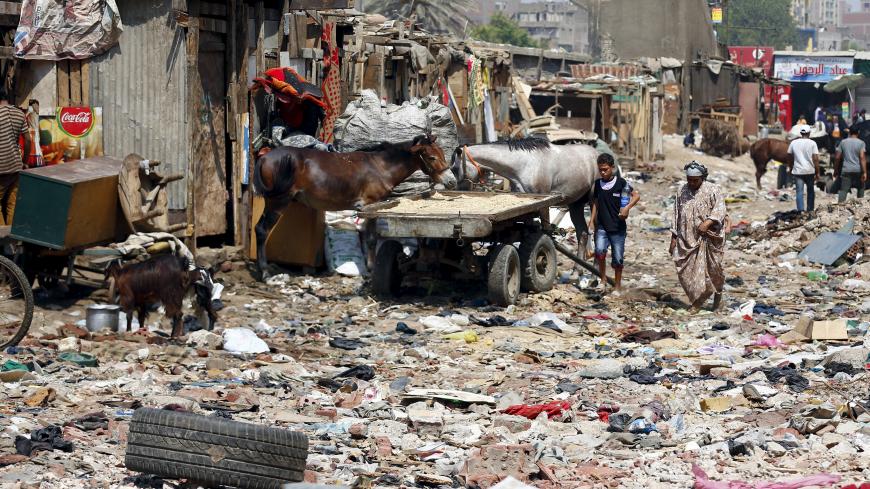 CAIRO — Underdevelopment and extreme poverty in Upper Egypt recently hit the headlines when a comment by Local Development Minister Abu Bakr al-Gendy sparked an outcry among Upper Egyptians. Speaking by phone on “Al-Hayat al-Youm” on Jan. 14, Gendy remarked on the need to “encourage investments in Upper Egypt that create job opportunities to stop Upper Egyptians from taking the train to Cairo, where they create slums.” Upper Egyptians were, as one might expect, offended.

Gendy apologized the following day on “Ala Masouliyati,” the talk show hosted by Sada al-Balad. He explained that what he meant was that by developing Upper Egypt governorates, residents would no longer be forced to migrate to Cairo in search of jobs. The controversy over his choice of words has ignited discussion about the economic situation in Upper Egypt — the location of 10 of Egypt’s 27 governorates — and the measures needed to improve life there.

According to a 2015 report by the Central Agency for Mobilization and Statistics (CAPMAS), the poverty rate in Upper Egypt exceeds 50%. The governorates have the highest level of internal and external migration amid a staggering 80% unemployment rate. During a CAPMAS event on Jan. 15, Gendy, who once led the agency, noted that only 12% of the villages have a sanitary sewage system.

Gendy then said in a Jan. 17 press statement that his ministry is finalizing a draft law to establish the South Upper Egypt Development Authority, in coordination with the Justice Ministry, with the goal of accelerating comprehensive economic, social and urban development in seven governorates extending from the Red Sea inland. To that end, the authority will be tasked with promoting investments and initiating developmental projects to generate high rates of employment. Gendy said the draft law is a ministry priority.

President Abdel-Fattah al-Sisi issued a decree dated July 24, 2017, establishing an economic zone for the Golden Triangle — the area on the Red Sea between Qusayr to the south, Safaga to the north and Qina to the west — to promote industrial, commercial, agricultural and tourism opportunities. The area is rich in mining resources, but the sector is poorly developed.

The Golden Triangle project is spread across 2.2 million feddan. The estimated total investment is about $16.5 billion, and the project is expected to create 350,000 jobs over 30 years.

Hamaky further remarked, “The development of human resources in Upper Egypt is crucial to combat unemployment. The new investment law [passed in June 2017], which allocates lands for free and provides for tax exemptions to investors, facilitates and encourages investment opportunities. Developing infrastructure and sanitation projects would also promote development in Upper Egypt, making it attractive for residents.”

Mustafa Salem, member of parliament from Sohag, told the newspaper Youm7 on Jan. 16, “Upper Egypt’s development plan must focus on major industrial projects, so as to create new jobs. Works should be completed to improve sanitation and potable water systems. Road networks should also be developed, whether agricultural roads or internal roads linking the villages and different centers.”

Within the scope of the state’s development efforts in Upper Egypt, the Ministry of Planning, Monitoring and Administrative Reform on Dec. 20 announced on Facebook its plans to launch a series of development projects in January. The projects were to focus on developing sewage systems, roads, drinking water supplies, industrial zones and technological infrastructure services. Phase one will kick off in the Sohag and Qena governorates.

Member of parliament Mustafa Bakri acknowledged that the necessary development in Upper Egypt will require substantial financial support. “This may be one of the challenges hindering development plans,” he said.

Also in regard to factors potentially affecting implementation of the government's development strategies, Hamaky pointed to the inefficiency of government bodies, lack of coordination with civil society, and corruption in public institutions. She also noted, “Post-implementation supervision is also required by the government or by parliamentary committees.”

Rashad Abdo, economic expert and head of the Egyptian Forum for Political and Economic Studies, said that development in Upper Egypt will increase the country's gross domestic product. “But achieving development requires local government officials being backed by the economic expertise and political will,” he told Al-Monitor. “Human assets must be properly exploited to shift from a consuming force to a productive force.”

Abdo also stressed the need to employ the competitive advantage of each region in Egypt, as recommended by the World Trade Organization. “The state must help various local industries, especially small-sized industries and handicrafts,” he said. “Households should also be encouraged to be productive.”

“The state ought to organize exhibitions and market local products,” Abdo further suggested. “Many people like handicrafts and will buy them at high prices. The state should also develop the basic infrastructure [e.g., buildings, roads, power supplies] in Upper Egypt needed to attract investors.”