Putin's visit to Egypt inspires hope for growth in Cairo

Egypt could be seeing the revival of an otherwise lackluster alliance with Russia, a potential relationship that has much to offer both sides. 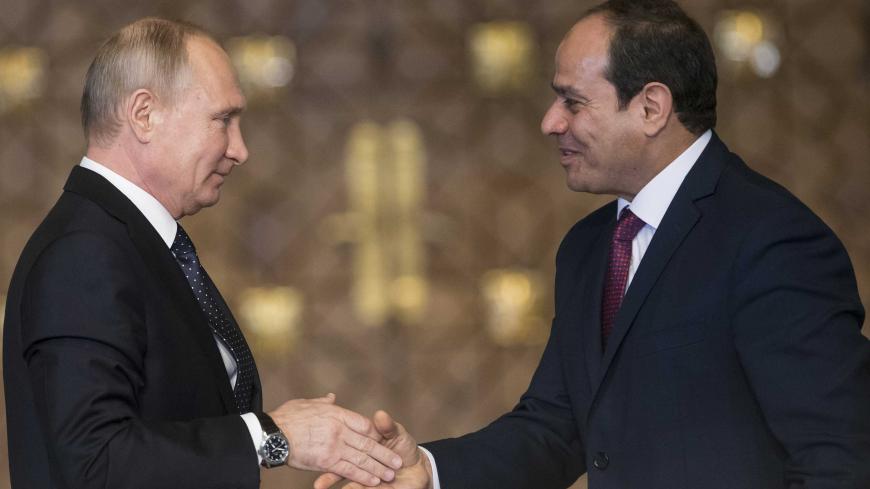 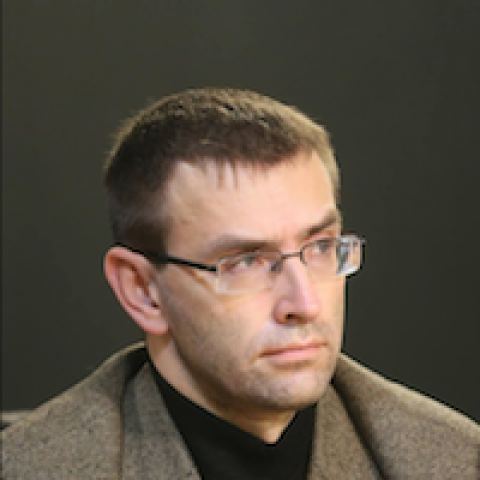 On Dec. 11, Russian President Vladimir Putin completed a diplomatic sprint, touring Syria, Egypt and Turkey in just one day. While the latter two visits were announced by the Kremlin beforehand, his detour to the Russian air base in Syria’s Khmeimim was a surprise to the public, for security reasons. In Syria, Putin ordered the partial drawdown of Russian troops and, together with Syrian President Bashar al-Assad, attended a military parade.

"You are coming home to your families with victory. The Motherland is waiting for you, friends! Thank you for your service!" Putin said, addressing the troops. “Should terrorists rise up in Syria again, we'll deliver strikes they have never seen."

Putin then headed to Cairo, where he was met at the airport by Egyptian President Abdel Fattah al-Sisi. On Nov. 28, Russian Prime Minister Dmitry Medvedev had approved an agreement with Egypt on use of the airspace and airport infrastructure of both countries, raising speculation that Russia plans to lease Egyptian air bases.

That possibility was first mentioned in 2013 when numerous sources said Egypt was willing to provide the Port Said and Suez navy bases for Russia's temporary use.

In 2016, Moscow said it might return to Sidi Barrani, another Egyptian military base on the Mediterranean. Until 1972, this base had been used by the Soviet Union to monitor NATO naval actions in the region; now Russia eyes using it mostly for air force operations. Last year, the Izvestia newspaper cited a source in the Russian Defense Ministry who claimed Cairo was ready to lease Sidi Barrani for a permanent Russian military contingent. Even if that were to materialize, the base needs to be modernized and couldn't be ready before 2019, the paper said. Officials in Moscow insisted, however, that Russia’s military presence was needed because of counterterrorist operations and would help stabilize North Africa.

Indeed, now that Russia sees itself as victorious over the Islamic State (IS) in Syria, helping Cairo battle terrorists in Sinai may become a pillar of Russian-Egyptian security cooperation. In October 2015, an IS affiliate in Egypt claimed responsibility for bombing a Russian tourist plane, killing more than 200 people. The attack ruptured direct air connection between Russia and Egypt for more than two years.

The agreement regarding airspace and airports that Medvedev approved was made around the same time Russian Defense Minister Sergei Shoigu was visiting Egypt and just days after the country suffered a terrorist attack Nov. 24 at a Sinai mosque that killed more than 300 people.

The first order of business when Putin arrived in Cairo and sat down with Sisi was the Syria settlement. Putin praised Sisi for his active support of the Syrian National Dialogue Congress (a Russian initiative that recently was postponed until February) and said he appreciates Egypt’s contribution to the Syrian peace process by helping to form the “Cairo group” — an umbrella group predominantly representing Kurdish opposition groups in Syria. In return, Sisi emphasized the inclusiveness of the Russian approach to forming such an opposition group.

Bilateral trade and economy came up second in their discussion. The annual trade turnover between Russia and Egypt stands at $4 billion and Cairo is very interested in attracting new Russian investments. Putin and Sisi even discussed creating an industrial zone in Egypt with “favorable conditions for the Russian businesses.” The jewel in the crown of that part of the talks was a two-part agreement: construction of Egypt's first nuclear power plant, under a $30 billion contract with Russia's Rosatom. The Russian government has offered a $25 billion loan for the project. The second part of the agreement holds that Russia will supply the fuel for the plant. This deal is the latest deal in Russia's “nuclear diplomacy" project, which includes plants in Iran, Turkey, Sudan and Jordan.

Restoring flights was also on the meeting agenda. “Egypt has done a great job in making airport security more effective," Putin told the media after the meeting. "Russian security services reported that on the whole we are ready to restore such connection between Moscow and Cairo. First there should be an intergovernmental agreement signed, but we are seeking to do that shortly.” Flights to Egyptian resort areas will still be restricted for now.

Regarding US President Donald Trump's decision to recognize Jerusalem as the capital of Israel, both Putin and Sisi agreed that such a move “impedes efforts for setting up direct talks between Palestinians and Israelis, while the issue should be solved within the framework of the international law and on the basis of respective UNSC [UN Security Council] resolutions.”

After all these topics were addressed, one subject was noticeably missing: There was no announcement of an actual Russian military presence in Egypt. Yet, such a presence would be logical, given the legal agreements and Moscow’s outreach to the region. To further strengthen its position in the Middle East, Russia needs to guarantee its influence not only on the Asian, but also on the African frontier.

Russia believes the bases in Syria are both crucial but vulnerable. To counter this vulnerability, Moscow needs backup military plans to support its communications and logistics.

For Cairo, Russia's return is a matter of prestige. As some Egyptian journalists have pointed out, “When the USSR left Egypt, it deeply injured the country’s dignity. President Vladimir Putin hopes to wipe out that episode from the memories [of Egyptians] by reviving Russian bases in Egypt, which also looks like a victory over the US.” Even if this is a debatable premise, Russia's very presence would be impressive.

Among other potential reasons for Moscow to want some form of military engagement in the country are Russian interests in Libya. Russia has occasionally used Egyptian territory to support Gen. Khalifa Hifter, the rival of internationally recognized Libyan Prime Minister Fayez al-Sarraj. The Sidi Barrani base, which is a mere 100 kilometers (62 miles) from the Libyan border, is perfectly suitable for this and other activities.

Should Russia expand its military presence in the region, Europeans may fear their own strategic interests might be endangered, considering that Moscow could situate its main power close to the Suez Canal — the EU’s “bloodstream,” carrying major amounts of oil and gas consumed in Europe.

These fears are further supported by recent “confidential” negotiations between Putin and Sudanese President Omar al-Bashir — who is wanted by the Hague Tribunal for alleged war crimes —over the prospects of hosting a Russian military base on the Red Sea.

Though some fear Russia's potential return to Egypt could signal Moscow's intent to start a full-blown military intervention in the region, Cairo sees Moscow’s moves mostly as an attempt to create political hype.

Cairo believes Russia plans to confuse Western politicians and turn their attention away from Sisi and "his failures in internal policy, which corrupt his image.” Following this logic, Sisi invites Moscow to help solve Egypt’s challenges in the Sinai and help resolve the Libyan crisis, both of which have become key aspects of his agenda, considering the threat of Islamic radicals.

In any case, this kind of cooperation gives Russia more opportunities to develop its presence in the Middle East and opens prospects for military-technical collaboration between the countries, which was curbed in the 1970s when Egypt shifted to the American sphere of influence.

While Egypt is struggling economically and depends on Saudi Arabia for financial help, Russia is probably going to provide Cairo with some arms in exchange for using the military bases. In 2014, Egypt agreed to buy from Russia $3.5 billion worth of artillery systems, firearms and air-defense units. The parties also negotiated Egypt's purchase of Ka-52K naval helicopters (as equipment for Mistral helicopter carriers), Ka-50 combat helicopters and a large installment (46 items) of Su-34 and MiG-29M aircraft. Egypt’s interest in purchasing this weaponry is mostly based on its will to pressure Ethiopia, which is building a dam on the Blue Nile that is likely to endanger Egypt's freshwater supply.

For Putin, the visit to Egypt was the second stop in his shuttle diplomacy across the region. But for Cairo, the meeting could mean much more, perhaps signaling that Russian-Egyptian cooperation may just be on its way up to a new level. 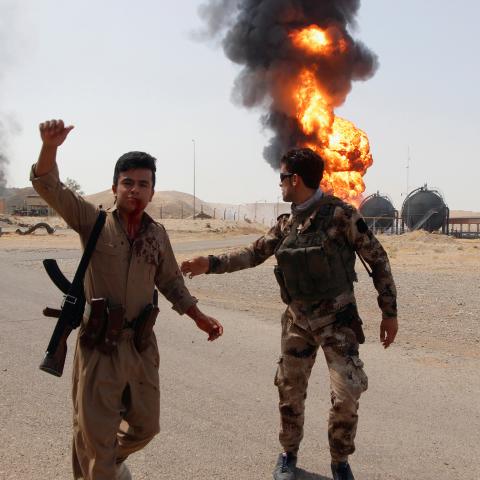