Moscow and Cairo signed a strategic cooperation agreement that is supposed to open new venues for bilateral relations in the military, political and cultural domains. 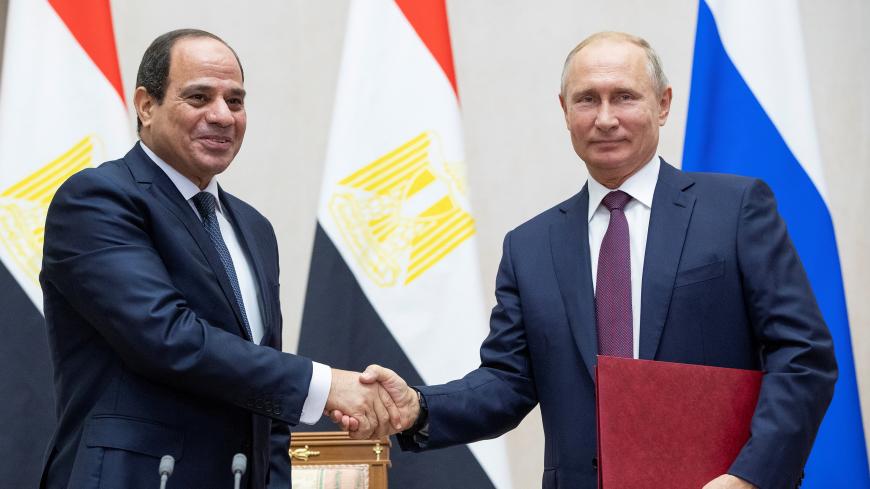 On Oct. 17, Russian and Egyptian Presidents Vladimir Putin and Abdel Fattah al-Sisi signed a bilateral agreement on comprehensive partnership and strategic cooperation. An initiative to declare 2020 a Year of Humanitarian Partnership was also approved.

These are basically the only publicly known results of the talks between the leaders of two nations, held for the eighth time in the last four years. The event demonstrated that the statements about friendship and partnership stem from practical actions — a good way to commemorate the 75th anniversary of diplomatic relations between Russia and Egypt, which is commemorated this year.

According to Putin, the relations between the two nations “are friendly and mutually beneficial in nature.” Sisi, for his part, pointed out that the conclusion of the partnership agreement would turn a page in the history of bilateral relations, “ensure their long-term prospects and open new horizons.”

The visit by the Egyptian president to Russia lasted three days. It officially started in Moscow, when Sisi delivered a speech at the Federation Council — Russia's senate — and met with Russian Prime Minister Dmitry Medvedev. Later, the Egyptian president went to Sochi, where Putin first took him to dinner at a waterfront restaurant and hosted official negotiations the next day.

However, due to the mass shooting at a college in Kerch, a town in Crimea, where more than 20 people were killed, the agenda was changed — the expanded meeting and a formal dinner with a concert were canceled.

Nevertheless, the presidents managed to touch upon all the issues that were originally scheduled on the agenda.

Their final press conference only lasted for 15 minutes. The points they made for the most part overlapped; however, each leader emphasized his own vision of them. Putin started by mentioning a 62% increase in the trade between Russia and Egypt, achieved in 2017. Trade amounted to $6.7 billion — Russia’s highest within the Middle East save for Turkey.

By comparison, trade between Russia and Iraq in 2017 was $1.4 billion, while trade with Israel was $2.4 billion. Still, all these figures are overshadowed by Russian-Turkish trade of $21.6 billion.

Trade with Egypt continues to expand — from January to August, it increased 28% compared with the same period last year, mostly due to Russia’s export of wheat, vegetable oil, vehicles and equipment. The increase in Russian imports from Egypt mostly comes from potatoes.

Putin said growth could be expanded further when Egypt signs an agreement on free trade with the Eurasian Economic Union — likely in 2019.

The Russian president also mentioned a significant contract signed in late September between the Russian-Hungarian consortium Transmashholding-Hungary Kft. and Egypt. It amounts to more than 1 billion euros ($1.15 billion) and calls for 1,300 railway passenger carriages to be supplied to Egypt in five years. This would be the largest project in the history of the Egyptian National Railways, both in terms of funding and of the quantity of product.

Amr Shaat, the deputy transport minister for Egypt, told RIA Novosti that Cairo has offered to allow a Russian company to construct a carriage factory in Egypt and later export the cars to third countries. Shaat said the factory could be built in the Russian industrial zone near the Suez Channel or elsewhere.

The possible creation of an industrial and logistical zone on 500 hectares (1,235 acres) near the Suez Channel, where instrument, wood-processing and pharmaceutical factories would be constructed, and the building of the El Dabaa nuclear plant are Russia’s largest and most long-term projects in Egypt and were mentioned by both presidents.

The construction plan for the nuclear plant has already been drawn up and agreed upon. Four units of the facility are supposed to be built by 2028-2029, and the funding will be from $21 billion to $26 billion, according to various sources. The contract on fuel may amount to $15 billion. The Rosatom company is to hire Egyptian subcontractors by the end of the year.

The situation involving the industrial zone is much more complex. This project is called “doubtful,” according to a number of sources in Russian business structures, who informed Al-Monitor that the companies willing to establish their presence in Egypt are still unknown. Expenses would be high, and the distribution scale is not guaranteed, although the Egyptian market, as well as the markets of African, Middle Eastern and European countries with which Cairo has concluded free trade agreements, are rather appealing for Russian entrepreneurs. However, as those whom Al-Monitor interviewed emphasized, Russian corporations still have not mastered seeking outlet markets and are more interested in government contracts, which Cairo is not willing to provide. Thus, many business people in Russia are certain that the industrial zone is mainly a political issue.

Nevertheless, the creators of the project insist that Russian companies ready to develop their export potential would eventually discover benefits from the zone. Russia became actively engaged in the design of this project around two years ago, simultaneously with Germany. However, the Germans had already started to construct their first buildings while Russians were still stuck at the point of budget alignment and debates over the structures that would work on the project and the format of their functioning. The bureaucratic delays are mostly due to Russia’s lack of experience in such projects and absence of approved scenarios. However, the creators of the project are certain that the industrial zone will start to function, even if it takes five to seven years. According to Putin, the zone is supposed to attract investments amounting to up to $7 billion and provide more than 35,000 workplaces.

An issue that has been casting a shadow on Russian-Egyptian relations is a lag in the restoration of direct flights between Russian cities and Egyptian Red Sea resorts. In April, direct transportation was re-established between Moscow and Cairo; however, flights to resort areas remain halted following the bombing that downed a Russia passenger plane over Sinai three years ago. Currently, Moscow plans to send an inspection commission to Egypt to check the safety and security level there. “It should be noted that our Egyptian friends are doing everything needed to improve security in the airports. We aim to re-establish charter flights on these routes in the nearest future,” Putin said, not mentioning any specific dates.

Contrary to the Russian leader, Sisi highlighted the political aspect of cooperation and a common vision of regional problems. He started his speech with a review of the situation in Syria and the conflict between Palestine and Israel; however, it was obvious that his main concern is the problem of Libya, which he discussed in detail. “I shared Egypt’s vision of political resolution in Libya with President Putin, as well as informing him of Cairo’s efforts to unite the Libyan National Army and allow it to efficiently achieve its objectives,” Sisi said. Sisi said the consequences of recent confrontation in Tripoli were also discussed. “The fighting demonstrated that relying on armed groups in the questions of security is dangerous and risky. … We are certain that this task should be delegated exclusively to the regular army, law enforcement and security services,” Sisi said, showing how Cairo supports Libyan military strongman Khalifa Hifter, while avoiding naming him directly.

It was Cairo that lobbied for Hifter’s cooperation with Russia. However, recently Moscow has paid more attention to the administration in Tripoli. Russian diplomats, however, emphasize that they attempt to maintain relationships with all sides of the conflict.

Discussing cooperation in the resolution of regional problems, Putin highlighted the situation in Syria in general and the issue of Idlib in particular. “We agreed that the state of affairs in this province requires special attention, due to the concentration of a large number of radical militants in the de-escalation zone there. The danger of the spread of terrorism to neighboring countries is very real. We have informed our Egyptian friends about the principles forming the foundation of our agreements we concluded with Turkey to solve this problem,” Putin said.

To sum up, he said, “The negotiations proved that Russia and Egypt have close or common positions on crucial issues of the region and the world.” The agenda of the talks also included the issues of Russian-Egyptian cooperation in the fight against terrorism and military-technical trade. According to the Stockholm International Peace Research Institute, 21% of weapons for the Egyptian army were supplied by Russia in 2013-2017 (weapons bought from the United States amounted to 26%). Moreover, the nations hold joint military exercises every year; one of them is currently being conducted in Egypt.

As a conclusion to the meeting, the presidents visited the Sochi Autodrom where, among other events, the Formula 1 Grand Prix of Russia is held. To travel to the racetrack, they took a ride in the Aurus king-size limousine — a car that Denis Manturov, Russian industry and commerce minister, officially presented among other luxury models designed and made in Russia. This project is dedicated to the development of a product line of cars, supposed to be used as service vehicles for state officials, as well as sold commercially. A limousine of this type was used by Putin for the first time during his inauguration ceremony on May 7; it is possible that some of the Aurus cars will be seen in Egypt in the near future.