Egypt turns to Russia to save decaying railway authority

Russia is cooperating with Egypt on developing the Egyptian Railway Authority, which has suffered heavy financial losses. 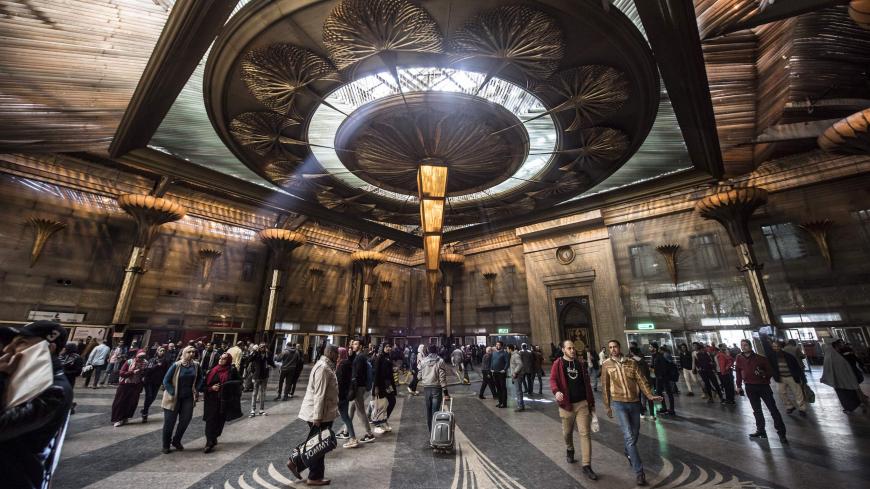 Egypt has recently signed a series of deals with Russia with the aim to develop its railway network.

On Oct. 8, director of the Egyptian Railway Authority (ERA) Ashraf Raslan announced the addition of a number of new Russian train carriages supplied to Egypt as well as the start of a study on railway traffic and the provision of services to students.

On Sept. 26, Egyptian Minister of Transport Maj. Gen. Kamel al-Wazir announced the arrival of 22 passenger carriages from Russia, saying, “The total of 103 vehicles that have arrived so far is part of a deal to manufacture and supply 1,300 new passenger carriages.”

The Egyptian-Russian deal to supply train carriages dates back to October 2018, when ERA in Cairo signed an agreement with the Russian-Hungarian industrial group Transmashholding that included the delivery of 1,300 carriages to Egypt, in addition to the establishment of the first production line for the manufacture of carriages in Egypt.

In December 2019, the Russian Export Center announced that Russian banks will offer loans to Egypt to fund the deal, whose cost is estimated at around 1 billion euros ($1.16 billion).

The Egyptian-Russian cooperation in the railway sector was also evident in other deals, including one to establish new railroad tracks in Egypt. On Sept. 17, state-owned Russian Railways announced that it intends to build two systems of tracks in Egypt at a cost of approximately $900 million. Sergey Pavlov, a director of Russian Railways, said in a press statement, “The first track is the Manashi-6th of October track, with a length of 70 kilometers [43 miles] and a cost of about $300 million, and the second is Imbabah-Alexandria track with a length of 270 kilometers [170 miles], and its cost is estimated at $600 million.”

He said, “The company's projects in Egypt have slowed down due to COVID-19,” adding, “Our employees are already there and they are examining the location of projects in Egypt. We had planned to start working in January, yet due to the quarantine and the closure of the borders, it was impossible to do so, but our work has just kicked off.”

Egypt and Russia had also signed a series of cooperation protocols with the aim to develop the railway network. In October 2019, Egypt signed a protocol of intent with Russian Railways on cooperation agreements in railway infrastructure. The protocol calls for the establishment of double railway tracks, in addition to establishing a main railway control center in Egypt, similarly to how railways are controlled in Russia.

In July 2019, the Egyptian Ministry of Military Production discussed establishing an Egyptian factory for carriage production with representatives from Transmashholding and Russian Railways.

In August 2018, Egyptian President Abdel Fattah al-Sisi met with a Russian delegation that included Deputy Minister of Industry and Trade Georgy Kalamanov as well as the head and representatives of Transmashholding and discussed ways to support the local manufacturing of carriages.

Waheed Qarqar, a representative of the parliament’s Transport Committee, told Al-Monitor, “The ERA has suffered a series of losses and deteriorating infrastructure, rails and carriages.” He added, “The state wants to develop the ERA and limit its losses through cooperation with Russia, which has strong political and economic relations with Egypt.”

Qarqar noted, “Egypt realizes that Russia is one of the leading countries in the field of train manufacturing. It is thus seeking Russian expertise in building new tracks and establishing investment projects, such as the shops that will be located along those tracks.”

He went on, “This cooperation includes supporting Egypt’s local manufacturing of carriages in the coming periods.”

There have been rumors on social media about attempts to privatize the ERA in light of the deals signed with Russia, claims the Egyptian government and Ministry of Transport have denied. In a January statement, the government said, “The private sector in ERA is a partner in the railway development process, but ownership … will not be transferred to it.”

The ERA's former president, Samir Nawar, told Al-Monitor, “Cooperation between Egypt and Russia cannot exactly be described as the privatization of the ERA,” adding, “The Egyptian-Russian cooperation is basically Russian participation in the investment in the field of railway development, but ERA will remain state-owned.”

Nawar added that because the prices of train tickets very low and if privatized, the railway authority, would have to increase them, leading to public anger. “The railway is an essential service for millions of Egyptians,” he said.

He stressed, “Egypt hopes that the success of the Egyptian-Russian cooperation in the railway field would encourage other states to cooperate with Egypt in this field. This could help the ERA solve many of the problems it is suffering from, including the deteriorating services and the lack of train maintenance.”