Activists around the Arab world have used social media to protest US President Donald Trump’s recognition of Jerusalem as Israel’s capital. 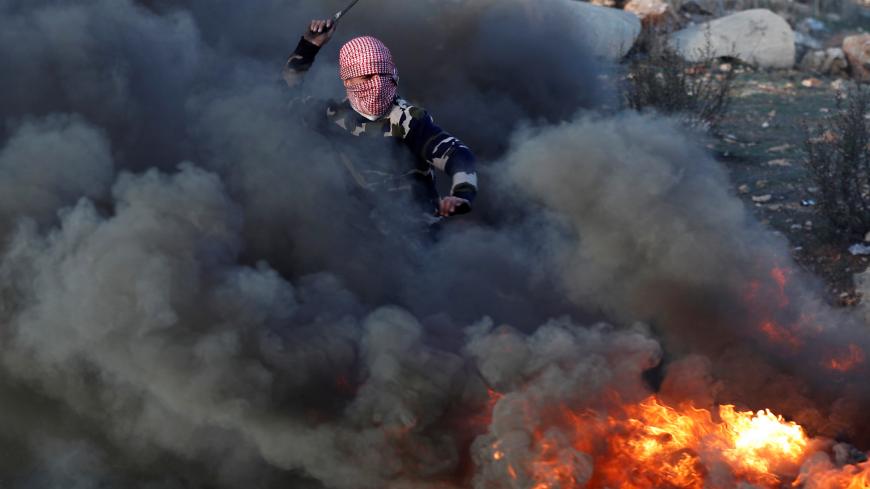 A masked Palestinian throws a stone at Israeli forces in front of a burned barricade during a protest against US President Donald Trump's decision to recognize Jerusalem as the capital of Israel, near Ramallah, West Bank, Dec. 11, 2017. - REUTERS/Goran Tomasevic

The US decision to recognize Jerusalem as the capital of Israel has resulted in an explosion of reactions in the streets and in political corridors. But perhaps the biggest response has been in the virtual world. Millions have turned to social media and digital platforms to express their support and position on Jerusalem. Hashtags such as #jerusalemcapitalofpalestine in English and Arabic have been trending for days.

Saed Karzoun, the founder and CEO of Taghyeer for Social Media and a Palestinian social media trainer in Ramallah, told Al-Monitor that the word “Jerusalem” in Arabic, with different adjectives to it, has been posted millions of times on individual social media profiles and other locations on digital outlets.

Aroub Soubh, a Jordanian social media influencer and a former host of a popular children’s program on Jordan TV, told Al-Monitor that the Arab world has been engulfed by virtual attempts to express support for the Palestinians and to reject the US move. “Jerusalem in both English and Arabic has been trending in the Arab world more than any other term. Phrases like ‘Jerusalem the capital of Palestine’ or ‘the eternal capital of Palestine’ have been made popular, which has encouraged people in Jordan to call for the cancellation of the peace treaty and the gas deal with Israel.”

As a result of the public outpouring of support, the Jordanian parliament voted unanimously to ask the judicial committee to review all agreements with Israel and to report on Israeli violations of these agreements.

While much of the anger and protests were directed at Israel, many singled out the United States for this decision. Popular protests outside US embassies in various locations were also reflected in online protests. In Jordan and Egypt, online calls for changing the name of the street where the US embassies are located produced concrete results.

Issam Bustanji, a city council member from Amman, told Al-Monitor that he has submitted a request to the Amman municipality asking to change al-Umawyeen Street where the US Embassy is located in the ritzy Abdoun neighborhood of Amman to "al-Quds al-Arabi Street" — Arabic for "Arab Jerusalem." In Jordan’s parliament, parliamentarians demanded a change of the street name where the Israeli Embassy is located to “Palestine Street.”

Khaled Dawoud, an Egyptian activist, picked up the idea and posted it on his social media account. Dawoud told Al-Monitor that he has contacted Egyptian parties and encouraged them to do the same in Cairo.

Egyptian musician Shaaban Abdel Rahim posted on YouTube Dec. 9 a song titled “Trump has gone mad.” The song has had more than 200,000 views as of the time of this writing.

The Trump administration’s Jerusalem move also produced reactions from around the world. Brazilian cartoonist Carlos Latuff drew a cartoon showing a woman wearing a Palestinian embroidered dress and beating a Trump figure on the back with her shoe as she tells him that Jerusalem is the capital of Palestine. Latuff told Al-Monitor by email that he has been drawing for and about Palestine since a trip to the West Bank in 1998. “Obviously, I had to make a cartoon about Trump's decision on Jerusalem,” he said.

Latuff was also unhappy with the reaction of Arab leaders in comparison to the public sentiment. “What made me angry is to realize that while Arabs are protesting in the streets, the Arab leaders are doing nothing. On the contrary, they are offering empty statements to Palestinians while maintaining collaboration with Israel.”

While the popular and online reaction was generally well-received and supported, not everyone was happy with it. A television anchor was fired from her job at a Saudi-owned station for her tweets on the issue because it was understood to be critical of the weak reaction in the Gulf region.

Ola Al Fares, a Jordanian anchor of Palestinian origin, was suspended from her job Dec. 7 as the main anchor of a weekly news program on the popular MBC television network according to Saudi media reports, simply because of a tweet she wrote encouraging Arabs to act against Trump, which some felt was criticism of the lukewarm reaction of the Gulf region to the US president. She later removed the tweet and wrote, “Those who try and misinterpret what I wrote should criticize Trump and not me who loves Saudi Arabia and its people.”

Others have argued that the virtual campaign is a waste of time. Columnist Imad Eddin Hussein wrote a column Dec. 9 in the left-wing Al-Shorouk newspaper of which he is the editor-in-chief mocking social media activism, under the title “Struggle By Way of Changing Your Profile.” In his article, Hussein talked about how social media has replaced real struggle. “When we get mad, we change our profile for two days and then we go back to normal,” he argued.

But the attack on social media activism was rejected by a Palestinian Jerusalemite living in Sweden. Alaa Abu Diab posted a video online Dec. 8 saying that in today’s world, social media has a major influence on political decision-making and that countries that are trying to change public opinion employ and support people who are social media influencers.