Why did Turkey ban a Brazilian cartoonist? 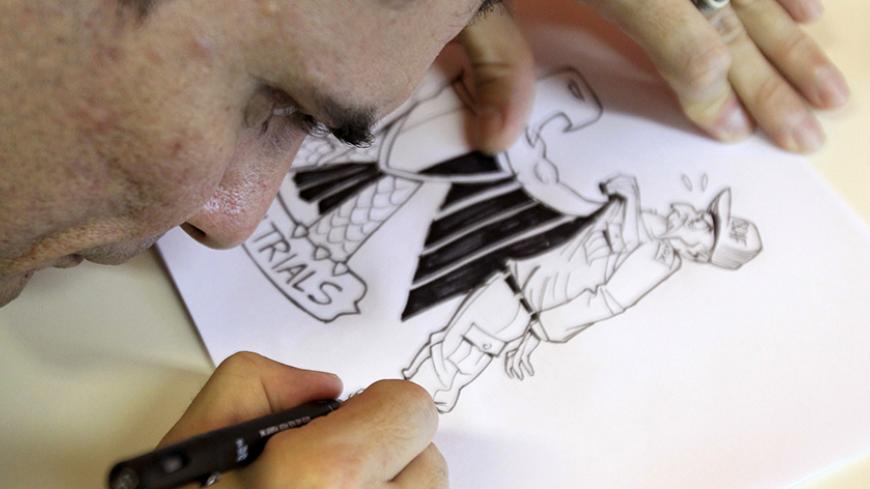 Brazilian political cartoonist Carlos Latuff is popular with my 12-year-old son who grew up seeing Latuff’s cartoons on my computer and who refers to him as his "Middle Eastern politics teacher." Several of my college students with Latin American or Middle Eastern roots regularly follow Latuff’s work. His passion for Palestine, his work titled “Tales of Iraq War” and his respect for religious values have made him rather popular among Turkish Islamists over the last decade. Latuff is known for his courageous and unapologetic stand with oppressed groups all over the world. No human concern is too distant and irrelevant for him.

He is a hero to not only the left wing but also the Islamists in Turkey. For this reason in January 2015 pro-government daily Sabah praised Latuff by calling him “a world-renowned Brazilian cartoonist.” Yet on Dec. 8, the Official Gazette reported that Latuff's website was banned and could no longer be accessed in Turkey.

The people of Tunisia, Egypt and Yemen as well as those in other Middle Eastern countries followed the developments of the Arab Spring through Latuff's cartoons. They found hope and inspiration in his drawings. People in Turkey often question if he really is not Turkish, because according to many, he understands the Turks and the situation in Turkey better than their own government. Latuff has created drawings about various turning points in Turkish politics — many of which members of the Justice and Development Party (AKP) would like to ignore and forget.

His work includes drawings of the bombings in Uludere, a border town where 35 Kurdish villagers have become collateral damage; of Recep Tayyip Erdogan as a diminutive figure dangling from his collar in the hands of young Berkin Elvan, who was a victim of police brutality in Istanbul during the Gezi Park protests; and of Erdogan as Gollum after Erdogan sued a doctor for a Gollum meme. Of the latter drawing, Latuff said that if he was residing in Turkey, he would be most likely in jail by now.

(A cartoon by Latuff depicting Erdogan as Gollum from Lord of the Rings, image courtesy of the artist)

As Erdogan’s power expanded in Turkey, Latuff would draw more of him. Interestingly, he refers to Erdogan as his muse. In 2001, for instance, he posted this cartoon of Erdogan. Latuff has not been shy to create drawings of Erdogan’s restrictive approach to freedom of speech and his government’s attitude toward man-made disasters, such as the one in Soma.

Indeed, it was Erdogan’s adviser Yusuf Yerkel — known as the man who kicked a mourning miner to the ground in Soma — who went to court to ban access to any website that had reported on this incident. The court, as expected, granted Yerkel’s wish ordering the negative commentary about him on social media to be taken down and banning access to Web pages that had reported on the incident.

The cartoon below brought the final Internet ban to access Latuff's cartoons in Turkey. On May 16, 2014, Latuff tweeted the cartoon to Erdogan and Yerkel, with the Turkish captions that read, “This is the picture we really want to see.” Although pro-AKP media no longer praise Latuff, his work is ubiquitous in Turkey. Islamists as well as leftists respect his consistent advocacy, particularly on Palestinian rights. In addition, as more Turkish cartoonists are silenced, Latuff has become Erdogan’s virtual nemesis. 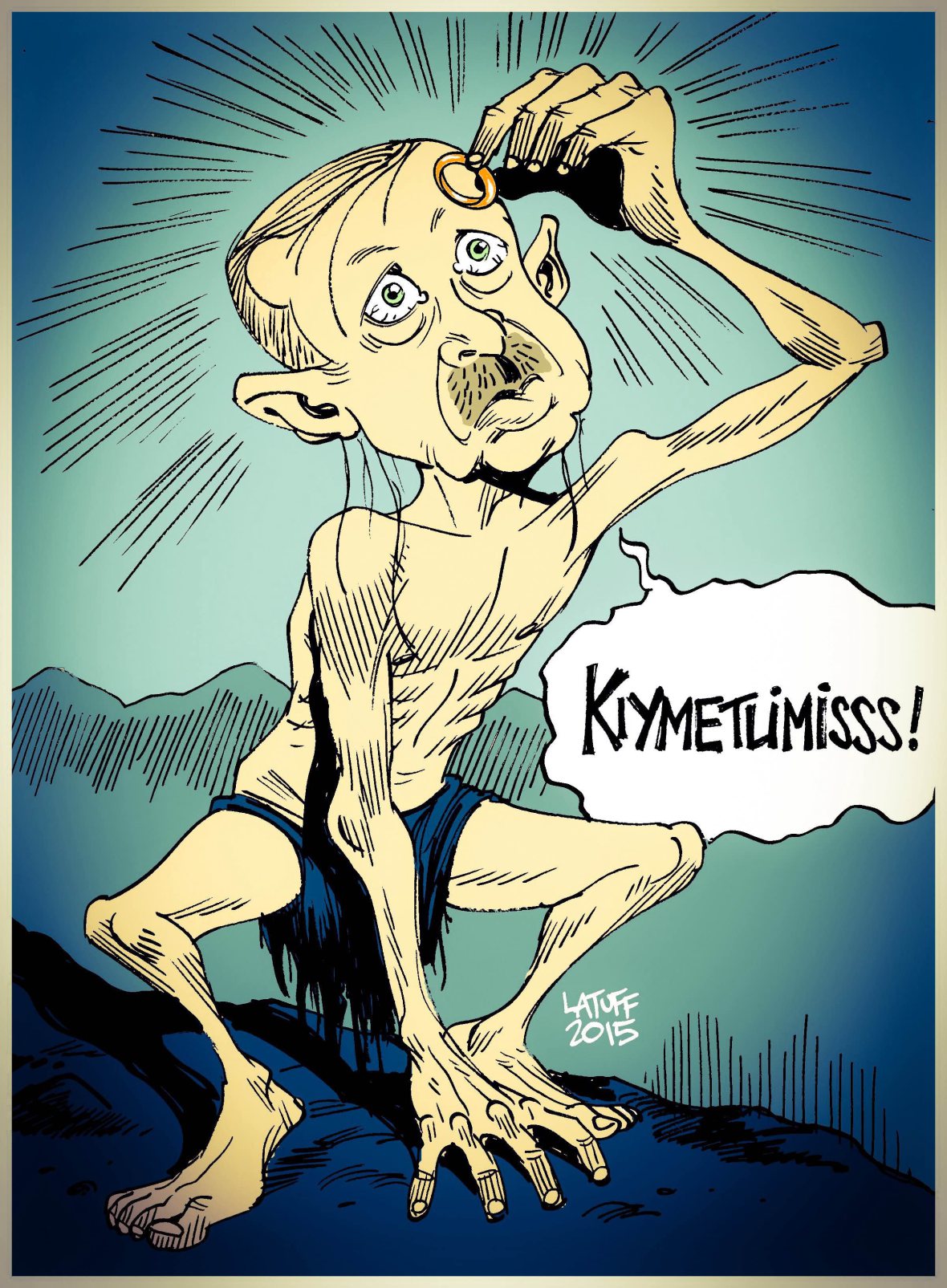 (A cartoon by Latuff depicting Erdogan and Yerkel, image courtesy of the artist)

Al-Monitor interviewed Latuff via email, and he appeared to be rather humble and easily approachable for a man who draws such acerbic cartoons.

The text of the interview, which has been lightly edited for readability, follows:

Al-Monitor:  Mr. Latuff, in Turkey you are known as the Latin American or Brazilian artist who draws Erdogan. Members of the opposition — left and right wing — cherish your work, whereas pro-government sections detest it. Although you are popular in Turkey, many people do not know who you are and why you are interested in Turkey. Any personal information you may want to share with the [Al-Monitor] readers?

Latuff:  My personal life does not tell your readers much. The interest I have for Turkey is the same interest I have for other countries. I am a political cartoonist, and international affairs is my specialty. The difference is that I have been to Turkey, as well as Palestine, and this is what gives me a more personal approach.

Al-Monitor:  What are some of the reactions you have received from Turkey, via social media and other means? Have you visited Turkey? I recall reading you are banned from visiting Israel. Are there other countries in the region that you are banned from? Also, access to your blog and cartoons is banned in Turkey. Has this type of ban happened to you before?

Latuff:  Turkey is the only country where access to my cartoon blog was officially blocked. I haven't heard of a similar ban in other countries. In the case of Turkey, I have the document from the Turkish government certifying the ban. Regarding visiting countries like Egypt, Bahrain and Israel — I drew many cartoons critical of [Egyptian President Abdel Fattah] al-Sisi, King Hamad [bin Isa Al Khalifa of Bahrain] and [Israeli Prime Minister Benjamin] Netanyahu — I wasn't officially informed about a travel ban. But I am almost 99% sure that I would have trouble with the authorities at the airports [of those countries]. If I spend hours at the airport in Belfast talking to the police about my cartoons, imagine [what would happen] in Cairo, Manama or Tel Aviv. I do not expect a travel ban in Turkey, but it would definitely be a risk to visit Istanbul now due to my views and cartoons about Sultan Erdogan.

Al-Monitor:  Turkish cartoonists and political satire in general have been facing severe legal and financial penalties, but this is the first time a foreign cartoonist is facing a legal ban in Turkey. Given the fact that you are quite interested in Palestine and your work emphasizes injustice around the world — but particularly in the Middle East — do you think Israeli-Turkish rapprochement [Erdogan said, "Turkey needs a country like Israel."] is one of the reasons for the ban of your work?

Latuff:  This ban is a clear sign that Turkey is everything but a democracy. If you punish artists for mocking politicians, then definitely you do not have a democracy. I was entirely opposed to the ridiculous depictions by Charlie Hebdo of the Prophet Muhammad, but I have no problems criticizing or even making fun of opportunistic politicians like Sultan Erdogan. Of course you will have detractors who will accuse me of being an Iranian puppet or even a Zionist; this kind of laughable accusation was also made against me in Egypt when I criticized the military junta and now Sisi. Add to the list of nonsense accusations that I would be working for [Russian President Vladimir] Putin. My enemies have a fertile imagination. It is in fact a lack of argument — if you don't agree with Erdogan, it is because you are an agent of Iran, Russia, outer space or whatever.

Al-Monitor:  You called Erdogan your muse, and you said he is an easy caricature. Why? How did this ban affect the popularity of your cartoons in Turkey? I see them more frequently in opposition media outlets, on social media and so on, but what is your impression?

Latuff:  When I was in Turkey in 2010, I realized that I couldn't access some websites by common means, but I also realized that people use software and apps to deceive the government block. So I think people will continue to have access to my cartoons anyway. Sultan Erdogan is good for cartoons since he is a living caricature of an opportunistic, corrupt politician.

Al-Monitor:  There is news in Turkish on your Twitter feed, as well as Turkish words in your cartoons. Are you connected with Turkish artists?

Latuff:  I don't speak Turkish or Arabic. I have friends who kindly translate for me.