A simple meme posted over social media has spawned an official Turkish investigation into the legendary fictional character "Gollum" from "The Lord of the Rings." 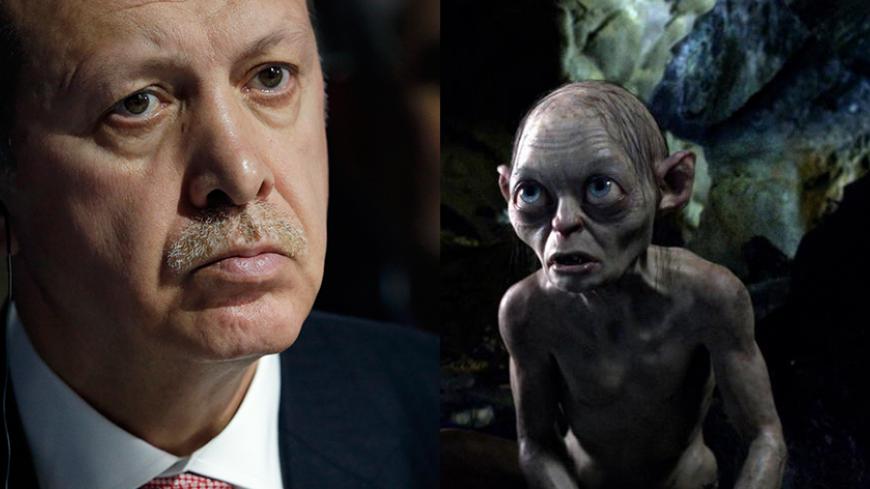 Is "Gollum" a villain or a victim? This burning question currently occupies the minds of analysts and justices on a much politicized case in Turkey. The answer will determine whether Dr. Bilgin Ciftci, who has already been expelled from the Public Health Institution of Turkey, will end up going to jail for offending Turkish President Recep Tayyip Erdogan. It will also set a precedent for other cases of dissent and political satire.

Gollum is a fictional character from J.R.R. Tolkien’s legendary fantasy novels "The Hobbit" and "The Lord of the Rings." Who among the books' fans and movie viewers can ever forget the line “my precious” uttered by the “slimy, dark creature” called Gollum? The fictional character goes back and forth between good and evil, light and darkness, victim and villain, often talking to himself. Born a hobbit named Smeagol, he is corrupted by the titular ring. He says, “You are liar, a thief … murderer” and replies to himself, “I am not listening.” Whether one thinks of Gollum as primarily a victim or a villain, this petty creature sure oscillates between them. He refers to himself as “we” and forms memorable if grammatically disastrous phrases such as “we needs it, we hates it forever.”

Whether or not you find him creepy, you cannot help but feel for Gollum, who resembles an addict. Yes, he does evil things, but then again, he acts under the influence of the ring, which corrupted his soul. Like a potent drug, the ring has the power to rule even Bilbo Baggins, the main character. That said, the ring comes with mixed blessings. It extends Gollum’s life beyond its natural limits, while also corrupting him and leading him into a miserable, lonely existence — in a sense destroying him. Smeagol the hobbit becomes the abandoned loner, the wicked but pitiful Gollum.

So what does all this early 20th century fiction have to do with Erdogan? It all started on Aug. 23, 2014, when Ciftci shared a meme of three exaggerated facial expressions by Erdogan and Gollum side by side, displaying states of surprise and amazement and eating, on his Facebook page. There was a complaint, and an investigation was opened immediately. Subsequently, Ciftci lost his job in October.

This is not the first time Erdogan and Gollum have been compared. Indeed, one can easily find YouTube clips from the movies with Gollum subtitled with Erdogan's words in Turkish. During the December corruption probe, such videos and memes were widely circulated over Turkish social media. Ciftci’s defense team has argued that elected officials should be more tolerant than ordinary citizens of criticism and satire.

Initially, almost everyone involved thought the case would be promptly dismissed. However, the case took an unusual turn. The Gollum meme was declared “ideological” and banned at the Public Health Institution, where Ciftci worked. The investigation prepared several reports, one of which claimed that this sort of offensive memes goes against the will of the Turkish people. In a nutshell, the report argued that it should be remembered that such memes target a man who has been elected president by 52% of the vote, about 21 million Turks. The report claimed, “These sorts of memes have no positive impact and … [are] part of an operation to tarnish the elected government’s reputation.”

Article 299 of the Turkish penal code says that anyone who insults the president can face up to four years in prison, and the prison term goes up if the crime is committed publicly. If found guilty, Ciftci may be imprisoned for his Facebook post.

If Gollum is found to be evil, then the meme will be considered “offensive” and Ciftci would be guilty of offending Erdogan. Yet the judge was not familiar with the Tolkien series, and could not independently decide on the character of Smeagol or Gollum. So he asked for an expert council to gather. The court-appointed council contains two academics, a "TV expert" and two behavioral scientists. The absurdity of putting Gollum on trial has sparked a domestic and international uproar.

The case has been covered by a few left-leaning newspapers in the last year. Evrensel reported about the case in detail, and is now under investigation for reporting the news and sharing the meme. On Oct. 19, Vural Nasuhbeyoglu, its editor-in-chief, was called to the courthouse to answer questions.

Though Evrensel, along with a handful of other outlets and a few parliamentarians from opposition parties, have responded and Ciftci’s colleagues have organized protests to show solidarity with him, it was not until the investigation turned the spotlight on Gollum that global media outlets turned their attention to the case. From Foreign Policy to The Guardian, the case has made it onto almost all the major news outlets since Dec. 1.

On that date, Peter Jackson, the Oscar-winning director of “The Lord of the Rings,” chimed in. Jackson provided a different perspective to the question of whether Gollum is a villain, arguing that the meme that Ciftci shared was not depicting Gollum, but rather Smeagol. He said, “Smeagol is a joyful, sweet character. Smeagol does not lie, deceive, or attempt to manipulate others. He is not evil, conniving, or malicious — these personality traits belong to Gollum, who should never be confused with Smeagol. Smeagol would never dream of wielding power over those weaker than himself. He is not a bully. In fact he’s very loveable.”

Ciftci’s defense team has said it would include Jackson and Wood’s statements in the case file, but it is not yet known if the court will agree to take them into consideration in February.

And what if the meme is found to depict Smeagol? Would there then be a new court-appointed council to investigate the character of Smeagol the hobbit?

The case has been trending on social media, and discussion has been posted in several languages. A Google or Twitter search for “Gollum” produces suggestions including Erdogan and the meme.

Carlos Latuff, a renowned political cartoonist, expressed his views on the controversy in a cartoon that begs the question of whether Latuff will be prosecuted for it.

If the prosecutors’ goal was to deter people from following Ciftci’s example of sharing satirical posts about Erdogan over social media, their efforts have backfired. If we only compare the number of viewers in August 2014 of Ciftci’s Facebook post to the current interest in the Erdogan versus Gollum traffic, we can see that the court case has connected Gollum’s image with that of Erdogan in the minds of hundreds of thousands all around the world. This could not have been a pleasing situation for Turkey’s public diplomacy. As shown previously, the Justice and Development Party has utterly failed to control political satire, and it cannot seem to learn to let it go.