Fans across Iran are waiting eagerly for the new season of "Game of Thrones," a show whose content and storytelling style resemble the epic tales Iranian children grow up with. 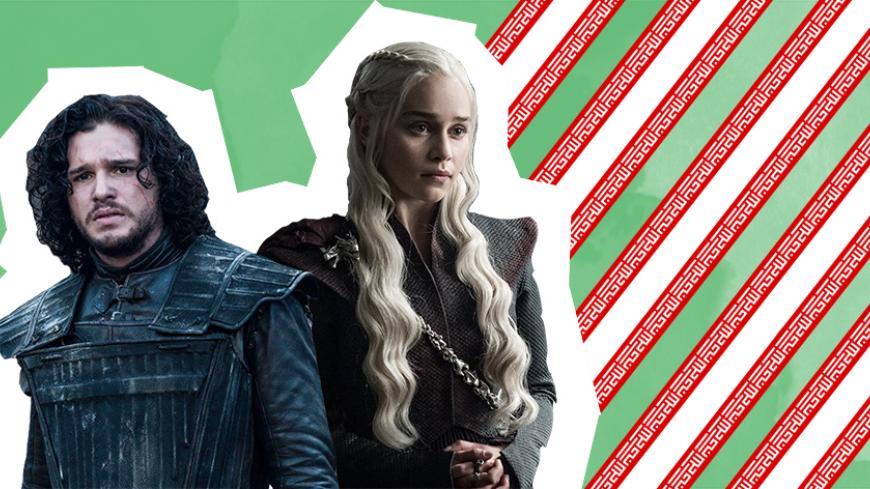 “Why isn’t Khal Drogo on the list?” asked an outraged fan, clearly dismayed that a list ranking the best swordsmen on “Game of Thrones” has omitted Khal, warlord of the mighty Dothraki. According to this Iranian fan, the dark-eyed horse warrior should have a place on the list at the Persian-language fan website winterfell.ir.

Westeros fever has gripped Tehran and other cities as Iranians eagerly count down the days to season seven of HBO’s series to begin on July 16. Some might credit the interest to the fact that its composer Ramin Djawadi is of Iranian descent. Others point to the fictional legend of Azor Ahai — a deity known as the Lord of Light — being inspired by Zoroastrianism, a monotheistic religion with origins in Iran that views fire as a representation of the light of God. However, Iranian fandom for “Bazi Taj va Takht,” literally “game of crowns and thrones” in Persian, delves much deeper than that.

“The show has good music and is unpredictable,” explained fan Mohammad Reza to Al-Monitor. “The fact that some parts are inspired from real history makes it much more addictive.”

Iranians have been reading epic stories of dueling kings for hundreds of years. Long before American novelist George R.R. Martin, there was 10th-century Persian poet Abolqasem Ferdowsi. His best-known work — the “Shahnameh,” or “Book of Kings” — is an epic poem with over 60,000 couplets chronicling the history of ancient Persia from the beginning of civilization to the Arab invasion that brought Islam. With his epic work, Ferdowsi managed to not only preserve a snapshot of the Persian language, but also Persia's history and mythology. The "Shahnameh" is a classic on par with the ancient Mesopotamian “Epic of Gilgamesh” and Homer’s Greek epic poems “The Odyssey” and “The Iliad.” Just like “Game of Thrones,” the “Shahnameh” offers plenty of heroic conquests, glorified warriors, great battles, romance and mystical beasts. Iranians also have the 12th-century folklore collection “Samak-e Ayyar” by Faramaz Ibn Khodadad. "Game of Thrones" offers a familiar style of storytelling that is very much in line with the one Iranians grow up with.

“This is a story we read over and over in history books. The king dies, the different parties and family members duel over who will replace him,” said Ehsan, also a fan of the show. “The entire country is weakened until one of the parties manages to come to power and then there’s an era of stability for a few decades.”

Arguably, Islamic history offers a similar storyline as well. When the Prophet Muhammad passed away, there was a long struggle over his succession. The martyrdom of his grandson, Hussein — who duels with Yazid in Karbala after refusing to pledge allegiance to him as caliph — is an important holiday commemorated as Ashura and is acted out in passion plays across Iran.

Ehsan believes the "fantazi" genre was popularized in Iran in part thanks to J.K. Rowling’s “Harry Potter” series and J.R.R. Tolkien’s “The Lord of the Rings” and “The Hobbit.” These books have all been translated into Persian and even state media outlets have aired censored versions of the films dubbed in Persian. There are various fan websites dedicated to the genre, such as fantasy.ir and arda.ir, which use the Islamic Republic’s country domain and servers. When Ehsan was about 14 years old, he had started one of the first Harry Potter fan websites called "Persian Wizards." But as with all popular initiatives, copycat websites popped up so he eventually moved on.

“Despite being fantasy, 'Game of Thrones' has too much sex and violence,” said Ehsan. “Islamic Republic of Iran Broadcasting is way too conservative for that.”

Since uncensored Western television series and movies are deemed un-Islamic and therefore illegal, Iranians watch pirated versions of the show distributed on DVDs and USB sticks. Just type in the Persian translation for "Game of Thrones" and over a dozen websites pop up offering free torrents of the show, sometimes with Persian subtitles and even dubbing. The video and translation quality varies widely.

Similarly, winterfell.ir offers downloads of Persian translations of the older books in the series. There is even a section for recruiting translators. There are at least several unauthorized translations of Martin’s books and others, including J.D. Salinger’s “The Inverted Forest” and Khaled Hosseini’s “And the Mountains Echoed.” Iran has not signed the Berne Convention on copyright.

The show also has a strong Persian-language social media following. “Game of Thrones” Facts (gotfacts.ir) has over 109,000 followers on its Instagram account. It posts Persian and English memes alongside photos of the characters as well as the actors posing on the red carpet. There is a Telegram channel bearing the same name with over 45,000 members and detailed posts about the show. According to Tech Rasa, based on the social media numbers alone, Iranians make up 3.4% of its fans worldwide in a country that represents 1% of the global population.

Not everyone in Iran is interested in who will take the Iron Throne, of course — and for good reason. “I try to be cautious around television series, as I already waste all my time anyways,” Roya from Tehran told Al-Monitor. “I’m trying to stay away as much as I can.”