Shahnameh of the Digital Age

A vibrant new version of the Persian epic reconstructs 500 years' worth of images and texts to create a modern mythology for English speakers and Iranians alike, writes Roja Heydarpour. 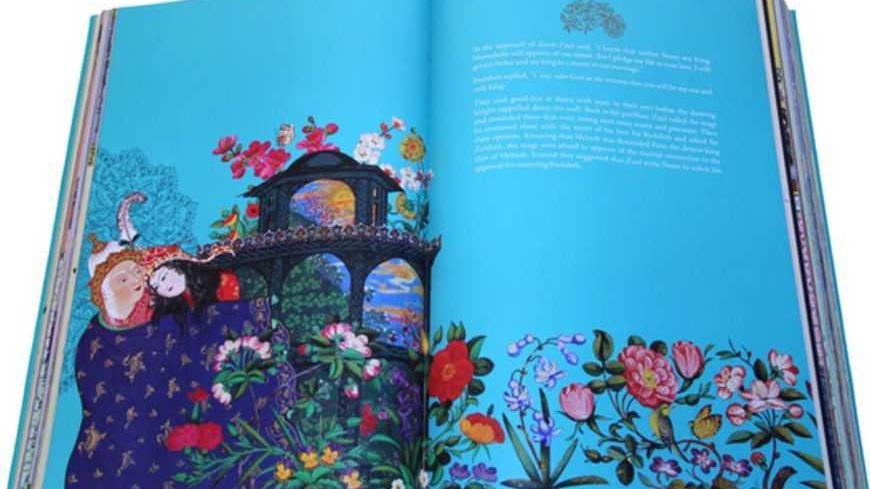 In his small studio in Brooklyn Heights, New York, Hamid Rahmanian spent 10,000 hours in front of his computer cobbling together a new Shahnameh, the epic mythology of Iran.

In the 1,000 years since the Persian poet Ferdowsi put the oral tradition into verse, there have been many versions produced in lithograph, miniature and manuscript form. To create Shahnameh: The Epic of the Persian Kings, Rahmanian meticulously researched and scanned images and texts spanning the 14th through the 19th centuries, from the Indian subcontinent to the Levant and beyond.

“I work like a DJ,” said Rahmanian, 44, an award-winning graphic designer and filmmaker. “A DJ samples music that already exists and manipulates the song and creates their own original music.”

Once he had grabbed the images, Rahmanian digitally retouched and recomposed them into an elegant, vibrant and very readable Shahnameh. The book itself is like a Photoshop epic. Each page has anywhere from 7 to 120 layers to it, and as anyone who has ever attempted to make the slightest alteration in Photoshop will know, that requires a lot of time, skill and attention to detail.

Through digital manipulation, Rahmanian was able to take characters that existed in different Shahnameh’s and make them recognizable throughout the story. In this way, he created a character-based narrative that any reader can easily follow.

The goal was to create a Shahnameh for a new generation of readers, whether they are English-speakers who have never heard of the Persian version of the Odyssey or second-generation immigrants who know aunts and uncles named after characters in the epic but have no clue about the story behind the namesake.

The idea first took hold in Toronto in 2008 when Rahmanian and Melissa Hibbard —his wife, collaborator and editorial director on the Shahnameh project — attended a musical about one of the stories in the epic. They were desperately bored by the simplistic adaptation for a Western audience. As Rahmanian lamented over the lackluster performance, Hibbard made a pointed observation. “She looked at me and said, ‘You Iranians always say, We had this, We had that. Why don’t you just sit down and do it?’” recalled Rahmanian.

Hibbard, an American who effortlessly speaks to their toddler in Farsi, very much had the authority to make this observation. She and Rahmanian married 14 years ago and since have collaborated on projects, including Shahrbanoo, a humorous film documenting their trip to Iran when Hibbard spent time in an ultra-conservative household.

While the sampling aspect of their Shahnameh is similar to DJing, the storytelling derives from the tradition of film.

“We wanted to make the story very cinematic because we make films,” said Rahmanian. “Each new translation should meet the criteria of the time it is being translated. In these days, people are familiar with the language of cinema, they know parallel edits, flashbacks, so this new vocabulary will make the story more alive and more modern.”

He emphasized the “economy of film” in the making of the book. In other words, they wanted to boil down this sprawling epic while retaining its integrity. Therefore, with Hibbard as part producer, taskmaster and cultural bridge for Shahnameh, they worked closely with their translator, Ahmad Sadri, to massage the ancient Farsi texts into breathy stories that are appealing to adults as well as children.

Aspects of this Shahnameh that have not previously been illustrated, Rahmanian said, are the characters' dreams and nightmares, deceptions and lies. These run throughout the ancient texts, and Rahmanian has created ethereal dream sequences of the characters telling lies or dreaming prophesies.

When Rahmanian tells the story of his and Melissa's life over the last four years — when he became immersed in this massive undertaking — some of it seems like a dream, and perhaps some of it like a nightmare. He rapidly fires off the names of all the potential investors who never came through and the single-digit sum in his bank account staring at him when their daughter was born.

Although Rahmanian doesn’t admit to any specific mysticism or religious belief, he does acknowledge that in the past, those who illustrated parts of the Shahnameh believed that it was a divine directive. In modern times, that divine inspiration could be translated as having a social conscience.

“All my work has some social aspect to it,” said Rahmanian. “Even Shahnameh. I feel it’s good for the society. It adds a little color. That way, I feel better about my conscience.”

Shahnameh: The Epic of the Persian Kings will be published in April 2013 and is currently being promoted through talks and other events in the United States.

Roja Heydarpour is culture editor at large for Al-Monitor. She has written and edited for The Daily Beast, The New York Times and The Times-Tribune. Follow her on Twitter @rojarojaroja.