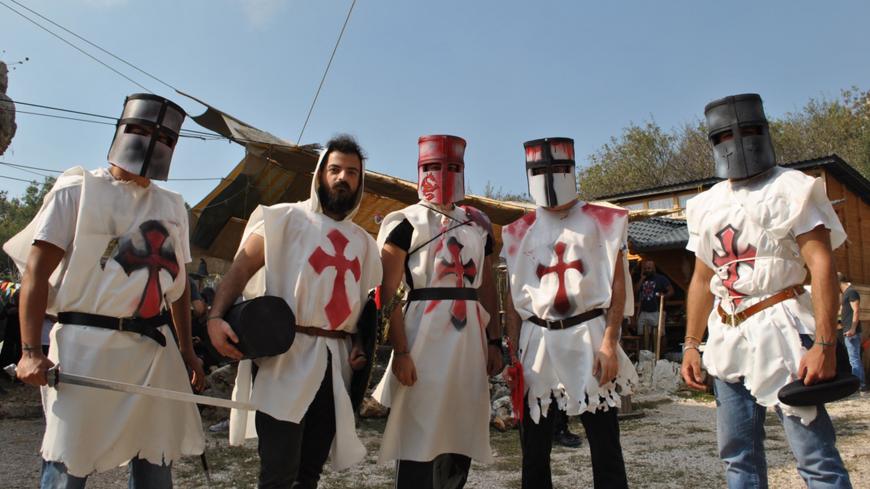 FAITROUN, Lebanon — Wearing tunics, capes, corsets and kilts, hundreds trekked to the Lebanese mountain village of Faitroun, 20 miles from Beirut, to participate in the Middle East’s first ever Renaissance fair, Tales of Moon and Sun. To many a bizarre event, Tales of Moon and Sun is the culmination of multiple growing subcultures and hobbies in the country, ranging from board games to camping.

A Renaissance fair emulates 15th century Europe through elaborate costumes, events such as archery and traditional food. Many Renaissance fairs also revel in anachronisms and fantasy, with Viking raiders and metal-clad crusader knights standing side by side with wizards and elves. The fairs are rare outside the UK and the United States.

But Tales of Sun and Moon, held Sept. 22-23, has introduced Renaissance fairs to the Middle East. The event was organized by Maze of Tales, a company that runs team-building events by creating games that require groups to solve puzzles and work together.

“We are creating a medieval fantasy. … We are also storytellers. We like to make games that allow a player to discover themselves,” Carla Kamel, the creative director at Maze of Tales, told Al-Monitor.

In this case the game was a day-long, 200-player narrative-driven scavenger hunt. The competitors were divided into two teams, Sun and Moon, and then into smaller clans of 10. The players were told a story by a wise man in a long dark robe, setting up the plot behind the game.

The caped man explained that humans, elves, wizards and orcs once lived in peace. Each race made artifacts as a symbol of their prosperity. However, on one fateful night, the elf king was murdered and his artifact stolen. This grisly crime broke the peace and led to distrust and conflict between the races.

It was the players' job to find the artifacts of each race by completing challenges such as tightrope walking and drinking competitions, all while uncovering the story behind the king’s murder and the rise of a secretive assassin guild. The clan to find all the artifacts first received the location of the final reward, a treasure chest with $1,000 inside.

Tales of Sun and Moon, with its intensely European appearance, seems to be an odd event for the Middle East. However, for those attending it is a synthesis of various hobbies and interests that have been growing in Lebanon’s younger generation.

“We have quite a large metal community and the metalheads are into Viking culture, and from Vikings you get to Medieval,” said Jihane Abou Zeid, a Lebanese data analyst dressed in a forest green linen-and-leather dress with elf ears peeking through her braided hair. He was referring to patrons of events such as the Sept. 7 Beirut Metal Festival, which was revived in 2018 after a yearlong hiatus.

Abou Zeid added that she became interested in the event through ComicCon, a worldwide pop culture convention that has been running in Lebanon for half a decade. Participants in this event will often make detailed costumes of their favorite fictional character, in a form of fashion and performance art known as cosplay.

For Abou Zeid it was an easy transition from cosplay to the Renaissance fair as she always had a passion for fantasy. She said, “At first it was Harry Potter, then Lord of the Rings, and now it is my whole life.”

Her friend Michael Jacklis, a financial analyst dressed as a 16th century monk reminiscent of Robin Hood’s Friar Tuck, shares Abou Zied’s interest in fantasy novels. He told Al-Monitor, “I have a huge library of fantasy books that I have gathered from around the world.”

However, Jacklis also pointed to his love of popular video games, such as God of War, which follows the violent exploits of ancient pantheons, and Skyrim, one in a series of rich fantasy roleplaying games in the land of Tamriel, as leading to his interest in Renaissance fairs. Gaming is another subculture growing in Lebanon as the first ever Lebanese Gaming Championship, a competition between professional gamers, was held in late August this year.

Moe Bachir, a market researcher for startups, said that his attraction to Tales of Sun and Moon emerged from his passion for comic books. Startup founder Hassan Bayloun said he was fascinated by the event after playing board games such as the tabletop strategy game Dungeons & Dragons.

These disparate niche communities all found various aspects of the event appealing, be it the costumes, gaming or narratives. Even those involved in the organization of Tales of Sun and Moon all have their own reasons for creating it.

Rita Massaad, a Lebanese artist who designed the costumes for the staff and ran a stall where patrons could dress up in a variety of medieval outfits, said her interest was piqued for aesthetic reasons. “We are campers, we are travelers. … We like that everything is handmade, that it is artistic.”

Carla Kamel explained that while her business partner and game designer at Maze of Tales, Karim Khneisser, wanted to start the event because of his love for the history of medieval and Renaissance Europe, she had a different reason: “I have a passion about the fantasy world and I like to do events, because people come to have and explore new things.”

At a glance a Renaissance fair in Lebanon may seem a passing oddity, but to those who went, the event represents a deeper cultural movement within the country.

As Jacklis told Al-Monitor, “It's a natural progression of these interests, with people accepting them more and more.”

Correction: Sept 26, 2018. An earlier version of this article stated that the company Maze of Tales also organized Escape the Room, which is not the case.