Young Israeli fashion designers Sasha Nassar, Dana Muskat and others are following in the footsteps of Alon Livne on their way to the international fashion arena. 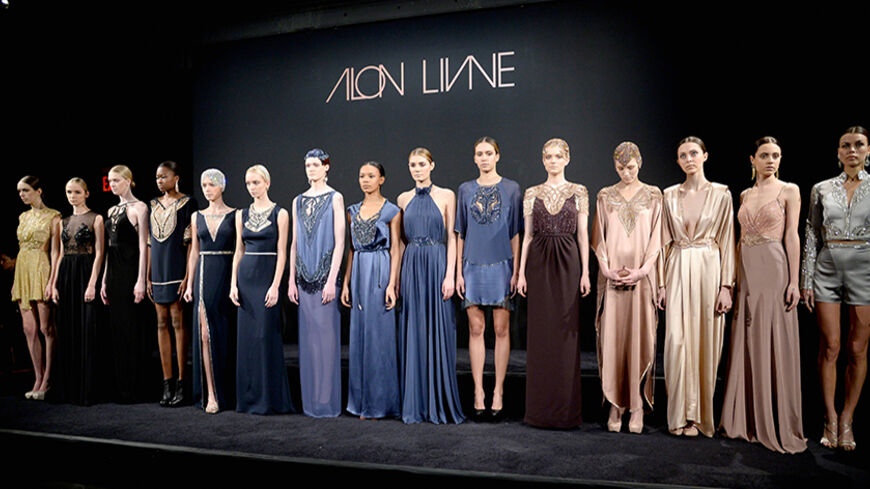 PARIS — The Muuse 2014 spring-summer line is now on sale, featuring for the first time a collection by a young Israeli designer, Sasha Nassar. Nassar, 27, who has been working with the Danish online boutique for several months, turned her end-of-the-school-year collection into accessible prêt-à-porter (ready to wear) designed items — a specialty of the Danish fashion design studio, which cultivates young talent and guides them toward commercial success.

The Israeli fashion scene considers Nassar's success yet another milestone in a distinct trend among young Israeli designers. These days, many young Israeli designers aspire more than ever to "make it" in Europe and the United States; breaking onto the Israeli scene is no longer enough. Most Israeli designers take the long route, by establishing their label in Israel first and then trying to sell their designs overseas. There are some designers, however, who take the shortcut, storming Paris, New York or London fresh out of design school. Jaffa-born Nassar and Dana Muskat from Tel Aviv are examples of such fearless designers. Both these young designers embarked directly on a European-Parisian journey.

Nassar does not hide her hopes of becoming the next international name for Israeli fashion. If asked, she will hesitate at first, emphasizing that she is still learning, but she is planning to make a name for herself in Europe, and will only start the "Sasha Nassar label" after returning to Jaffa.

Nassar's role model for an international break is Alon Livne, 29, who became a New York celebrity after Beyonce chose a dress of his for her concert tour. In an interview with Al-Monitor, Leora Hadar, the Israeli trade attache in Paris, offers other names as well: shoe designer Kobi Levi, who has become a celebrity with his fun and imaginative footwear being sold all over the fashion capitals (easily distinguishable when window shopping on Rue de Bac in Paris or Manhattan's Fifth Avenue), and Golan Frydman, who set up his design workshop in London five years ago and whose successful brand Fyodor-Golan sells dresses to Lady Gaga.

Fresh out of the prestigious Milan-London-Paris Marangoni School of Fashion, Nassar seeks to follow in Livne's and Levi's footsteps, though she is trying to make a breakthrough in Europe, not across the Atlantic. She was selected by her school to take part in the international fashion show of the 2013 London graduate fashion week, which assembled the most talented fashion students of Europe. Her collection "Arab spring" won the hearts of judges and spectators alike, earning her the opportunity to develop a collection with the well-known online fashion site Muuse. The young designer also works at the renowned Parisian fashion house Cacharel.

Nassar spoke to Al-Monitor at a hip cafe in the Marais quarter of Paris. Dressed in a clean-cut black-and-white checkered dress and well-worn boots, she talked about her grandmother, a Jewish immigrant from eastern Europe who moved to Jaffa, where she fell in love with a local Palestinian Muslim who fixed up her house. The history of her family is intertwined with that of Jaffa's as a mixed Jewish-Arab city. Nassar defines herself as an Israeli, a Palestinian and of Muslim heritage.

"My cousins at the Kibbutz follow my fashion career relentlessly!" she said. When explaining her "Arab spring" collection, she opens a window to her rich cultural environment. "My pieces weave the story of modern Muslim women of our epoch, the thread relating to tradition and revolution. But it also reflects my personal journey, that of a young Palestinian-Israeli woman, crossing barriers of politics and religions."

Her pieces indeed tell a tale — that of a woman trapped inside her burqa. Her delicately designed burqa has no sleeves or pockets, thus the woman wearing it cannot free her hands. Her gown covers her from head to toe, with only her eyes unveiled. The dress she wears is not traditional but somewhat transparent, in a printed white fabric, designed by Nassar. "My dresses take after the architectural element of the mashrabiya, the Arabian window that conceals those inside the house, yet allows the rays of the sun to infiltrate," she said.

The original collection contains six pieces. As the catwalk progresses, so does Nassar's modern Muslim woman. The burqa evolves: hands appear, the face is unveiled, the dress lines become bolder, decorated with black lace and jewelry. The woman inside steps out. She is the same, yet different. She is both Eastern and Western, a vision that has captured the attention of the French fashion industry.

The City of Light has embraced not only Nassar, but also the young designer Muskat. After graduating from the Israeli Shenkar College of Engineering and Design three years ago, Muskat decided to move to Paris. She spent several months with the French-Italian fashion house Giambattista Valli, where she orchestrated fashion shows. Later, she assisted the French designer Lea Peckre, who taught her the secrets of fine tailoring. She was also chosen to train at the Lanvin fashion house.

"When I finished my training in Paris, I realized that I needed a fresh start. I was exposed to the finest fashion design, but lost my own spirit and vision," Muskat told Al-Monitor. "I decided to take a break and work with dancers, choreographers and musicians, reshaping my personal design language."

The young designer embarked on an unusual project, collaborating with two dancers and a drummer. Here, she explored relations between textiles and modern dance, designing her own prints and establishing a dialogue with her personal Israeli symbol language, such as the use of Jewish ritual cloths and artifacts as well as that of the city around her. Other projects followed, and she has been working with young French choreographers for quite some time now.

Muskat, much like Nassar, intends to stay in Paris where her Israeli "baggage" can mature and grow in a different way than back home. Her latest project involves a dancer and a video artist, testing and redefining relations between movement, costumes and video art, a theme she is convinced will flow into the coming years. "I'm building a long-term project," she explained. "I'd rather not open my own shop in Tel Aviv at the moment, as several of my classmates have done. My multilayer fabric work from my Israeli school years is evolving here now. My encounters in Paris help me to grow as a designer."