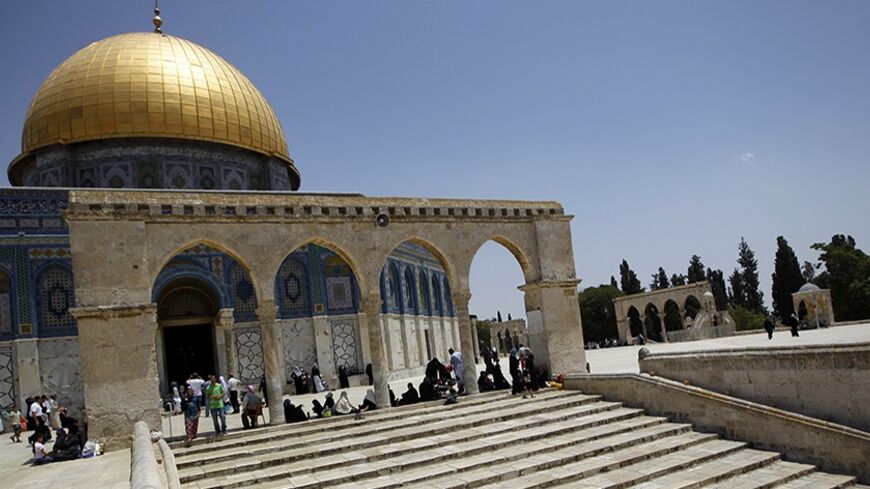 People visit the compound known to Muslims as Noble Sanctuary and to Jews as Temple Mount in Jerusalem's Old City, where the Dome of the Rock (left) and Al-Aqsa mosque (not seen) stand, May 18, 2012. - REUTERS/Ammar Awad

French Imam Hassan Chalghoumi is a busy man. Having come back from Israel just a few days ago, he is already preparing his next trip. He has scheduled for the coming months not one visit but at least four more pilgrim voyages. And no, he is not going to Mecca, but to Jerusalem. He is a man with a mission.

Chalghoumi's life journey is unique. The young Muslim leader arrived from Tunisia to France 17 years ago, after studying in fundamentalist madrassas both in Syria and Pakistan. He called for jihad. But his encounters in France and elsewhere brought a profound change, and he has become an ardent supporter of the bill proposed by former French President Nicolas Sarkozy against wearing the burqa in public spaces. His position brought on him the wrath of extreme Muslims in France, but the more they opposed him, the more moderate his discourse became, preaching for tolerance and dialogue.

In November 2012, Chalghoumi made another bold move. He headed a delegation of 19 imams on a first-of-its-kind visit to Israel, under the auspices of the French Embassy in Tel Aviv. The Muslim religious leaders visited the Yad Vashem Holocaust museum and prayed by the graves of the Toulouse shooting, where three children and a teacher of a Jewish school were murdered in March 2012 by a young French-Algerian Muslim.

Their visit received extensive media coverage, on the backdrop of growing anti-Israeli emotions in France and elsewhere in Europe.

Chalghoumi tells Al-Monitor that he was adamant to take this voyage further, to the next step, bringing to Israel and to the Israelis not only men of religion, but members of his own community. Ordinary French Muslims of all origins: "I want both societies to meet. To initiate a dialogue. To converse. To share our humanism. I believe in opening doors," he said.

And so he did. In mid-January, the imam accompanied a group of some 50 men to Israel and the occupied territories. They prayed in the Al-Aqsa Mosque on Friday, walked the streets of the Muslim quarter in Jerusalem's Old City, spent a day in Acre meeting with Israeli Arabs of the north and visited Ramallah and Bethlehem. They were also hosted at the residence of the French ambassador in Jaffa, where each of them received the pilgrimage certificate. "The group's participants have experienced Israel firsthand, in a way they had never anticipated. All of them are determined to come back and bring their family members with them," he tells us.

Besides traveling to the Middle East on different missions, Chalghoumi heads a mosque in Drancy, on the outskirts of Paris. A place name that holds a particular symbolism in the collective memory of French Jewry. The train station of this quiet impoverished Parisian suburb was chosen by the Nazis as a main departure point for thousands of Jews toward Auschwitz. French, German and Polish Jews captured by the Nazis were brought to the Drancy internment camp; last stop before the final solution.

Chalghoumi does not believe in coincidence. He feels that he was destined to work in Drancy by divine provenance. Israel's ambassador to France, Yossi Gal, is also amazed by this turn of history. He tells Al-Monitor about the efforts deployed by the imam in building a dialogue between the Muslim community and the Jewish people: "Imam Chalghoumi is a great believer in dialogue and intercultural exchange," he says. "We are working together to appease the spirits and bring greater understanding, despite the rise of anti-Semitic incidents over the last year."

Indeed, relationships between Muslim communities and Israel are complex. In Europe, the Israeli-Palestinian conflict seems to have little room left for dialogue.

But Chalghoumi is not alone in pursuing interaction. French-Algerian intellectual Ghaleb Bensheikh heads the World Conference of Imams and Rabbis for Peace. His brother, Soheib Bensheikh, former mufti of Marseilles, is also acknowledged in Europe as one of the leaders of moderate Islam. He has published numerous books and research on Islam within modern democratic society, with emphasis on the meeting points between Islam and secular France. Another proponent of tolerant Islam is Imam Tareq Oubrou, director of the Bordeaux mosque. All three, together with the younger Chalghoumi, represent an Islam which does not withdraw into itself.

The imam of Drancy stretches intercommunity dialogue even further. He does not shy away from dealing with the phenomenon of the rise in anti-Semitic incidents in Europe, in relations with Israel and the Middle-Eastern conflict. He is going both to Jerusalem and to Ramallah. He is sure that many of his countrymen will follow.