President Reuven Rivlin has become the one voice that Europeans refer to when they seek Israeli figures ready for Mideast religious coexistence. 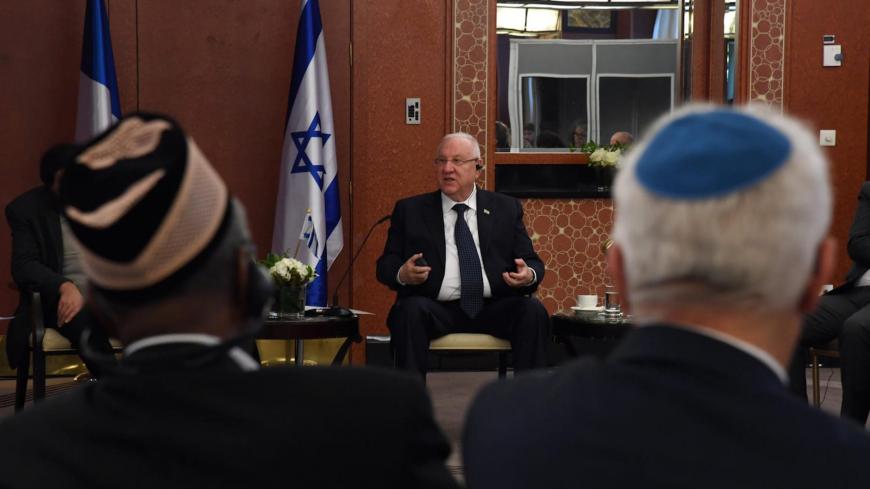 President Reuven Rivlin chaired on Jan. 23 a moving meeting in Paris between leaders of the Jewish and Muslim communities in France. Rabbis and imams sat in a circle and spoke with the Israeli president about dialogue and coexistence between religions and communities in both Europe and the Middle East. While journalists assisted the events, questions were reserved for the participants so they could express themselves freely. In fact, the president did the same.

"There is a widespread belief that religion is at the heart of ethnic tension. But this is a mistake. The belief that links Judaism and Islam must be the key to peace, not a justification for violence. Now, when nationalism and religious extremism are rising in the world and in the West, your leadership is vital," said Rivlin.

This Paris meeting took place at the request of Rivlin, who has in recent years been leading calls to establish and expand interfaith dialogue in Israel and in the region. For Rivlin, the linkage between the Muslim world opening up to ties with Israel and a positive interfaith dialogue is clear. The visits of Netanyahu to Oman and Chad and the discreet contacts with other Gulf states could catalyze warmer relations between Jews and Muslims elsewhere.

Associates of Rivlin explained that the president is generally keen on promoting public dialogues between communities wherever he goes, be it Israel or abroad. When the visit to France was decided, it was obvious that such a meeting would be in the offing. "France is home to the biggest Muslim community in Europe and also to the largest Jewish community in Europe, so the president was very interested in having such a meeting here. Initiatives like this one present concrete steps in the president’s battle against neo-fascist movements, against the rise of anti-Semitism and racism, against extremism and in favor of coexistence. These are all battles that he is truly committed to," said a source close to Rivlin who was speaking on condition of anonymity.

Indeed, in recent years Rivlin’s voiced his convictions on several occasions. In 2014, he was the first sitting Israeli president to participate in the annual memorial ceremony commemorating the 1956 Kafr Kassem massacre, where 43 Israeli-Arabs were killed. His presence there was perceived as a call for Jewish-Arab reconciliation and coexistence. Since then, he has multiplied his calls for mutual respect between all communities and groups composing the Israeli society.

Rivlin’s proactive approach could be explained in part by his upbringing in Jerusalem, which is home to Jews, Arab Muslims, Christians, Armenians and more. "This meeting reminds me of my childhood when I learned that it is possible to find a common language between different peoples and religions. I was brought up to understand the importance of knowing and fully understanding the beliefs of other people," said Rivlin in Paris.

There is more. Rivlin often tells about his father, educator and scholar Joseph Joel Rivlin, who translated the Quran in 1936. The descriptions of his Jerusalem childhood and of his father certainly add to the president’s credibility on his campaign for interfaith dialogue. While most Israeli-Arabs probably reject the president’s political right-wing views and his Likud political home, they are not insensitive to his efforts of battling voices of hatred and discrimination.

That being said, the political issue was still present — at least partially — during Rivlin’s Paris trip. Ever since he took office, Rivlin has been careful over expressing his political beliefs, especially his rejection of dividing the land of Israel. But some of his positive statements also generate question marks. On the backdrop of Israel’s occupation of the West Bank, his affirmation that Israel offers total freedom of religious practice might sound to some out of place. Rivlin also boasted that Israel’s democracy offers equal voting right for all its citizens, ignoring Palestinians under occupation deprived of that right.

Several Muslim dignitaries showed up for the Paris interfaith meeting, including Imam of Drancy (a suburb of Paris) Hassen Chalghoumi, Imam of Marseille Mohammed Aziziz, Abdelhak Aouinti of the mosque Les Ulys, Mohammed Galmin of the Bobigny mosque and others. All people of good will. Imam Chalghoumi has been championing in recent years Muslim dialogue with Jews and Israel and had visited Israel in the past, heading a group of French and French-speaking imams.

Chalghoumi told Al-Monitor the recent visits by Prime Minister Benjamin Netanyahu to Oman and Chad and Israel’s outreached hand to Bahrain and Abu Dhabi contribute greatly to the dialogue between Muslim and Jews, and he feels the Arab world is now open to this kind of public debate while Europe is threatened by growing extremist movements.

But for a true interfaith dialogue to be conducted, Rivlin would have to get other people also to the table such as the more senior religious Muslim leaders in Europe, who can really influence public opinion, and people who generally also speak out more strongly against Israel’s policies. This is still not the case. The elephant in the room, namely Rivlin’s political positions, might push away some of his potential interlocutors.

That being said, Rivlin has shown courage by carrying the banner of dialogue in an era where hatred of Arabs and Muslims is proliferating, both in Europe and inside Israeli society. In a speech he delivered at the state dinner offered to him by French President Emmanuel Macron Jan. 23, Rivlin reminded the audience that "Israel’s Declaration of Independence proclaims that the State of Israel will be established on the principles of freedom, justice and peace, as preached by the prophets of Israel, and will uphold complete social and political equality for all its citizens."

Many European leaders have given up on Prime Minister Benjamin Netanyahu, estimating that he is not ready to let go of Israel’s occupation policies. Macron, for instance, had postponed then canceled a trip to Israel that was scheduled to take place during the Israel-France cross-cultural season that ended November 2018. For Macron and others, Rivlin is perhaps the only voice of sanity within the Israeli right-wing leadership and their only hope that more right-wingers would take a similar, more humanistic path.