Young women working in Iraq's nightclubs, casinos and even cafes often find themselves at the mercy of unscrupulous business owners and even mafiosos, in addition to suffering from public condemnation and little government protection. 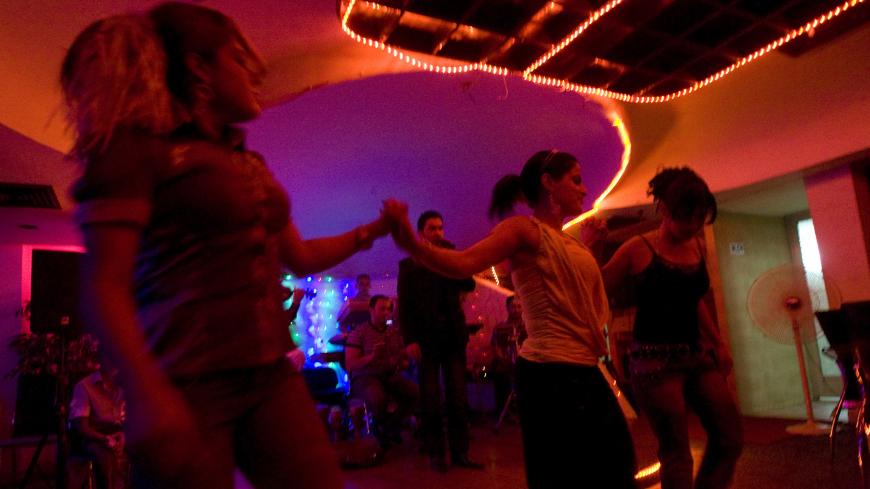 BAGHDAD — The Iraqi parliament's Committee on Women, Family and Childhood revealed Nov. 13 that there are organized criminals behind the work of some female minors in cafes and casinos. The committee said this phenomenon is no different from that of human trafficking.

The next day, an Iraqi radio station reported the story of a 17-year-old girl who works at a nightclub in Baghdad. “I have to work because I need money” to support herself and her mother, she said. "The owner of the club raped me more than once." She also said she is subjected to beatings almost daily.

Another girl, however, told Al-Monitor on condition of anonymity that some cafes and nightclubs operate aboveboard and provide desperately needed employment opportunities for young women. “I managed to work at a relative's [place] because I needed money and the casino owner agreed to temporarily hire me for humanitarian reasons.”

Regardless of the situation, in conservative societies such as Iraq's, girls and women who work at casinos, nightclubs and even coffee shops are often frowned upon.

Also, as women rarely get involved in this field of work, when they do it often draws media interest. One example is a woman from Nasiriyah who decided Jan. 20 to open a family coffee shop, the first of its kind in the south. The opening was widely covered by local media. Yet while this woman showed courage to embark on a nontraditional career path, other women have faced obstacles. On April 27, the Wasit Governorate Council voted by a majority to ban girls from working in cafes.

Some people still hold extreme views about women working in general, "even though [women] account for 49% of society," Intissar al-Jubouri, the rapporteur of parliament's Committee on Women, Family and Childhood, told Al-Monitor. As there are more job opportunities for men than for women, “The employment of girls in cafes, casinos and other sectors is a must because of the need for money," she added.

“The delay in the enactment of the Social Security Law is one of the causes behind the exploitation of girls in some places of work, where they have to endure persecution and harassment because of the need for money,” she said. “The Iraqi Constitution obliges the government to provide a decent living for citizens." She blamed the law's delay on the budget deficit.

"Human trafficking is rampant, even in some displacement camps,” she added. “I visited the Ministry of Interior to closely monitor the magnitude of … human trafficking, and I was surprised by the lack of statistics" despite the ministry's "obvious efforts to fight the phenomenon.”

“There are girls who run away from their families because of violence, and they resort to working in suspicious places. What worsens the situation is that Iraq lacks centers that accommodate battered women,” she said. “The absence of the culture of reporting about violence to security and competent authorities makes it easy to exploit women in human trafficking."

Ali Akram al-Bayati, a spokesman for the United Nations High Commissioner for Human Rights in Iraq, told Al-Monitor, “There is confusion in the social and legal assessment of the work of girls.”

He pointed out, “The right to work is guaranteed in accordance with international conventions and the constitution. The state has to provide suitable conditions in order for citizens, especially women, to have access to financial resources that allow them to live above the poverty level.”

Bayati added, “The social status of girls is still weak, and they may fall prey to exploitation because of poverty and destitution."

His point of view coincides with that of a resident of Baghdad's Karrada district, where nightclubs and casinos are widely spread. Karrada residents complained to authorities about the "recreational places,” she told Al-Monitor on condition of anonymity. She confirmed the clubs employ "girls who pretend to work as waitresses or female service workers but do otherwise behind the scenes."

Ali Jaber, a legal expert and former judge, told Al-Monitor, “Iraqi laws protect girls who are 15 years old and above during their work in cafes, casinos and other sectors that are approved by the Ministry of Tourism and security authorities.” But to many people, the only acceptable jobs for women are in certain home-related sectors or government departments. Those who work in shops, cafes, entertainment, nursing or the transportation sector (taxi/truck drivers) continue to be conspicuously frowned upon.