Authorities in Baghdad have begun to encroach on personal freedoms, closing cafes even when they only serve coffee and tea after Ramadan fasting is over. 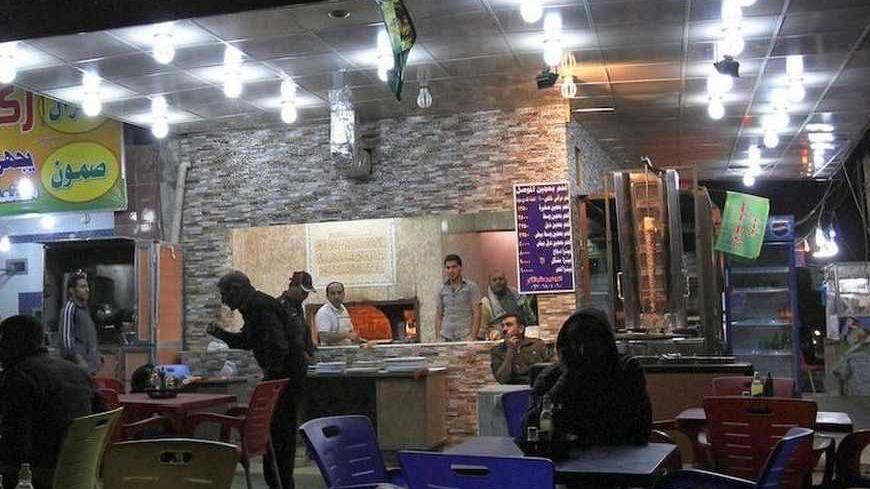 People sit outside a cafe in Baghdad, Dec. 1, 2011. - REUTERS/Shannon Stapleton

Suddenly, and without warning, the local Baghdad authorities decided, on the eve of July 17, 2013, to ban youth-oriented cafes operating in the center of the city. The authorities organized, with the cooperation of gunmen and volunteers, a campaign to shut down these cafes under the pretense that they were “incompatible with traditions and morals,” despite these cafes only serving tea and coffee at the end of the fasting day during the month of Ramadan.

The shock engendered by the Baghdad campaign was because it occurred almost one month after Baghdad’s new governor, Ali al-Tamimi, took office representing the electoral bloc of Shiite cleric Muqtada al-Sadr, which branded itself, during the latest local elections, as the defender of “the civil state” after entering into an alliance with cleric Ammar al-Hakim’s movement.

Baghdad’s former governor, Salah Abdul Razzaq, who is a member of Iraqi Prime-Minister Nouri al-Maliki’s Islamic Dawa Party, had led throughout the past years continuous campaigns to close nightclubs and shops that sell liquor in Baghdad. These were attempts that a broad spectrum of citizen defenders of the civil state considered a violation of public freedoms.

But, the new campaign that began in the Karada neighborhood of Baghdad’s commercial center seemed unusual and coincided with unknown people hanging posters signed by the “Karada clans” on the walls of closed cafes, claiming that their closure was a popular demand. The move was accompanied by the governor of Baghdad forming a special “emergency unit” tasked with prosecuting the owners of these cafes, and the local police affirmation that the closures were because the cafes employed underage females.

The spokesman for Baghdad Operations Command, Saad Maan, stated, “Orders were issued to close cafes that employed underage females as waitresses,” and “The Interior Ministry had carried out those orders pursuant to laws aimed at preventing the exploitation of minor female workers.”

Maan denied that “security measures would be undertaken against any of the remaining cafes,” while calling for the need to “take a decision allowing cafe owners in Karada to resume operations once they stopped employing underage female workers.”

But police statements were inconsistent with facts on the ground where cafes that did not employ women or underage female waitresses were also shuttered as part of the campaign.

Iraqi journalist Hussein Ali, who witnessed the campaign in action, told Al-Monitor: “Dealing with cases of cafes employing underage females is different than these type of campaigns where religious slogans are raised against places in which young people gather. These cafes were not subject to previous inspections aimed at determining the ages of female employees, and were never subjected to prior legal fines or sanctions. What occurred here was that clan and partisan groups raided these cafes accompanied by the police, and unjustly closed them down.”

Iraqi journalist and activist Mazen al-Zidi commented to Al-Monitor, saying: “The state must, at all times, adhere to the law in dealing with any phenomenon whose legality is suspect. The biggest danger is when the state loses its legal compass.”

A few months ago a carbon copy of the Karada incident occurred in the Kadhimiya neighborhood (north of Baghdad), where religious parties organized, in the name of “clans and notables of Kadhimiya” a campaign to bar non-veiled women and young men with long hair from entering the neighborhood under the pretense that theirs was a “holy city” because it contained the shrine of Shiite Imam Moussa al-Kadhim. The same neighborhood was previously the scene of a horrendous killing campaign targeting young emo music lovers who were accused of being homosexual.

Despite that religious (Shiite) parties and movements are to blame for these events, Sunni religious movements that control other Iraqi cities also imposed strict restrictions on public freedoms under the pretext of safeguarding “decency” and “adherence to the teachings of Islam.”

The point of separation between Iraq being similar to Iran or Afghanistan and it being a modern civil state, is one that the Iraqi constitution dealt with in Articles 14 through 46.

All these legal articles characterize the continuous religious campaigns aimed at limiting the personal freedoms of Iraqi individuals as attempts to “violate the constitution,” which are made even more complicated and bizarre by official authorities tasked with defending the constitution — such as security forces, local governments and the central government — all partake in such violations in an open manner.