Although religious and conservative groups call for limiting the role of women in Iraqi society, women continue to flourish in the business and educational worlds. 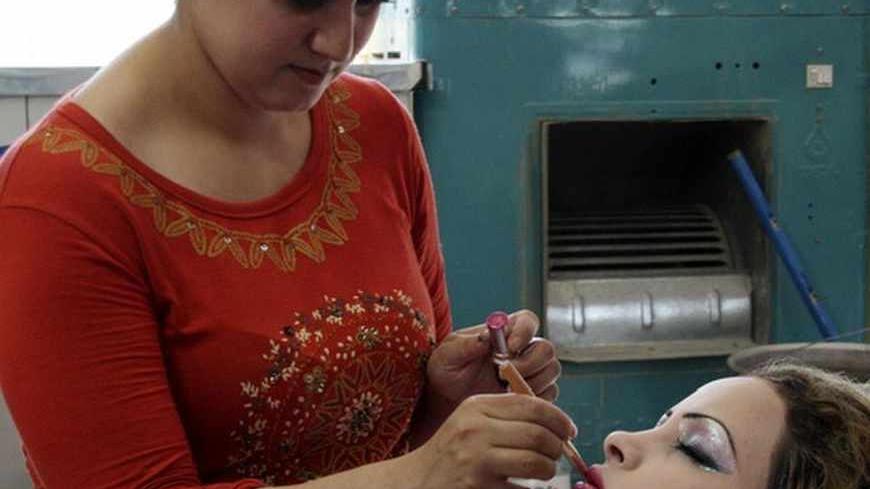 A woman applies lipstick at a beauty parlor in Baghdad Sept. 21, 2011. - REUTERS

Iraqi society has witnessed a growth in the role of women, who are joining fields of work that were once limited to men and beginning to wear a more modern form of hijab, distinguished by the way it is worn and by its unique colors. Iraqi women — both Muslims and non-Muslims — were known for decades for wearing traditional black cloaks.

Despite rigorous calls by religious parties and conservative groups, media, social and even economic openness to the world — as well as Iraqi women’s will to live by their own beliefs — have caused women’s activities and projects to flourish. These include beauty salons, women’s massage parlors and gyms, casinos, shops and businesses that are either owned by women or employ them. The steady increase in the number of female university students is one of biggest the signs of the growing role of women in Iraqi society.

Sabrine Hassan, a social researcher from Baghdad, tells Al-Monitor that “When walking around university campuses, you will notice female students wearing the latest fashion trends and keen to look chic. However, most of them are wearing a modern form of hijab.”

In the Faculty of Engineering at the University of Baghdad, Reem Saleh tells Al-Monitor that “20 female students are studying electrical engineering and will graduate from the engineering faculty. This is a good percentage compared to the total number of students, which is 40.”

The university campus is a sort of microcosm for all of Iraq. Yet it differs from the general climate that prevails in the country, as mixed-gender groups of students walk freely in the corridors of the university. In one corner, a male student makes conversation with a girl.

Reem believes that this isn't new, saying, "Iraqi universities have been known for their openness and the role of women, since the first Iraqi university was founded.” She added, “In the 1970s, girls in universities were known for being dressed up and they rarely wore the hijab. However, the exact opposite is true today.” Reem stressed that “The modern form of hijab has become a fashion trend and a social necessity, before being a religious obligation.”

Today, beauty salons, which were a common social nexus of the past, have taken on a modern flair and are widespread in most cities. They have lately gained particular importance since they started resisting “restrictions” and tight official and religious-monitoring procedures.

Wisal Tamimi succeeded in making the beauty salon she owns in the city of Babel unique in terms of its modern décor. Speaking to Al-Monitor, she said that “criticism by hard-liners are not as rife compared to previous years.”

Tamimi recounted that “One morning, bearded men came in and gave me some advice on ethics and social customs,” requesting that she “remove the photos of Western actresses from the storefront and close the shop.”

She added, “Iraqi people view barbershops and beauty salons with an eye of suspicion. Yet they continue to visit them because of their need for beauty.”

Cosmetic surgery among Iraqi women has become very common, and does not cause much debate these days within Iraqi families. This is true despite the conservative mainstream that urges women not to display their beauty and not to take care of it excessively, as this is considered a mark of Western influence.

Plastic surgery has become an obsession to the point that some female beauty salons have been turned into secret beauty clinics.

Speaking to Al-Monitor, cleric Baqir al-Husseini from Karbala (southwest of Baghdad) called for “scrutinizing every suspicious matter that could lead to immorality,” and stressed that “small mishaps pave the way for great sins.” He emphasized the point that “Women are not tools to display beauty and cause excitement.”

He added, “Enriching the community with Islamic appearances is a [religious] duty. However, this does not mean that beauty salons that are not committed to Islamic teachings should be closed.”

Ruqiyya Kamel, who owns a beauty salon in Baghdad, told Al-Monitor that she “cannot distinguish between what is Islamic and non-Islamic when it comes to her beauty salon.” She added, “There is nothing suspicious in my work, which is respected by everyone. I run my business in broad daylight.”

Rajaa Ali, an academic and feminist activist from Babil, told Al-Monitor, “All of these calls for conservatism and the activities of extremist groups will not succeed in preventing society from obtaining its needs, regardless of the position of Sharia on this matter.”

Ali stressed that “Women do whatever they can to please men, and beauty is an innate need.” She added, "Any activities related to women’s body and beauty matters are rumored to be suspicious activities. Women’s necessities stores — especially underwear shops — as well as casinos and slimming and fitness centers are all questionable and dubious in the eyes of conservatives and hard-liners.”

On the other hand, Raad Kama, a conservative teacher from Baghdad, told Al-Monitor that he “refuses to grant full trust to such places,” confirming his belief that “Most of them are dubious due to evidence of their involvement in acts that are in direct conflict with social customs.”

However, speaking to Al-Monitor, Kareem Abbas, the owner of a women’s clothing store, warned against “those who make claims without backing them up." He said, "However, since we live in patriarchal society, people accept these claims because they are in line with their ego and dominance.”

Beauty and fitness centers for both men and women are widespread in some Iraqi cities. Nevertheless, Amal Hussein, who spent about 20 years in Germany, told Al-Monitor that she would rather work out at home because the fitness center she went to in Babil was not very encouraging, as she felt strange and the place felt like it was closing in on her.